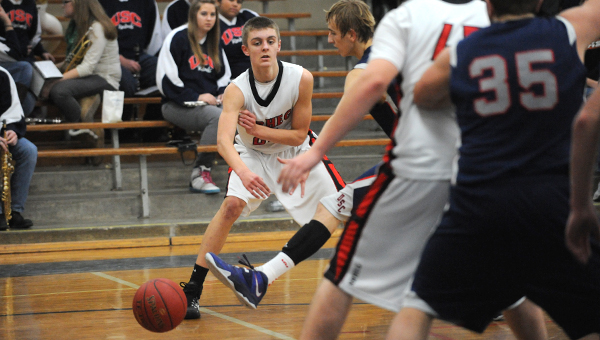 For the first time since 2004, The New Richland-Hartland-Ellendale-Geneva boys’ basketball team started 5-0, but United South Central didn’t make it easy.

The Panthers were forced to erase a 9-point deficit with less than four minutes left in regulation Tuesday to defeat USC 68-67 at Wells.

“It was a credit to our kids hanging in there and hitting the big shots,” said NRHEG head coach Pat Churchill. “Fortunately, we found a way to win. I don’t know how, but we found a way.”

USC led 36-30 at halftime, and a 3-pointer by Luke Trio — who connected from beyond the arc six times and scored a game-high 26 points — boosted the Rebels’ lead to nine with 3 1/2 minutes left.

A 3-pointer from the right corner by Oakley Baker helped the Panthers claw back within four points, and Ryan Patraw nailed another shot from downtown to cut NRHEG’s deficit to one point.

“Those shots gave us a little life back,” Churchill said.

With 1 minute left, USC led 67-66 and NRHEG had the ball. Baker curled around a pick at the right elbow and drilled an open jumper in the lane to give the Panthers their first lead of the second half.

“It wasn’t necessarily designed for me, but when we ended up going through the play, my teammates got me the ball and I was able to knock it down,” Baker said.

With five seconds left, USC’s Steve Voigt was sent to the free-throw line for two shots after he grabbed an offensive rebound. The front end rimmed out and so did the back end.

“We knew we had one good run left in us, and we started hitting some big shots and finally getting some defensive rebounds,” Churchill said. “It was just a really nice victory for our kids. I couldn’t be happier for them.”

The Rebels won the last four meetings between the two teams, dating back to 2010.

Since the first game of the regular season, the Panthers have come a long way in terms of balanced offensive production. In NRHEG’s season opener against Mankato Loyola, Spencer Tollefson and Kalis combined for 55 of the team’s 70 points. Against USC, five Panthers scored in double digits. Baker led the way with 16 points, Tollefson added 15, Trevor Tracy scored 12, Kalis, 11 and Patraw, 10.

To go along with Trio’s barrage of 3-pointers, Nate Pederson scored 14 points and Voigt added 10 for USC.

“At times we had some good shots that just didn’t go down,” he said. “For a while we were making them, and that got us the lead. It just wasn’t big enough.” 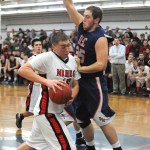 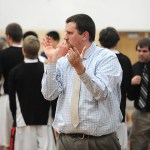 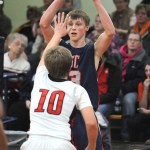 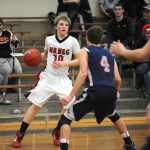 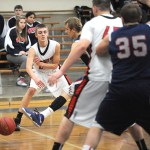