How it works: Cleaning up wastewater 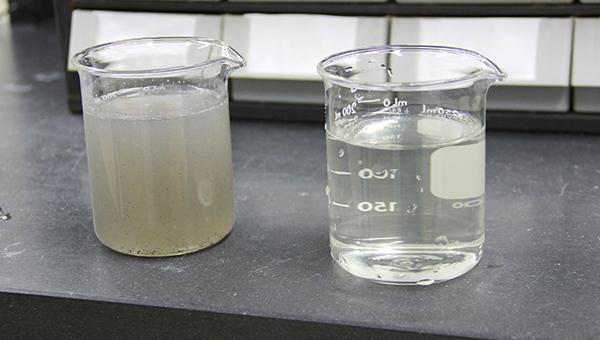 Water before and after treatment. — Sarah Stultz/Albert Lea Tribune

It may perhaps be one of Albert Lea’s most important resources, yet it is likely the least understood.

How does all of the wastewater get from homes and storm drains to the plant? And what happens after it gets there?

Ashling said all of the wastewater in the city is collected and pumped there through 117 miles of pipe. There are five miles of forcemain to transport the water to the plant.

Once it arrives — looking dark gray and cloudy — it goes through a series of steps and treatment before it comes out looking clear. The biosolids taken from the water are applied on about 600 acres of farmland, Ashling said.

“A wastewater treatment plant is the most misunderstood department of the city,” he said. “It is the first line of defense against disease.”

The city’s drinking water, which is collected through wells, goes through a separate treatment process at a different location.

Ashling said when wastewater arrives at the plant through the forcemain, first it is fed into two aerated grit chambers. The chambers use gravity to remove sand, gravel and heavy grit. The grit is collected in a Dumpster and then hauled to a landfill.

From the grit chambers, the water goes into clarifiers, which remove a significant portion of any suspended solids. The solids settle slowly to the bottom of the tank and are pumped to anaerobic digesters.

After the water is clarified, it goes into a secondary treatment in four aeration tanks and two secondary clarifiers.

From there, it goes through steps called nitrification treatment and effluent filtration. Ultraviolet disinfection is the final step.

An underground pipeline carries the treated water to discharge into the Shell Rock River. The sludge collected is held for 12 months before it is applied on nearby farmland.

Ashling said about 10 million gallons of sludge are generated, but after a process called dewatering, that is taken down to 4 million.

Staff test samples of the treated water each month and report their results to the Minnesota Pollution Control Agency.

The plant is staffed by nine full-time employees for about eight hours on Mondays through Fridays and for four hours on Saturdays, Sundays and holidays.

In addition to treating wastewater, staff at the treatment plant started collecting weather data for the National Weather Service in the 1970s. They collect temperature, rain and snow. The numbers are reported to the weather agency. 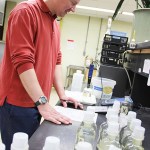 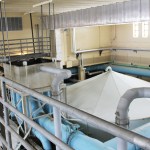 The water goes through sand filters at the end of the treatment process. — Sarah Stultz/Albert Lea Tribune 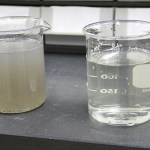 Water before and after treatment. — Sarah Stultz/Albert Lea Tribune 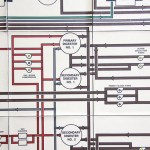 A diagram at the plant shows what parts are being used. — Sarah Stultz/Albert Lea Tribune 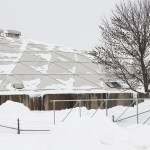 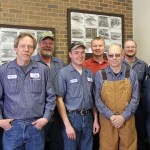 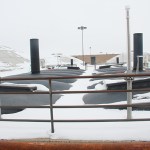 Wastewater goes through multiple steps of treatment at the facility. In the end, sludge from the water is applied onto farm fields, and the treated water is discharged into the Shell Rock River. — Sarah Stultz/Albert Lea Tribune