How they get their kicks: Northland Karate owners share why they enjoy martial arts 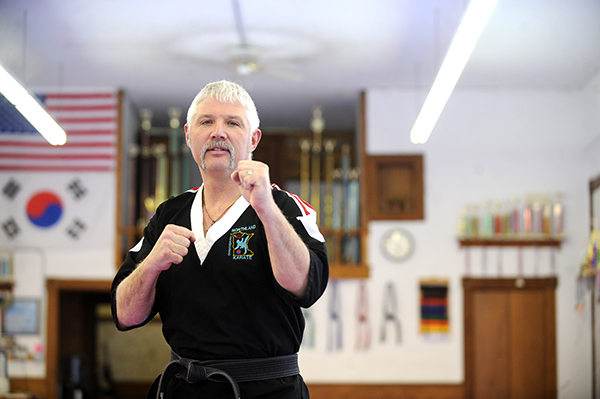 Dana Nelson, a co-owner of Northland Karate, gets in his stance in front of numerous trophies and medals at the Albert Lea dojang. – Micah Bader/Albert Lea Tribune

Taekwondo is alive and kicking in Albert Lea.

Northland Karate owner Dana Nelson set up a dojang in 1996 on the third floor of the building at 206 S. Broadway to share his love for the sport.

Punching and kicking are involved in taekwondo, but Nelson said that only scratches the surface.

“It’s a lifestyle,” he said. “It’s something that’s healthy, and it’s a total body thing. It helps with focus and flexibility.”

Classes at Northland Karate utilize an American version of taekwondo with 50 percent punching and 50 percent kicking. Nelson said he opted to use the word karate in the business name because it is more recognizable than taekwondo.

“Sometimes it’s best to use a shorter word that everybody knows,” he said.

Nelson, a six-dan black belt, started his journey with the sport when he was 21 years old. He’s a proud member of the Albert Lea community.

“I graduated from high school here, and I was baptized and confirmed here,” he said. “The roots run deep.”

Nelson, 52, and and his wife, Natalie, own and instruct at Northland Karate.

“My wife and I do this together,” Nelson said. “Martial arts has been a big part of our life.”

After spending more than 20 years in the Minnesota National Guard, Nelson retired. He has a background in judo and amateur boxing.

In high school, Nelson participated in wrestling through his junior year, he said. He’s been fortunate to see some of his students apply what they’ve learned on the field and the mat for Albert Lea High School.

Taekwondo is taught to be used only in self-defense, and Northland Karate offers courses that follow that idea, such as a rape-prevention class for women and self defense courses for children.

Nelson said he doesn’t have a favorite class to teach.

“I like it all,” he said. “That’s why I’m doing it. I feel the Lord has blessed me in a teaching capacity.”

Natalie estimated about 30 people attend each class at the dojang. Four hour-long classes are offered. Class times are 4:30 and 5:30 on Mondays with the same times on Thursdays. Nelson said people of all ages participate.

“It’s not just kids,” he said. “It’s adults, too. I’ve even had three generations of students take lessons together.” 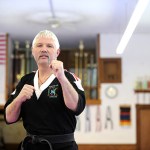 Dana Nelson, a co-owner of Northland Karate, gets in his stance in front of numerous trophies and medals at the Albert Lea dojang. – Micah Bader/Albert Lea Tribune 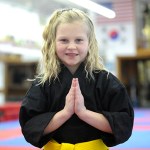 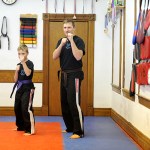 “I’ve been doing this since 2000, and my son, Andrew, has been coming for the last two years,” says Aaron Phillips. – Micah Bader/Albert Lea Tribune 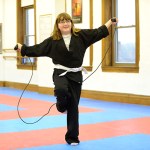 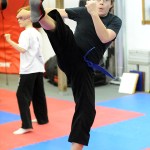 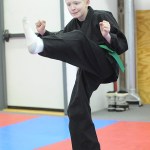 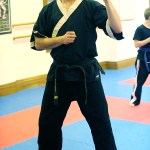 “I have so many favorite parts of coming here. It has a family atmosphere, is a good workout and teaches discipline,” says Derek Nelson. – Micah Bader/Albert Lea Tribune 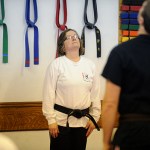