It’s more than gardening: The store is just a small part of Albert Lea Seed House

There’s more than meets the eye when it comes to the Albert Lea Seed House.

Many people are familiar with the garden center, but in this business that has been around since 1923, there’s more going on.

To the west and to the north of the garden center are warehouses. Organic seeds are housed in the west warehouse because it is air conditioned in the summer and remains cold in the winter.

According to Tom Theesfeld, manager of the garden center, the colder temperatures hold the germination of the seed better.

Conventional seeds are in the warehouse north of the garden center which used to be the Smith-Douglass Fertilizer Plant. The walkways near the top of the high ceilings that were in the fertilizer plant can still be seen.

Seeds can be seen packaged three different ways in this warehouse. There are 50-pound paper bags, 2,000-pound super sacks and 2,000-pound pro boxes.

Walking as far west in the building as possible, one will see seed being transferred from a farmer’s truck to a cleaning line. There are two cleaning lines at the Albert Lea Seed House. One is for organic seeds and the other is for the seeds that are not organic. During the cleaning process the seeds travel over three to five different machines depending on what kind of seed it is.

After it is cleaned, the seed is moved into a bagging room. While automated bagging systems are on the market, the bagging at the seed house is done manually.

“The main reason we don’t have an automated system is that we do so many kinds of seeds,” said Mac Ehrhardt, co-owner of Albert Lea Seed House. “We’re changing species all the time, and they have different properties so it’s hard to automate that for the different densities.”

Not all of the seeds that move through the Albert Lea Seed House are processed or bagged there, but the seeds that are have always been a part of what the business does.

“It has to do with what my dad calls ‘basic’ in an enterprise,” Ehrhardt said. “We’re not paying someone to do it for us. It allows us to be basic in some crops. It also is a fun part of the business. We get to choose those varieties and work with the farmers who are doing them.”

On the way back out of the warehouse, on the northeast side of the garden center, is a small room where two overhead mixers are housed. Each mixer holds about 2,000 pounds of seed.

Theesfeld said, mostly, it’s grasses that are being mixed.

Next door to the mixers is a room of about 2,400 square feet. This room is what used to be the sales floor until the current sales floor and office space of 15,000 square feet was built in 2003. The old sales floor is now used for storage.

Outside of the warehouses stand 47 grain bins.

“People always ask, ‘Why do you have so many little tiny bins and not one big bin like an elevator?’” Ehrhardt said. “We’re not an elevator. We need to keep all these different kind of seeds separate.”

Look up when leaving the garden center. Above the sliding doors hangs an unfinished portrait of George Washington. The portrait used to hang in the original Albert Lea Seed House building.

The seed house location at 1414 W. Main St. is the only physical location that the Ehrhardts own and process seed, but they do have three other locations where they store seed in Albert Lea: Profit Pro, Albert Lea Warehouse and Agriguardian. There are also farmers who store seed on their farms until the seed house needs it.

“We don’t have enough space here,” Ehrhardt said. “In one sense it’s a good thing because you feel like your business is growing. That’s a healthy thing. But it’s also expensive.”

Because of that, discussions have been had about building new warehouses, adding on or continuing to rent space.

“We’ve definitely outgrown this space that we’ve got,” Ehrhardt said. “I don’t think we’re going to be moving anytime soon. But certainly adding on to this building is a possibility or building some type of other structure out here.”

The Albert Lea Seed House was founded in 1923 by Lou Ehrhardt. It was a family-owned seed store that offered field seed and farm supplies. Ninety-one years later it is still a family business.

Today, the business is co-owned by Lou’s grandsons, Tom and Mac Ehrhardt. Ninety-five percent of the business is farm seed and the other 5 percent comes from its garden center.

The garden center dates back to the 1980s or a little before, Mac said.

“We’re in the seed business and we understand seed, so it’s natural for us to sell all different kinds of seed,” Mac said. “And we’re here. It’s nice to have that storefront open year-round.”

As far as farm seed goes, seed is not just sold locally. It is distributed throughout the Upper Midwest and other states like Maine. The owners and employees stay involved in the industry by attending meetings and conventions. A web presence has developed, too — not only with a website, but with a page on Facebook.

Locations over the years

1 month, a third of the work is done (some years)

47 bins for seeds outside of the building

25 percent of total business is organic

50 (or about) employees during spring

100 farmers (or about) are on a growing contract

60,000 square feet is the size of the main warehouse

10 million pounds of seed (or more) bagged in a year 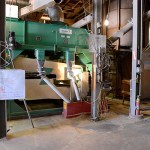 This is the fanning mill that sits on the northwest side of Albert Lea Seed House. – Brandi Hagen/Albert Lea Tribune 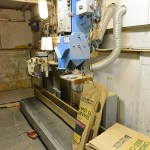 This is one of two bagging rooms. – Brandi Hagen/Albert Lea Tribune 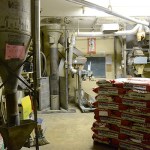 The mixing room is on the northeast side of Albert Lea Seed House. – Brandi Hagen/Albert Lea Tribune 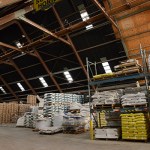 This warehouse sits on the north side of Albert Lea Seed House. It used to be the Smith-Douglass Fertilizer Plant. The walkways of the plant can still be seen near the ceiling. – Brandi Hagen/Albert Lea Tribune