Van Erkel Farms grows everything but the kitchen sink 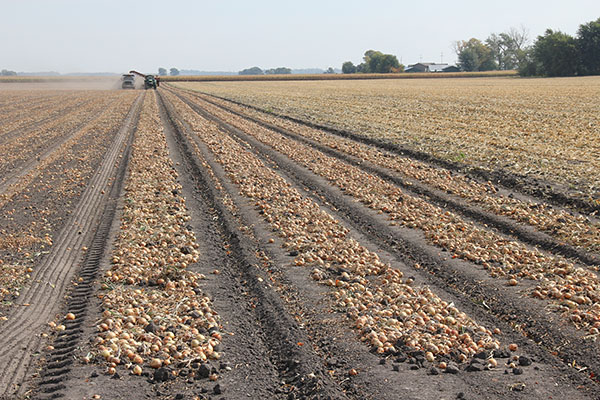 Onions are harvested Sept. 27 south of Hollandale. The
onions are kept in rows until the harvester scoops them up. – Tim Engstrom/Albert Lea Tribune

HOLLANDALE — Van Erkel farms in Hollandale is a true gem, considering it’s one of the few remaining farms in the area that grows vegetables along with corn and soybeans.

“There are two potato growers in Hollandale, the other guy just does a few acres,” John Van Erkel said. “It used to be a bunch — in the heyday there were 20 to 30 growers. Now we’re basically the only one. We’re the only one to do onions, and there’s one other guy who does carrots.”

After graduating high school in 2004 and getting a degree in construction engineering from Iowa State University, the family farm called Van Erkel back after only one year of working in the engineering field. He works alongside his father, Peter, and three other full-time employees, along with a lot of seasonal help. Van Erkel Farms grows corn, soybeans, sweet corn, potatoes, onions and carrots. This year it will grow potatoes for Mrs. Gerry’s in Albert Lea. 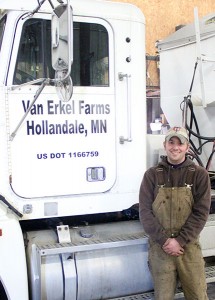 John Van Erkel stands in front of one of Van Erkel Farms’ semi truck. Van Erkel Farms is one of the only farms in the area that grows corn, beans, potatoes, carrots and onions. – Drew Claussen/Albert Lea Tribune

Van Erkel he said he thought the amount of work has led to the drop in vegetable farmers, but added that sweet corn remained strong because of the fact that the soil is good for the crop around Hollandale and you can use the same planter as regular corn.

John is the fourth generation Van Erkel to farm in Hollandale; the farm has been in existence since the Great Depression.

“Actually my grandpa, who’s 91 and still alive and running around, was born here and then they went back over to Holland because they still had some land over there and the Depression didn’t hit as hard over there,” Van Erkel said. “Then in the mid-1930s all U.S. citizens were ordered out of Europe because Hitler came to power. So then they ended up coming back.”

With all their different crops, planting takes a lot of planning and coordination. Van Erkel said most of their sweet corn goes to Birds Eye Foods in Waseca, and some goes to Seneca Foods in Rochester and Lakeside Foods in Owatonna. Because the farm is growing the food for the companies, the companies dictate when the crop is planted.

“It’s all backdated off of when they start the plant in the fall. They want to have to it run full of sweet corn until they’re done,” Van Erkel said. “So they figure out, ‘We need so many tons a day, and it takes this many acres to get it. So you have a 150 acres to plant in these three days.’”

When it comes time to harvest the sweet corn, the food companies take care of that. The sweet corn ends up in grocery stores, either frozen or in a can.

Potatoes are put in the ground in May and carrots go as soon as possible because they are sold by weight, so they want them to have as much time to grow as possible.

“The carrots are at the very end, so they stay in there for a while. It’s the same thing where they’ll call you and say, ‘We’ll need six semi loads today and we’ll need seven tomorrow.’”

Five years after deciding to give up a career in engineering and go back to farming, Van Erkel said he is happy with his decision.

Like most farmers, he’s not a fan of having to live and die by weather forecasts, but knows that it’s out of his control.

“You can plan out the best plan and, especially here, it can be gone in a matter of minutes,” Van Erkel said.

It’s more than gardening: The store is just a…