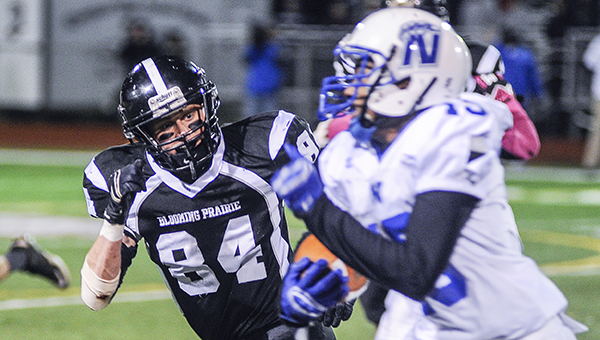 RICHFIELD — The Awesome Blossoms had plenty of chances, but they couldn’t produce any offense after the first quarter as their season came to an end in the Class A state football quarterfinals Friday.

Blooming Prairie forced six turnovers and stopped the Polars (12-0 overall) on downs twice at midfield, but it wasn’t enough in a 14-6 loss to Minneapolis North.

The Awesome Blossoms (11-1 overall) had the ball in Minneapolis North territory throughout the second half, and they had a first-and-goal from the Polars’ seven-yard line when John Rumpza threw an interception in the end zone on Blooming Prairie’s final offensive play of the night.

The Awesome Blossoms had four of their five second-half drives end in North Minneapolis territory as they couldn’t get into an offensive rhythm.

“We just couldn’t make a play in the passing game, which is uncharacteristic for us,” Blooming Prairie head coach Chad Gimbel said. “We had opportunities, but we didn’t make plays when we had to.”

Gimbel said that the Polars’ speed was a factor, and they also did a good job of switching up their defenses.

“They were mixing up who was coming and who wasn’t,” he said. “We were expecting to get shallow routes, and they were dropping linemen taking away the shallows. We couldn’t get off their jams and that hurt us.”

Blooming Prairie junior wide receiver, Anthony Nelson, said it was difficult to get separation from the Polars’ speedy secondary.

“I could get past the guy, but they were so quick that the guy would catch up to me before the ball was there. They played well,” he said. “They gave us opportunities, but we couldn’t capitalize.”

After Johnson’s long touchdown run, the Blossoms’ defense answered the bell. They stopped Johnson on the one-yard line to end the first half, and they held the high-powered Polar offense scoreless in the second half. 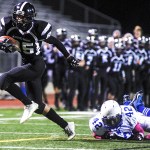 Blooming Prairie’s Tristen Haberman carries the ball on a two-point conversion in the first quarter against Minneapolis North Friday night in the Class A state quarterfinals in Richfield. — Eric Johnson/Albert Lea Tribune 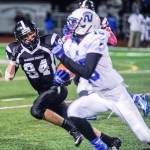 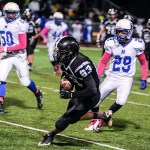 Blooming Prairie’s Anthony Nelson finds room on a reception late in the fourth quarter against Minneapolis North in the Class A state quarterfinals on Friday night. — Eric Johnson/Albert Lea Tribune