The Panthers qualified two grapplers for the quarterfinals produced and a semifinalist Friday at the Class A state tournament at the Xcel Energy Center in St. Paul.

Erickson, ranked No. 2 at 220 pounds, won his first-round bout over Kenyon-Wanamingo’s Luke Rechtzigel with a 10-2 decision, and No. 6 Dillon Kubiatowicz won a 2-1 decision over Barnesville’s Brady Tweeton.

“You never know what to expect here, but with two seniors who had been here before, I was expecting them to be prepared and ready to go,” said NRHEG coach Shawn Larson. “Both of them were.”

Erickson continued his trek toward the title with a 3-2 decision over Tyler Oberg of Dilworth-Glyndon-Felton in the quarterfinals.

“I just listened to what my coaches had to say and controlled the match,” Erickson said.

Erickson said expectations are higher this year than his first trip to state.

“I feel like there’s more nerves,” he said. “Last year was a learning experience. This year, I have a little more of an idea what’s going on and what I need to do.”

In Saturday’s semifinals, Erickson will wrestle No. 5 Manuel Garcia of BOLD.

A single takedown was all Kubiatowicz needed to get past the first round.

“Dillon did a good job of being in position and scoring when he had the opportunity, which was only once,” Larson said.

In the quarterfinals, Kubiatowicz lost 12-3 against No. 7 Brandon Laborde of Lake Crystal-Wellcome Memorial but rebounded with a 7-3 decision over Deer River’s Jamaal Baird in the first round of wrestlebacks.

On Saturday, Kubiatowicz is set to face No. 1 Jared Goldsmith of Chatfield, who was upset by No. 3 Michael Suda of Pipestone Area in the quarterfinals.

NRHEG junior Cordell Peterson lost his first-round match with a 10-7 decision against No. 10 Joel Gadient of Goohue, and Gadient lost in the quarterfinals with a 9-4 decision against No. 2 Austin Anderly of LeSueur-Henderson, which eliminated Peterson. He finished the season with a 31-7 record. 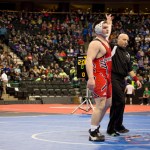 Todd Erickson of NRHEG is declared the winner after wrestling Luke Rechtzigel of Kenyon-Wanamingo Friday at 220 pounds during the first round of the Class A state wrestling tournament. – Colleen Harrison/Albert Lea Tribune 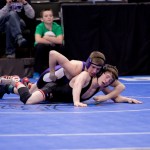 Cordell Peterson of NRHEG wrestles Joel Gadient of Goodue Friday at 126 pounds during the first round of the Class A state wrestling tournament. Peterson lost the match to Gadient at Xcel Energy Center in St. Paul. – Colleen Harrison/Albert Lea Tribune 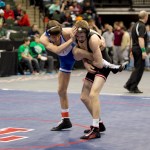 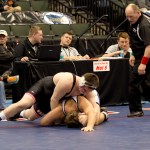