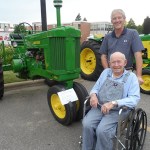 Clifford Buendorf, seated, and his son Clyde enjoy looking at the John Deeres at the 2013 tractor and garden show at St. John’s Lutheran Community in Albert Lea. Clifford was the fifth generation in his family to farm and Clyde is now the sixth generation, along with his brother Dale. -Provided 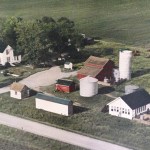 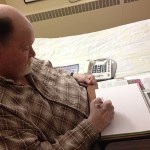 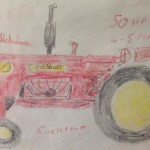 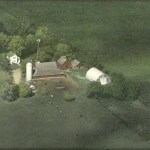 Several residents at St. John’s Lutheran Community have memories rooted in farming, providing a legacy of European immigrants who pioneered agriculture in this part of Minnesota. They recall hard work, hearty meals and healthy senses of humor.

Clifford Buendorf started farming when he was 8 and smiled at a memory of one of his first times driving a tractor.

“Somebody came running up to the house and said there’s a tractor running around the field and there’s nobody on it.” The young Buendorf was standing on the seat of the Minneapolis-Moline but no one could see him from afar. His time on the tractor would span several decades before he moved to St. John’s.

He and his siblings — a brother and three sisters — would milk cows and do other chores before sitting down to breakfast.

Buendorf became the fifth generation in his family to continue the farming tradition. He farmed 160 acres near Walters with his wife, Vernita, raising crops and milking cows. They also raised three sons, two of whom are still farming.

Vernita worked alongside him, washing the milker and separator, moving 10-gallon cans of milk and growing a large garden for canning and freezing. They butchered their own hogs and chickens. The chickens, of course, also provided fresh eggs every day. He recalls the state of Minnesota buying some of his land to build Interstate 90.

His favorite memory was buying his first tractor, a 1968 John Deere 4020. The Buendorfs used John Deere tractors from the Model A, its first true row crop tractor, up to the latest GPS-equipped models.

He also remembers the neighbors gathering to butcher fowl, with some bringing ducks, some bringing chickens and some bringing geese. They would celebrate the day’s work with a big dinner together.

Merlin Wirkus grew up on a farm and later ran his own 209 acres and dairy near Marietta. He grew corn, wheat, oats and flax along with raising hogs for selling to the market in South Saint Paul. His wife, Jean, helped on the farm, tended a large garden and taught school. They also raised two sons who now live off the farm with the land rented to a neighbor. Wirkus remembers doing it all with no computer of any kind. “And that’s the way it was,” he said, rapping his knuckles on the table.

Don Perschbacher grew up on a farm west of Albert Lea near the Armstrong corner, feeding cattle and cleaning out barns. The family also milked about 20 to 24 cows. He recalls going to District 124 School. An Allis-Chalmers WC was their first tractor, and it made all the work easier, he said.

Perschbacher and his wife, Nancy, farmed with their two sons, when driving tractor was his favorite work, along with cultivating and harvesting. He liked farming because, “You’re your own boss,” he said.

Beverly Flinn helped her husband, Richard, farm his family’s place near LeRoy. They lived in a small house while their in-laws lived in the main house. On an aerial photo taken in 1971, she pointed out the corn crib, hog house, barn, well house and flower garden. They raised corn, oats and later soybeans. “I helped in the field,” she said. “I did all the cooking and baking.”

Berneta Krueger Hansen grew up on a farm near Conger. She helped her parents William and Minnie raise corn, oats and “just enough” cattle. Later her parents planted soybeans. The chickens were her main job. “In those days the chickens ran loose so the eggs could be any place. Usually they were on the first floor, hidden in the hay. But they also made nests around the yard,” she said.

She helped cut oats, driving the tractor while her dad ran the cutter, a memory that prompted a laugh. “Our land was kind of hilly and I was going kind of fast one time,” Hansen said. “My dad started yelling whoa, whooooa there. He thought he was yelling at the horses.”

Around age 15, she started working for other farm families instead of attending high school. She remembers babysitting, cleaning house, helping with butchering, making sausages and whatever else needed doing.

“I remember sitting on the davenport, feeding one baby on my arm and one sitting on a pillow, with two more running around,” Hansen said.

She recalled a cute story: When working for Marie Wichmann and family, they used big white coffee cups ideal for dunking cookies. When cleaning kitchen cupboards, Hansen found rows of those cups with the handles broken off. She couldn’t get over why they kept the broken cups. When she was engaged to be married, a bridal shower gift arrived from Marie. Inside the box were all those cups with broken handles. Marie had a keen sense of humor, and the joke still makes Hansen laugh.

She also worked at the Conger store where she graded cases of eggs every day and filled orders called in by families coming to town. All that record-keeping and figuring was done without a calculator or computer.

Her farm work ended when she married, and she and her husband, Edgar, raised two children in Albert Lea.

L.D. Schewe farmed with his wife, Betty, near Oakland, provided welding at farms and performed lawn service before moving to St. John’s. He spends his days now drawing tractors and other farm equipment. He even enters his drawings in the Freeborn County Fair, which continues to showcase agriculture, the top industry in the area, thanks to the hard work of pioneering farmers.