However, No. 7 Mankato Loyola responded with five second-half 3-pointers to eliminate the Rebels 51-35 Thursday in the Subsection 2A South semifinals at Fairmont.

USC coach Stu Hendrickson said his team kept Loyola from finding an offensive rhythm late in the first half.

“We mixed our defenses up, they were throwing up some pretty wild shots and we were there to clean up the rebounds,” he said. “We were forcing a lot of perimeter shots and limiting them to one shot (per possession).”

Anissa Janzig led the Rebels’ scoring attack with 12 points to go with eight rebounds and two blocks. Shianne Robertson led USC on the glass and added a double-double: 10 points and 10 rebounds.

“We’re going to miss those three seniors,” Hendrickson said. “They’ve given us leadership and a lot of good play on the court with three successful seasons at the varsity level. They’ve been good examples and role models.”

In their first game of the postseason on Monday, the Rebels beat Nicollet 75-56. It was USC’s second straight season with at least one postseason win.

“It’s tough to win on the road this time of year, and I was proud of that,” Hendrickson said.

The last season the Rebels had a losing record was in 2007-08, which was the year before Hendrickson took over. Hendrickson’s teams posted seven straight winning seasons.

Last season, USC posted a 19-8 record, and won two postseason games for the first time in 17 years. After beating Martin Luther and St. Clair, the Rebels were eliminated by Loyola 48-41.

This season, USC met Loyola twice before the postseason. The Crusaders edged the Rebels 75-70 in overtime on Dec. 29 at the St. Clair tournament, and USC lost 59-49 on Jan. 24 at Mankato. 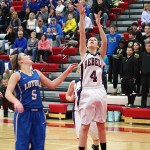 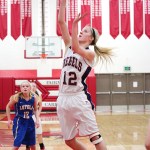 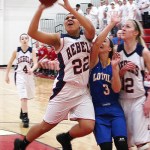 Shianne Robertson of United South Central shoots in the paint Thursday against Mankato Loyola during the Subsection 2A South semifinals at Fairmont. — Kelly Hendrickson/For the Albert Lea Tribune