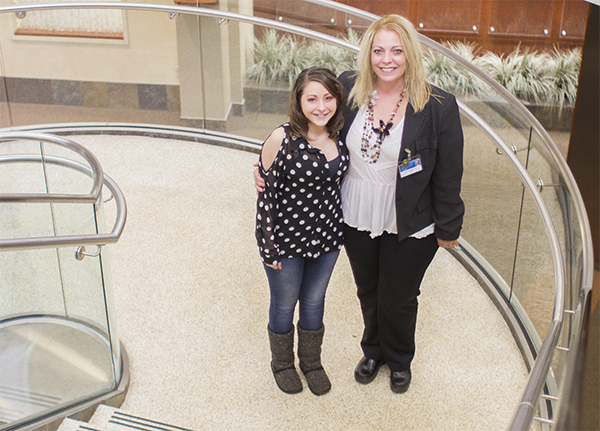 Desiree McPeake, 22, pictured left with Compass Registered Nurse Care Coordinator Sonja Keltgen, was diagnosed with diabetes when she was 4 and depression when she was 15. According to Keltgen, 15 percent of those with diabetes suffer from some form of depression or anxiety. — Colleen Harrison/Albert Lea Tribune

Editor’s note: This is the first in a three-part series about mental health illness.

When Albert Lean Desiree McPeake was 4 years old, she found out she was diabetic.

In the years since, she has suffered from multiple complications, including kidney failure, eyesight problems and even a partially paralyzed stomach. She has been hospitalized numerous times.

“The stuff I’ve had to go through with diabetes — there’s been a lot,” McPeake said.

Now 22, she is also one out of about 15 percent of diabetics who suffer from depression or anxiety.

“No matter if I woke up and it was bright and sunny out, I was just crabby and I was mad at the world,” she said. “I was sad and hopeless.”

Diagnosed with depression when she was 15, McPeake is one of the 43.7 million adults in the United States who experiences mental illness in a given year, according to the National Alliance on Mental Illness.

What is mental illness?

According to the organization, mental illness goes beyond the emotional ups and down from time to time that are caused by events in life.

“Mental health conditions go beyond these emotional reactions and become something longer-lasting,” the organization states. “They are medical conditions that cause changes in how we think and feel and in our mood. They are not the result of personal weakness, lack of character or poor upbringing.”

One in five adults in the United States experiences mental illness in a given year.

For people like McPeake, the stress of managing diabetes every day and the effects of diabetes on the brain may contribute to depression, according to the National Institute on Mental Health.

McPeake said though depression symptoms are different for everyone, she has felt “crabby and angry” and like she wants to cry. Sometimes she has felt like she didn’t want to be around other people.

In addition to depression, she was diagnosed with anxiety after she had kidney failure in 2013.

According to the National Alliance on Mental Illness, 16 million adults in the country — or 6.9 percent of adults — had at least one major depressive episode in the last year, and 18.1 percent of adults experienced an anxiety disorder.

Sheeba Rahman, psychiatrist at Mayo Clinic Health System in Albert Lea, said anxiety disorders tend to be the most common mental illness. People with anxiety disorders feel anxious on most days and have difficulty being in public places. Doing anything that’s out of their comfort zone can make them anxious, she said.

Post traumatic stress disorder, obsessive compulsive disorder and some phobias are also classified as anxiety disorders, along with bipolar disorder.

With depression, people feel a low mood on most days and may have their daily routine affected by their mood, Rahman said. They may have a loss of appetite or a change in sleep patterns.

How do you get mental illness?

There are four factors that contribute to having mental illness, Rahman said.

First, it could be biological, where something medical is going on in the body that is causing the symptoms.

It could also be something genetic, and doctors would investigate if there’s any family history of mental illness.

Third, it could be chemically induced, and fourth, it could stem from psychological factors such as trauma, she said.

The National Alliance on Mental Illness states half of all chronic mental illness begins by age 14 and three-quarters by the age of 24. Despite effective treatment, there are long delays — sometimes decades — between the first appearance of symptoms and when people get help.

Rahman encouraged people with mental illness to seek treatment. Treatment is different for each person.

How should mental illness be treated?

According to the National Alliance on Mental Illness, only 41 percent of adults in the U.S. with a mental health condition received mental health services in the last year.

For McPeake, treatment has involved working with a team at the hospital including a psychiatrist, a medical expert and Sonja Keltgen, a registered nurse Compass program care coordinator at the clinic. The program works with patients who have depression coupled with diabetes or heart disease.

Keltgen said depression makes it harder to cope with diabetes, but she thinks McPeake has been successful because to the close connection on her care team.

McPeake said if she has any problems, at any time, she can contact Keltgen, and she has benefited from the support of her care team. She tries to take a positive attitude about her setbacks.

McPeake’s mother, Christie, said she is proud of her daughter.

In the last year alone, she has obtained her GED and has started college through Post University online to obtain her bachelor’s degree in psychology.

“Even though people do battle depression and feel down, they can and hopefully will look more on the positive side,” she said.