Seeking help: Organizations, others encourage affected to not be afraid 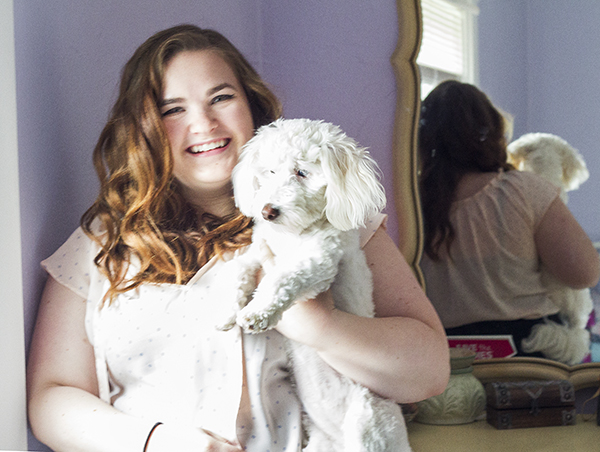 Kessa Albright, 20, pictured with her dog Maggie, was diagnosed with depression when she was 16. See a video online of people from the series at albertleatribune.com. – Colleen Harrison/Albert Lea Tribune

Editor’s note: This is the third in a three-part series about mental health illness.

When Kessa Albright was 16, she was diagnosed with depression.

A further diagnostic assessment when she was a senior in high school revealed Albright, who is now 20, had clinical depression, anxiety, post traumatic stress disorder and borderline personality tendencies, but Albright said they’re just a bunch of names on paper.

Albright, who has lived in Albert Lea since she was 15 after moving to town from Wisconsin, said her symptoms first started showing up when she was 10 or 11 years old. It was at that age when Albright said she started to hurt herself.

According to the National Alliance on Mental Health, about 20 percent of children ages 13 to 18 live with a mental health condition. Eleven percent have a mood disorder, 10 percent have a behavior or conduct disorder and eight percent have an anxiety disorder.

The most common mental illness is anxiety, according to the National Institute of Mental Health, and the average age of onset is 11.

Albright said it was sad that she started hurting herself at a young age, but commented it’s that way for a lot of people.

Eventually, Albright told her mother about her feelings, and she said her mother agreed it was a problem and went to urgent care before school. It was after that doctor’s visit that Albright began seeing a psychiatrist and tried different doctors and medications.

It was during fifth grade that Albright told her mother about hurting herself by showing her a diary entry she had written about it.

“We had a mother-daughter crying fest,” she said.

Albright said she’s been to many therapists — “too many to remember” — and is still working on getting someone she can see regularly.

She said she started taking Zoloft and switched to Prozac for two years. She’s now on Celexa, Wellbutrin and Vistaril, which is for anxiety and which Albright said is similar to Xanax.

While Albright was getting help for her mental illness, it was during her senior year that she was hospitalized for the first time.

Albright was hospitalized for a suicide attempt, one she said was triggered by the stress brought on by graduation and prom. She said she went to the emergency room late at night and from there she went to Prairie Care, a psychiatric clinic in Maple Grove, and stayed for a week.

While she was there, Albright said she had a lot of denial and wanted to go back to school.

According to NAMI, suicide is the third leading cause of death in people ages 10 to 24 and 90 percent of those who died by suicide had an underlying mental illness.

Albright was hospitalized for a second time in January, after she got home from going to school in Eau Claire, Wisconsin. She said this hospitalization was a better situation as it was more planned out.

“I had to miss work but they were really understanding about it,” she said. Albright has been working at Home Depot for about one year.

The second hospitalization came after a difficult semester at college. Albright said the climax of her symptoms was in June or July of 2014 after a rough breakup with her girlfriend. Albright

said that was the first woman she had ever been in love with.

As Albright lived in a dorm room alone at school in Eau Claire, she began to isolate herself. She said she was skipping classes, not going to her extracurricular activities and was sleeping a lot.

After coming home and being hospitalized, Albright decided to take the fall semester of school off. She has been living in her mother and stepfather’s home in Albert Lea with their three dogs — Max, Leroy and Maggie — and two cats — Annie and Chloe.

During her semester off, Albright said she has been working on herself as well as relaxing and working.

“Not having school is relaxing but boring,” she said. “I love learning. I loved going to school.”

Albright said her family has been very supportive, as well as her new boyfriend she met in August, a boy she met in high school who she recently reconnected with.

“I’m really grateful to have so many people in my life that are so great,” she said. She also said she is lucky to have her support group, as she said many people don’t have that.

“I am totally open to talking about the things I’ve been through,” she said.

Of the responses she’s gotten, Albright said “1,000 percent” of them have been supportive. That support has shown itself recently, as Albright has started a fundraiser to help pay for her outstanding tuition bill at Eau Claire.

Currently, that fundraiser has raised a little over $400.

For the future, Albright’s main goal is going back to school. She’s working towards a degree in journalism and women’s studies.

“It’s kind of something that I have to do for myself,” she said.

For anyone struggling with mental illness, Albright said, though it might sound cliche, talking to someone can help, even if that someone is a pet. She said to not be afraid to seek help, and if professional help isn’t affordable she said there are programs available to help people.

While about 20 percent of Americans live with mental illness, NAMI reports that only two-thirds of those with diagnosable mental illnesses seek treatment. In 2010, 17.9 million out of the 45.9 people in America with mental illness used mental health services. Some of those numbers can be related to stigma, but some groups are working to change that.

Make It OK will present in Albert Lea from noon to 1 p.m. Friday at the Freeborn County Historical Museum. Lunch will be provided at the presentation.

Joel Fienen of North Mankato will present in Albert Lea. Fienen grew up in the St. Peter area. In 1996, Fienen was diagnosed with generalized anxiety disorder, depression and attention deficit hyperactivity disorder. Fienen said he could tell something was up from 1994 to 1996, but he didn’t own up to it until he was in college.

While this is his first time doing a Make It OK speech, Fienen has been presenting with NAMI for about a year. He said he got involved with NAMI because he wanted to get into the community to help reduce stigma and wanted to share his story, as well as help others through a tough time.

“There is hope at the end of the tunnel,” he said. “It will come over time.”

During the his presentation, Fienen said he will educate attendees on mental illness while having audience-geared activities mixed in.

“You will learn something from it, but at the same time you’ll have fun,” he said.

In Freeborn County, a number of resources are available for anyone with mental illnesses, including Mayo Clinic Health System and the Freeborn County Mental Health Center. There is also a regional NAMI office in Rochester that offers education, training and programs.