Removing stigma: Local leader shares story of her own struggle with anxiety 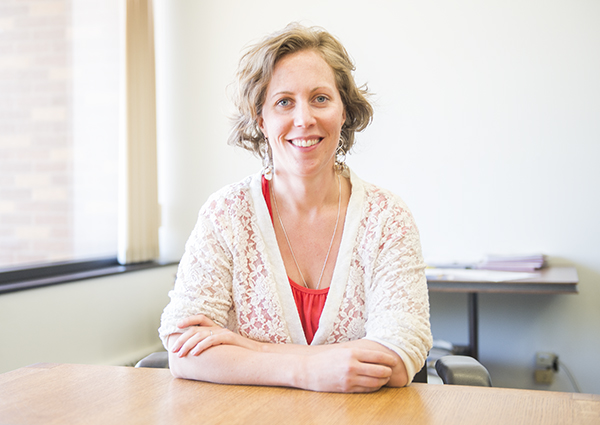 Ann Austin, 35, was diagnosed with social anxiety disorder in her sophomore year of high school. She is currently the executive director of the United Way of Freeborn County. — Colleen Harrison/Albert Lea Tribune

Editor’s note: This is the second in a three-part series about mental health illness.

As the executive director of the United Way of Freeborn County, she is working to bring awareness about mental illness to the area. It’s a topic of particular relevance for Austin, 35, because she has felt the effects of it first-hand for almost 20 years.

When she was a sophomore in high school, attending school in Elk River, Austin said she was diagnosed with social anxiety disorder. Social anxiety disorder is a strong fear of being judged by others and of being embarrassed, according to the National Institute of Mental Health. The fear can be so strong that it gets in the way of going to work or school or doing other everyday things.

“I got to the point I couldn’t go into the lunchroom without extreme anxiety,” Austin said. “They describe it as butterflies in your stomach, but it never goes away.”

She said she would have problems breathing, and her chest would feel tight.

“It was pretty constant around large groups,” she said.

Her parents took her to see a counselor, and she was put on medication and began talk therapy. However, she said the talk therapy did not resonate with her and the medication made her feel numb.

“I didn’t feel any joy or any sadness,” she said. “For me that wasn’t working.”

She decided to take another path, and for her that meant spending a lot of time alone. She said she wrote poetry often and kept a journal. She listened to music and for a time medicated with alcohol.

What ultimately helped her get through that period, she said, was having parents and friends who understood and showed her unconditional love.

In college, Austin said she stopped taking her medication, and she started running regularly and participating in yoga. She continues doing yoga once a week, which she said has helped her breathe through situations that are stressful or that cause anxiety.

But she still struggles with the disorder, particularly when she’s in large crowds of people.

The damage of giving people a label

Though she was diagnosed with social anxiety disorder in high school, Austin said she had some concerning thoughts long before.

She remembers as a young child — being 3 or 4 years old — waiting by the window when her parents would go on dates. She said she would watch for their car, afraid that while they were gone they would get into a crash and die. She had similar thoughts about her friends throughout the years and would plan for the worst-case scenario if something were to happen to those people who were close to her.

She has more recently experienced it with her husband, Nick.

“Anytime I start loving someone I immediately start worrying about losing them,” she said.

She isn’t sure if there was an event that triggered this fear but noted her grandmother, who she was close to, died when she was young.

When she was growing up, Austin said she occasionally had people call her “weird” or “crazy.” Other friends who were diagnosed with mental illness received similar responses from people.

“They don’t know the damage they’re doing by giving people a label,” she said.

She said she realizes now that mental illness is much more common than she thought when she was growing up.

“I thought I was completely different than everyone else,” she said.

“Out of all of them anxiety is probably the most common,” Kossman said.

Though a large number of people are affected by mental illness, he said there are many who are affected who do not seek the mental health services they need to improve their circumstances.

The National Alliance on Mental Illness states of the Americans who have mental illness, only 39 percent received mental health services in 2010. Sixty-one percent did not.

“If a person is struggling with mental health concerns and they seek out mental health services earlier rather than later, I think the outcome for them is a lot better,” he said.

Though the stigma surrounding mental illness has improved some over the years, he said it is important to educate people about what it is and the fact that there are effective treatments for it.

“We need to remove the stigma with everything — everything we put labels on,” Austin said. “We need to see people as human beings just like the rest of us and that we’re here to support each other.”