Fishing with family is key to enjoyment at opener 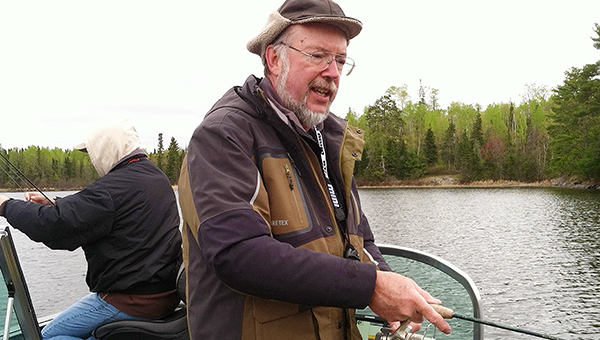 This past weekend, I attended the Minnesota Governor’s Fishing Opener, which was held on beautiful Lake Vermilion south of the Boundary Waters in northeastern Minnesota. The town of Tower is on the east end, and Cook on the west end.

Each year, the event is kicked off by an opening ceremony followed by the community picnic. The picnic is probably one of my favorite parts of the weekend that doesn’t involve fishing. There is live music, entertainment and various vendors with games and displays for folks of all ages.

People come from miles around to enjoy the picnic and take in the festivities. It is always fun to watch the people as they enjoy this event and mingle with the media folks as they gather to listen to the governor speak.

The whole object of this opener is to bring attention to the host community and kick off the Minnesota tourism season. Travel and tourism in Minnesota generates $13 billion in revenue each year.

You could say that Lake Vermilion pretty much has it all. It is a 40,000 acre body of water with both rocky shoreline and sandy beaches. It also has hundreds of small bays and coves along with vast open water.

Fishing is great on Vermilion with many species including walleye, northern pike, muskie, both large and smallmouth bass along with perch and panfish like crappie and sunfish. The slot limit on the lake is 18 to 26 with one keeper over 26 for walleye and 24 to 36 with one keeper over 36 for northern.

There are 365 islands on the lake. Some have cabins and lake homes, and others are just undeveloped wilderness.

The area has many nice resorts and some very nice golf courses.

This weekend was also marked by the dedication ceremony for the Lake Vermilion State Park that includes the Soudan underground mine.

This year, I was lucky enough to bring my grandson, Dylan, along for an experience he will not soon forget. After we registered at Fortune Bay Resort Casino, which was headquarters for the event, we checked in at our cabin at Bayview Lodge, where we met up with my old friend Jeff Anderson, who is a sportscaster from Watertown, South Dakota.

Later that evening, we met the person who would be our fishing host and guide for Saturday’s day of fishing. His name was Bill Conger — no relation to the town — who is a resident of Cook. I could tell right away that we would once again be fishing with someone who truly loved the outdoors and, more importantly, loved the area in which he lived. He has belonged to the Lake Vermilion Sportsman’s Club, which he says is a great organization that has done much for the preservation and improvement of this vast lake. Bill has also served on the school board and has been involved in many other community activities.

He and his wife met in college, and although he was originally from New Jersey and his wife from Cook, they decided to settle in Cook after graduation. There was a time when he didn’t think he would like northern Minnesota, but once they decided to make it their home, he said he couldn’t imagine living anywhere else.

Bill works in the mining industry in sales, but with his vast knowledge of the area, he could easily be a tour guide for the Vermilion area. He told a story about an island on the lake called Gold Island, which was actually prospected for gold in the late 1800s. The quest for gold didn’t pan out — pardon the pun — but it did eventually lead to the start of iron mining in the area.

On Saturday morning, we attended the opening day ceremonies and headed out in search of the wily walleye. With Bill we got the whole package. Not only did he know how to fish walleye, he knew more about Lake Vermilion and the area than I could ever possibly remember.

The Pike River runs into Vermilion, and that is where the walleye go to spawn in early spring.

The Vermilion River is the outlet which flows north to Crane Lake. Bill said that when the Boundary Waters were first being formed, the government wanted to include Lake Vermilion. The lake had already seen a lot of development, especially on the south side, so the residents of the area opposed it and won. The Boundary Waters actually begin about 5 miles north of the lake, and most of the north shore of the lake is undeveloped so there is still a lot of wilderness to enjoy.

Many of the lake’s 365 islands are small and undeveloped, but some are so large you wouldn’t think of them as islands. There are many nice lake homes and cabins on the lake. As a fisherman, I was almost overwhelmed with the lake’s beauty. The kid in me gets excited about fishing by just looking at the beauty of the lake and all of those islands.

Bill said that one of the things he likes about this big lake is that no matter how windy it gets, you can always find a place to fish that is out of the wind. He put us on some fish, and the best part was that we all caught a walleye, which was the species we were seeking that day. We had to go quite a ways by boat to get results, but it was well worth it. Some of the walleye we caught were in 45 to 50 feet of water, but I caught mine in 12 feet or less. Although most of the fish we caught were in the 10-to-12 inch range, I managed to get a 17-incher. Can you say lucky?

Yes, this opener was very memorable, and it was made special not only by Bill, our fishing host, and beautiful Lake Vermilion, but by the many nice folks who live in the area. My grandson, Dylan, probably said it best when he said, “Grandpa, I just can’t believe how nice the people of this area are.”

That about says it all. So if you want to take a vacation that you will surely enjoy and create some unforgettable family memories, Lake Vermilion is the place to go.

You can find out more about the many fine resorts in the area by contacting the Lake Vermilion Resort and Tourism Association @ 1- 800-648-5897 or go to www.explorevermilion.com.

Until next time, once the weather settles down the fish should be biting, so take some time to get out and enjoy the great Minnesota outdoors. 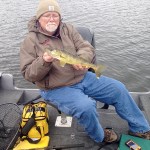 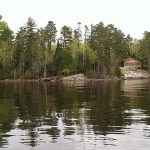 A cabin is nestled amongst the trees on one of the 365 islands on beautiful Lake Vermilion. — Provided 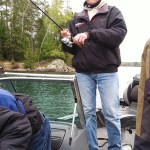 Dylan Herfindahl is in serious concentration mode anticipating the next bite. — Provided 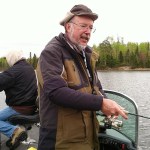