Teaching family to fish can be a fulfilling activity 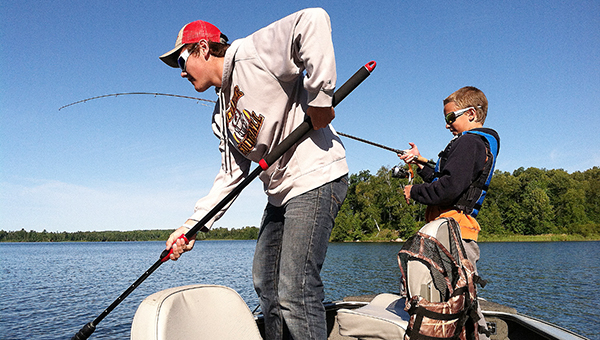 Just this past week, my wife, Jean, and I headed north to our cabin to enjoy a few days relaxing and watching and feeding the birds and critters while spending time in the woods.

I hadn’t planned on being there at that time. But after talking to Jean, she said she took vacation for that week, so we decided to head north for a few days.

On the way up, we received a text from Dylan that Jean replied to while I drove. He asked if he could bring his little step-brother, Caiden Shure, who is 10, because he had seen pictures of our fishing trips and was hoping he could come along. Of course, we told him it was no problem.

We didn’t arrive until late Monday evening and were greeted by few downed trees blocking our way to the cabin. I was able to get close enough so we could carry the necessities to the cabin and get some sleep.

Dylan and Caiden arrived promptly at 9 a.m. the next day, just in time to help me cut up that tree and clear the drive to the cabin. I am definitely going to have to buy a chainsaw!

After we had some lunch, and Dylan gave Caiden a short tour of the cabin — it’s too small for anything but a short tour — we hooked up the boat and headed to our first lake of the day.

The first lake had been good to Dylan and me in the past, but this time it was not to be. I told the boys that we would fish for a little longer and then head to another lake. That other lake was a little more productive but not that great.

You have to understand one thing, Dylan has grown up fishing with grandpa, and I primarily fish northern and bass — catch most of them fishing northern — so he also has grown a fondness for those fish with many teeth. Caiden caught a northern that first day, and just seeing how excited he was made our first day of fishing a success.

After the day of fishing ended, Dylan asked if we could go to Spider Lake the next day, to which I gladly answered, “Yes.” I told him that we would get up at 5 a.m., have one of his grandma’s fantastic breakfasts and head out.

That night after supper, he and Caiden were busy preparing their fishing poles and planning what baits they would use the next day. Oh, the anticipation of the next fishing day is something that makes this such a great sport for kids of all ages — even this kid.

After we enjoyed the aforementioned breakfast, we were off to fish the lake that is special to both Dylan and me.

To tell you what an impact this lake has had on Dylan over the years, when we would pass a certain little bay or point he would tell me, “This is where you caught that big northern,” and later he was quick to point out the spot where I had caught a walleye on one of our visits the previous year.

The amazing thing is that he can remember the spot where he’d caught his first northern. This is just a perfect example of how the sport of fishing can have such a positive effect on a youngster.

Grandma made us sandwiches for shore lunch, which has become sort of a tradition for Dylan and me the past few years. When it’s time for lunch, I will look for one of the open campsites on the lake and pull the boat up there.

There are three such sites on the lake, which requires no more than being the first one there to claim the spot. There is a two-week limit on each campsite, and the rules are simple: clean up after yourself, cut only dead trees for firewood and don’t leave any campfires unattended.

The spot we found to eat our lunch was on a narrow point with water on both sides. There is an outdoor toilet, which seemed to amaze Caiden because he kept saying, “I can’t believe there is just a toilet sitting all by itself out in the woods.” I just smiled and nodded.

I cleaned one of the northerns that we kept while we were there because it had died, and we still had plenty of time to fish.

There is a slot limit on northern on Spider where everything between 24 and 36 inches must be returned to the lake. You can keep one over 36, but Dylan said he wouldn’t do that unless it was big enough to mount.

We caught a lot of fish that day but most were either over 24 inches or too small. We didn’t actually catch very many that were too small, and we kept three in the 22- to 23-inch range. The pike on Spider have usually always run nice and thick, which makes for good fillets and mighty fine eating.

Caiden’s first-time visit to Spider had him talking non-stop the rest of the way home. It had to be a great experience for a 10-year old: catching his biggest northern ever, fishing this beautiful lake, having a shore lunch and even using a toilet that was out in the middle of the woods.

It was fun to watch Dylan mentoring Caiden and doing everything that he could to make sure he was having fun. The look on Caiden’s face when he caught his first northern was priceless.

That day on Spider was a good one, and although the old teacher caught more than his share, I was always happier when one of those boys got a fish.

I was really beat after spending seven hours on the water, and grandma could tell when we got back. Dylan said he wished he could stay another day, but grandma told his dad on the phone that another day would probably have killed grandpa.

Even though I was probably thinking the same thing at the time, I know that I would have welcomed the chance and found a way to survive.

Dylan’s birthday was on Friday, and don’t think he could have gotten a better present than that trip to Spider.

Until next time, take some time to introduce a kid to fishing where they can experience a great sport that lasts a lifetime. 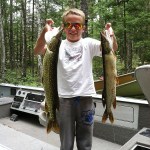 Caiden Shure holds up two of the keeper northern that were caught after a day of fishing on Spider Lake near Grand Rapids. — Dick Herfindahl/Albert Lea Tribune 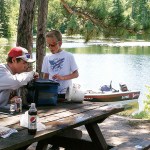 Dylan Herfindahl and his bother Caiden Herfindahl sit at the picnic table on one of the remote national forest campsites that dot the shores of Spider Lake. — Dick Herfindahl/Albert Lea Tribune 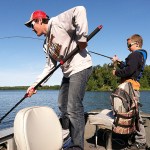