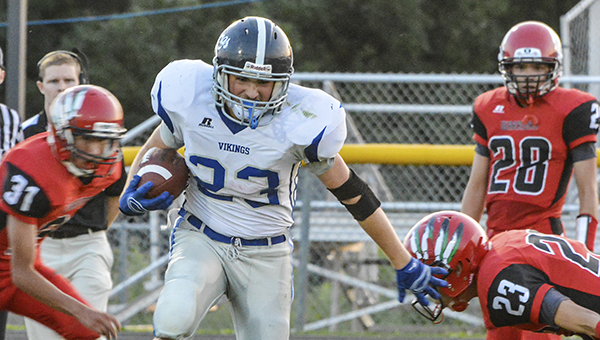 TAMA, Iowa — A stifling defense that held Meskwaki Settlement to its lowest scoring total since 2013 propelled the Northwood-Kensett football team to a win in its season opener.

The Vikings shut out the Warriors 29-0 in the second quarter en route to a 63-12 victory Friday at Meskwaki Settlement in Tama.

“We controlled the line of scrimmage pretty well tonight,” said Vikings coach Dave Capitani. “Our strength is definitely up front. Games are typically won in the trenches on both sides of the ball.”

Northwood-Kensett scored the first points of the game on a 41-yard pass from Josh Einertson to Tom Fick, and the Vikings never trailed.

Einertson — the Tribune’s All-Area football Player of the Year last year as a junior — was 4-of-6 through the air for 95 yards with two touchdowns and an interception.

“He did a good job tonight,” Capitani said. “He made one bad decision but threw the ball and ran the offense well. It’s what we expect.”

Keano Batton led the Vikings’ ground attack with 19 carries for 83 yards and a touchdown. Batton was one of Northwood-Kensett’s four returning backs who rushed for over 300 yards last season.

Last year, the Titans defeated Northwood-Kensett 32-6 at Northwood. Both teams qualified for the state playoffs later that season. 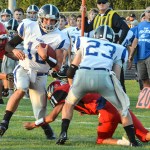 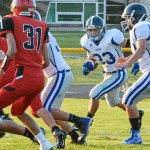 Dawson Van Ryswyk looks for a gap while carrying the ball Friday against Meskwaki Settlement in Tama. — Mike Simmons/Northwood Anchor 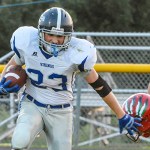