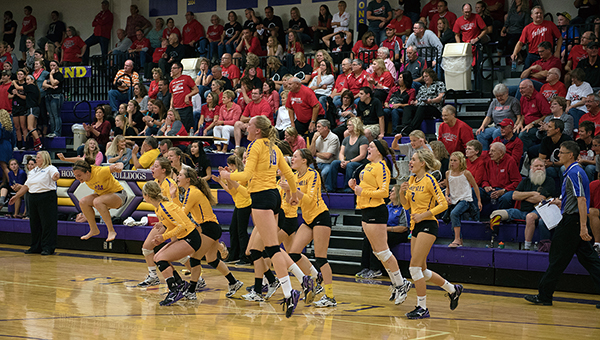 The No. 9 (2A) Lake Mills volleyball team celebrates a win Tuesday over No. 7 (3A) Forest City at Lake Mills. — Lory Groe/For the Albert Lea Tribune

With a win over a ranked opponent in a larger class, the Lake Mills volleyball team clinched the regular-season Top of Iowa Conference West Division title.

“We always feel like we have something to prove when we face bigger schools,” said Bulldogs coach Jim Boehmer. “We are a very proud program, we love our town, and we love our school and that pride is something we talk a lot about.”

The Bulldogs won Game 1 but lost Game 2 after leading 24-21, Boehmer said. In Game 3, neither team led by more than three points, but Forest City went on to win and take a 2-1 lead.

In a must-win situation, Lake Mills more than doubled Forest City’s score in Game 4 and fought back from an 11-6 deficit in Game 5 with a 9-1 run to win the match, Boehmer said.

Madison Shifflett leads Lake Mills on the season with 170 kills, which is second in the Top of Iowa Conference’s West Division. She had 16 kills and four blocks against Forest City.

Kelsea Heintzman posted a team-high 62 assists. Her season total of 610 assists leads the division and is fifth in Class 2A.

Emily Orban was 24 of 24 from the service line and led the Bulldogs with 16 digs.

“I was pleased with everyone’s overall effort tonight,” Boehmer said. “I never doubt our kids’ effort. We have seen so much improvement with so many kids on this team this year, it makes me proud to be a part of this group of girls.”

The win over Forest City was the Bulldogs’ second of the season. Lake Mills swept the Indians 2-0 on Sept. 19 at a tournament at Forest City to snap the Indians’ 14-match winning streak they compiled to start the season.

Next, the Bulldogs will compete at a quad at 6 p.m. next Tuesday at Nashua-Plainfield (17-6 overall). 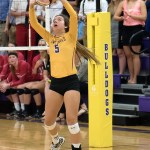 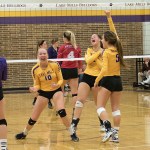 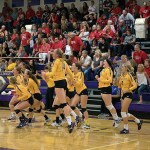 The No. 9 (2A) Lake Mills volleyball team celebrates a win Tuesday over No. 7 (3A) Forest City at Lake Mills. — Lory Groe/For the Albert Lea Tribune