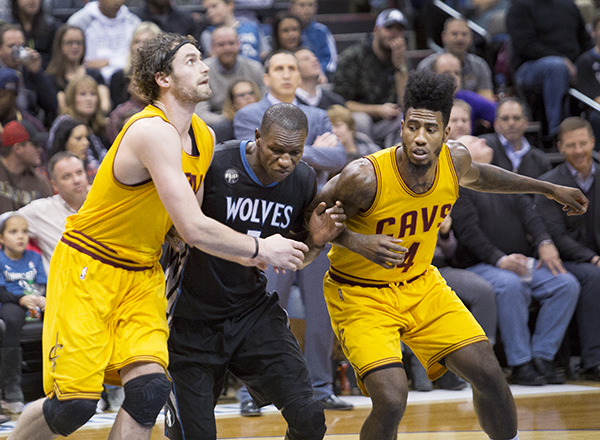 MINNEAPOLIS — Kevin Love was back in Minnesota again, and this time the boos he heard were half-hearted and faint from the Target Center crowd.

Timberwolves fans have moved on, enamored with the player they got in return. And Love is settled in with the Cleveland Cavaliers, happy that he doesn’t have to carry the load all by himself anymore.

J.R. Smith scored a season-high 27 points and Love had 20 points, nine rebounds and four assists to help the Cavaliers to their sixth straight win, 125-99 over the Timberwolves on Friday night.

LeBron James added 13 points, 12 rebounds and eight assists, Iman Shumpert had 23 points and the Cavaliers outscored the Timberwolves 22-5 in transition to win for the 12th time in 14 games. Smith made 5 of 6 3-pointers in just 19 minutes and Cleveland was 13 of 27 from long range to top 120 points for the third straight game.

“It is nice. A lot of different guys can carry the load on this team,” Love said. “It’s not just one or two guys, and that makes for a pretty formidable group.”

Andrew Wiggins scored 35 points, Shabazz Muhammad had 22 and Karl-Anthony Towns added 22 for the Timberwolves, who have lost five in a row and nine of their last 10.

Love spent his first six seasons in Minnesota before he was traded last summer in a package that brought Wiggins to the Wolves. Love’s pouty demeanor over the last half of his final season here didn’t endear him to the fans who once adored him, and they booed him lustily in his return to Target Center last year.

They booed again on Friday, but it seemed like they were doing it more out of obligation rather than genuine distaste.

“This will be a place that will always be one of my homes and a place I hope I’ll always be able to come back to,” Love said.

Love only made 4 of 11 shots, but unlike the undermanned Wolves teams he played for, the Cavaliers don’t need him to carry the scoring load — especially when Smith is shooting the lights out like he has been recently. He scored 49 points and hit 13 3s over his previous two games and kept raining them from deep against the Wolves.

Wiggins averaged 30 points in his two games against the Cavaliers last year and came out firing again on Friday night. But Smith matched him shot for shot, consistently drilling 3s over Wiggins’ outstretched hand. Twenty-one of Smith’s points came in the first half, the same output for Wiggins and Minnesota did not have near the scoring depth to keep pace with Love, James and the rest of the Cavs.

The Wolves led 17-13 early after a flurry from Wiggins, but Cleveland outscored the Wolves 22-10 to finish the first quarter and never looked back.

Kyrie Irving had 13 points in 26 minutes in his eighth game back from a knee injury he suffered in the NBA Finals and the spacing he has created has made all the difference for Smith.

“At the end of the day when I catch the ball, nobody’s coming to help,” Smith said. “Nobody’s coming. It’s just me and my man on an island, so I can pretty much do what I want. But nine times out of 10 the catch and shoot is already open and that’s when I’m at my best.”

Wiggins and Towns — the last two No. 1 overall draft picks and both just 20 years old — topped 20 points in the same game for the fifth time this season. Only Oklahoma City’s Kevin Durant and Russell Westbrook (12) in 2008-09 and Minnesota’s Kevin Garnett and Stephon Marbury (7) in 1996-97 stand as duos 21 years old or younger that have done it more times in a season.

Cavaliers point guard Mo Williams again did not play. His minutes have been drastically reduced since Irving returned from his knee injury, in part because of Irving’s quick return to form and in part because of an injured right thumb.

Cavaliers: Cleveland scored 35 points in the first quarter, its highest-scoring opening period of the season. … Smith moved past Eddie Jones for 20th place on the NBA’s career 3-pointers made list. … The Cavs turned 13 turnovers into 24 points.

Timberwolves: Steve Kaplan, the minority owner of the Memphis Grizzlies who is working with Timberwolves owner Glen Taylor on a succession plan to eventually take over the franchise in a few years, sat next to Taylor and his wife, Becky, courtside. 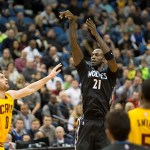 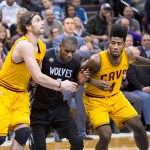 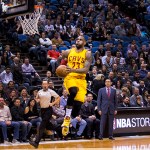 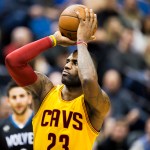