Lake Mills football player honored for life outside the game

LAKE MILLS — Already having earned All-District honors earlier in the offseason, Grant Boehmer learned last week that he had been selected for perhaps even a bigger honor, as his coach, Bill Byrnes, informed Boehmer he had been selected to receive the Brandon Burlsworth Character Award. 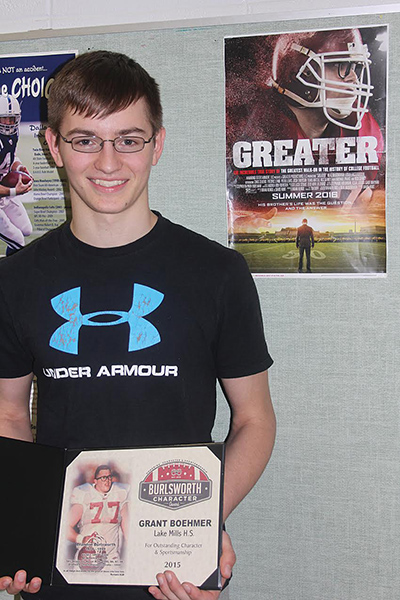 Lake Mills’ Grant Boehmer holds the certificate he received as a recipient of the Brandon Burlsworth Character Award. Boehmer is pictured in front of a promotional poster for “Greater,” a movie depicting Burlsworth’s life that is set to be released this summer. – Terry Gasper/Lake Mills Graphic

“I feel honored to have been selected for this award,” Boehmer said.

Burlsworth was a football player at the University of Arkansas, who started his career as a walk-on and ended up a third-round draft choice of the Indianapolis Colts as an offensive lineman.  After his first year — in large part due to his work ethic and character — Burlsworth won not only a scholarship, but a starting job at right tackle. He was an All-SEC Academic Player during his time playing at Arkansas, and graduated with bachelor’s and master’s degrees before playing his final game in a Razorback uniform.

Burlsworth never played a snap in the NFL, as he lost his life in a car accident just 11 days after he was drafted.

Prior to receiving the award, Boehmer admitted he did not know much of Burlsworth and his story.

“I knew he walked on and died early in life,” he said. “He was supposedly not a very good player at first, but became one through practicing and playing the right way. The award was based on his work ethic and the type of person he was.”

In addition to his work on the field, Burlsworth was known for his values. He was on his way home following a workout to have dinner  with his mother when he was killed.

Despite the premature death, his legacy lives on through programs established, such as Burl’s Kids, a program providing the opportunity for underprivileged kids to attend Arkansas and Colts games; The Eyes of a Champion, which helps families obtain eye care for pre-kindergarten through grade 12 students; and a number of college scholarships and high school awards, including the Character Award.

Byrnes noted the character award used to be limited to Arkansas, but recently opened up to the entire country, and he immediately thought of Boehmer.

“He possesses many of the character traits that fall in line with what Brandon believed in,” Byrnes said. “He was an All-District player for us this year, but more importantly, he was a great teammate, he worked hard on the field, has a strong faith and truly wanted to do what was needed to help the team succeed.”

This summer, Burlsworth’s story will come to the big screen, as the movie “Greater” will be released in theaters.

“Oh, that is cool,” Boehmer said when informed that all Character Award recipients will have their names listed in the movie credits. “I hadn’t heard that. I will have to go check it out.”