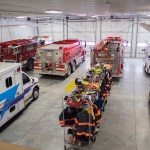 All of the Bricelyn Fire Department’s equipment is housed in its new fire hall. – Colleen Harrison/Albert Lea Tribune 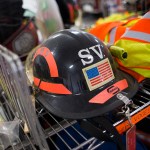 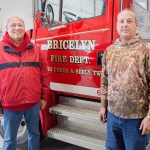 Craig Stallkamp, right, and Dan Klingbeil pose with one of the firetrucks inside of Bricelyn’s new fire hall. Stallkamp is the fire chief and Klingbeil is the mayor of Bricelyn, and is also a retired firefighter. – Colleen Harrison/Albert Lea Tribune 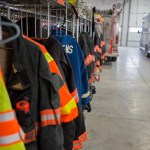 Bricelyn opened a new 5,280-square-foot fire hall on Main Street in June 2014 to house its volunteer fire and ambulance department.

Bricelyn Community Club helped pay for the kitchen, bathroom and meeting room of the facility. Bricelyn Fire Department, Seely and Brush Creek Townships and the city of Bricelyn assisted in paying for the facility.

The fire station, across the street from the old fire hall, has been used beyond its original intent for community events such as movies, a Fourth of July chicken feed, pancake breakfasts, a wedding dance and a groom’s supper.

The hall includes a kitchen, big screen projector and other amenities.

“It’s been used a lot more than we thought it was going to be by the community,” Stallkamp said.

“With the small towns getting smaller all of the time, losing businesses, it’s nice to see some new building going on Main Street. We’re not ready to give up on the town.”

Bricelyn has 18 on its volunteer force that covers both ambulance and fire departments.

Bricelyn Fire Department had been looking at the site for the last 10 years.

Stallkamp said the fire department’s old station across the street hadn’t been updated and wasn’t up to code. New trucks had to be specially built to fit into the facility.

He said the fire department has increased its efficiency and space in its new facility, and vehicles have been able to get out of the building faster.

The department covers a section that is six miles by 12 miles wide that covers the two townships and Bricelyn, as well as six miles in Iowa.

“Without something local, the response time is going to be basically too long to do much good,” Stallkamp said.

He said being a first responder in a small town is unique.

Klingbeil said he is proud of the building.

“I’m very proud of the guys who did the work,” Klingbeil said. “They went out and got the job done.  It’s a nice building.”

Stallkamp hopes the building can draw new volunteers to the force.

“There’s not a lot of younger people from the area anymore,” he said. “If we do get somebody moving in, they can see we have a nice new building,  they can see we’re proud of what we got.”

“It’s beneficial to the community and to the townships that we serve,” Klingbeil said. “It has benefited everybody, I think.”

“It keeps some of our identity.”

Why do you work in Bricelyn over a larger fire department?

Volunteers Bricelyn has on its fire and ambulance service