Where are they now? Catching up with successful athlete brothers from 1970s 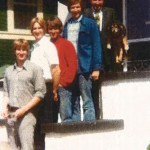 The Wendorff boys, Paul, Brad, Rich and Jim, stand with their father, Harold Wendorff, on their front porch in 1979. – Provided 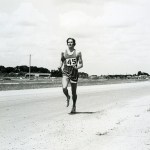 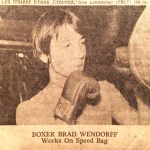 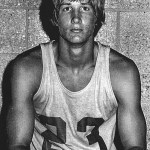 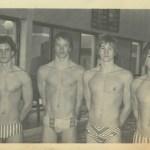 Jim Wendorff was a swimmer who set a variety of school records and Big Nine and region relay records and was a member of the State champion medley relay team. – Provided

In July 1965, a family of nine moved west from Austin to Albert Lea. The Wendorff parents and seven children settled into a large house on Vine Avenue — immediately making it their home.  Unknown to them, they moved into an active neighborhood where big families were the norm; six to 10 children per household was a perfect environment for all-day, into the evening yard and neighborhood games, and the near future of teenage athletics.

The Wendorffs came to Albert Lea for its reputation as a growing and bustling city at the intersection of Interstates 35 and 90. Industry was strong and varied, but Wilson & Co. dominated the economy and the air. Similar to Hormel back in Austin, as father Harold Wendorff said, “The noon whistle and smell of the plant equaled money and plenty of it.”

Harold Wendorff was an entrepreneur businessman, proud Marine veteran of World War II and was active in the Masons, Legion, Veterans of Foreign Wars, Chamber of Commerce, Rotary, amateur baseball and the Twins ticket organization. Mother, Beverely Wendorff, was a registered nurse with a focus on the operating room, while raising a bunch of active children. She was the loving sergeant of the house, and the children all knew it. There were two girls, then four boys, capped off by another girl.

The older girls didn’t have a lot of athletic opportunities back in the ’60s. They were good AAU summer swimmers and enjoyed Dick Clark’s Bandstand in the afternoon. The last child and daughter saw more sports available to her, participating in basketball, volleyball and track.

The four boys were active all day — everyday. They spent time with the vast neighborhood numbers of boys; pick-up games of baseball, basketball, football and kickball went on and on. Many of the teens had and began using barbells and weights; wooden benches sitting in backyards or in garages were not uncommon. The father built an actual baseball bullpen in the backyard, complete with a pitcher’s mound with rubber, an in-ground home plate and chicken-wire backstop with a basketball rim set above. The family spent countless hours back there playing, raking, watering and having a mini Twins environment.

The unusual thing about the neighborhood is that the high school football field (Abbott) was in the neighborhood with practice fields, the stadium, backstops and lots of green grass to play on.

Albert Lea’s Park and Recreation system of summer parks was an additional stimulus as the family gravitated to Morin Park to play organized baseball, box hockey, tether-ball, running games and all the summer fun.

Onto Southwest Junior High School then to the Senior High School the family went, each boy developing their own path. Jumping from sport to sport as the seasons changed, and they excelled.   They said they owe it all to their parents, whose encouragement, never criticizing, solid meals and great sleep grew them well.

What happened to the Wendorff boys after graduation?

Paul Wendorff went on to college to run cross country and indoor and outdoor track. He captained several teams, earned all-conference awards, set school records and in October 2015 was inducted with his teammates into the Minnesota State University, Mankato Athletics Hall of Fame. Distance running came about by surprise, but 60,000 miles later and a body transformation, made it much easier.

Brad Wendorff, after pitching baseball, won the regional Golden Gloves championship at a record young age of 16, when he knocked out a 26-year-old. He then proudly served in the Marine Corps.

Rich Wendorff continued playing basketball at the collegiate level, first at the University of Montana and then at Rochester Community College, where he was All-Conference, All Region XIII, league scoring champion and basketball captain.

He finished his basketball career at Winona State University, where he won the NSIC Scoring Championship in ’78 and ’79, was NSIC All-Conference 1st team, and basketball captain.He became the 11th player in WSU history to score more than 1,000 points — accomplishing this in just two years.

Jim Wendorff continued his swimming career at Wisconsin-Eau Claire and later was active in triathlons and open-water swims.