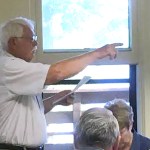 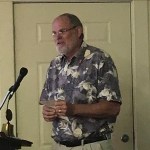 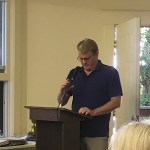 Daybreakers Kiwanis Club President Matt Greibrok shares his thoughts with the group on the history and future of the club at the group’s anniversary celebration. – Provided 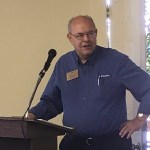 MN-DAK Division 6 Lt. Gov. Jim Bock speaks to the group and recognizes the many efforts of the Daybreakers Kiwanis Club over the past 40 years. – Provided

Albert Lea Daybreakers Kiwanis celebrated its 40th anniversary June 28 at Edgewater Park Cottage in Albert Lea. Current and past members as well as spouses of deceased members all joined in the celebration. Club president Matt Greibrok led the ceremony and member Joel Erickson provided the invocation. MN-DAK Division 6 Lt. Gov. Jim Bock recognized the many efforts of this club over the past 40 years. Charter member, Dick Polley, led the group in sharing stories of the efforts of this club and the fun that has been had over the past 40 years, while doing good in the community of Albert Lea.

According to a press release, Daybreakers Kiwanis is proud of its heritage and was excited to celebrate this momentous occasion.The club looks forward to all the future holds and extends a warm welcome to anyone wanting to learn more about the efforts of this club or becoming a member. Daybreakers Kiwanis meets at 7 a.m. on Fridays in the conference room at Country Inn and Suites in Albert Lea.