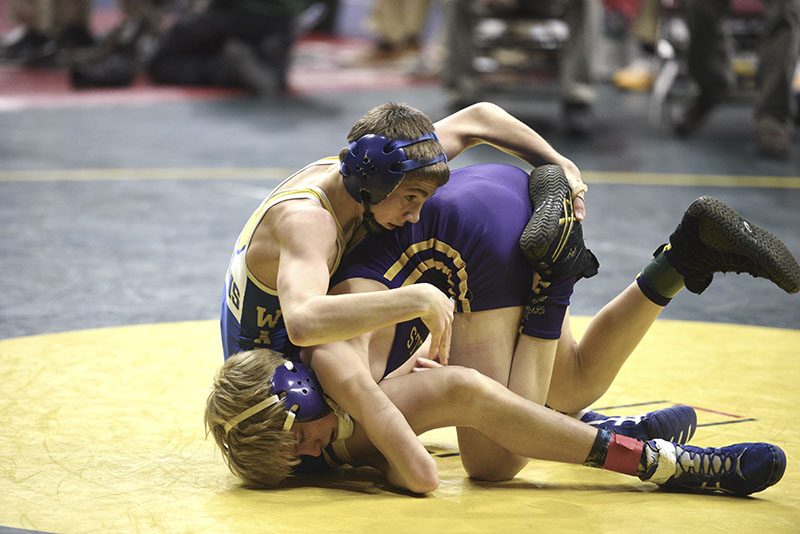 Lake Mills wrestler Caiden Jones takes on Wapello’s Daniel Meeker in the first round of the state wrestling tournament Thursday afternoon in Des Moines. Jones won by a score of 3-2. Lory Groe/for the Albert Lea Tribune

Thursday marked the start of the individual tournament for the Iowa High School state wrestling tournament, and Lake Mills had six individuals in the mix.

Caiden Jones and Slade Sifuentes both won their only match of the day and advanced in the championship bracket.

Michael Olsen, Gabe Irons, Tyler Helgeson and Cael Boehmer all lost their first match of the day, but each rebounded to win the consolation bracket and will wrestle again on Friday.

Jones (46-2) came in as the No. 1 seed in the 106-pound weight class and faced Wapello’s Daniel Meeker in his first match of the day.

Jones jumped out to an early 2-0 lead, but Meeker battled back to take a 3-2 lead late in the match. In the closing seconds, Jones retook the lead and win the match, 4-3, to advance to the next round.

Slade Sifuentes (46-0) took on Manning Kuboushek (36-4), of South Winneshiek in the 195-pound weight class, and Sifuentes didn’t give Kuboushek much of a chance. Sifuentes held a 4-0 lead before pinning Kuboushek at the 3:58 mark of the match.

Tyler Helgeson (43-10) fell behind Don Bosco’s Easton Larson, 4-0 in the first period. Then, Larson extended his lead to 6-1. Larson pinned Helgeson at 3:08 of the match.

The loss sent Helgeson to the consolation bracket where he matched up with Quest Brown of West Valley Central. Both wrestlers wrestled to a stalemate in the first period, and it would stay that way until Helgeson scored three points in the closing seconds of the third period to win the match 3-1 and advance in the consolation bracket.

In the 138-pound matchup, Lake Mills’ Cael Boehmer (34-10) took on West Sioux’s Kory Van Oort (39-5). Van Oort took control early and didn’t let up against Boehmer. He jumped out to a 2-0 lead and didn’t look back, winning 9-0 to advance one step closer to the championship match.

In the consolation bracket, Boehmer faced Gabe Surles of Clarinda Academy. Boehmer took control early and found himself up 6-0 before Surles could get on the board with two points. Boehmer would add another point to take a 7-2 lead into the final period. The two wrestlers would trade points in the third period, and Boehmer kept Surles at bay to win 11-4 and advance to the next round in the consolation bracket.

Michael Olsen (49-5) took on Mediapolis’ Brennan Swafford (45-1) in the first round in the 152-pound weight class. Swafford showed Olsen exactly why he had lost only one match coming into Thursday’s meeting. Swafford went up 2-0, but Olsen showed some life by cutting his lead in half, 2-1. But it was all Swafford after that. He built a 6-1 lead before pinning Olsen at the 2:43 mark of the match.

Coming of his loss to Swafford, Olsen rebounded with a victory over Sebastian Berg via pinfall to advance in the consolation bracket.

Gabe Irons (47-5) took on Daniel Bishop (34-0) of Hinton in the 182-pound bracket. Bishop took an early 2-0 lead in the first period. Irons managed to tie up the match at 2-2 in the second period before Bishop quickly responded to take back the lead. Bishop would extend his lead to 7-2 and would end up winning 8-3.

Irons’ loss set him up with a match against Dante Arzani, of Interstate 35, in the consolation bracket. Arzani took an early 2-0 lead in the first period, but Irons would tie the match just before the buzzer sounded. Both wrestlers didn’t manage a point in the second period, but Irons took control in the opening seconds of the third period to go up 4-2. Irons would hang on to win by that score.

Look to the Tribune on Friday for more updates.