It’s life on the farm for 3 area women 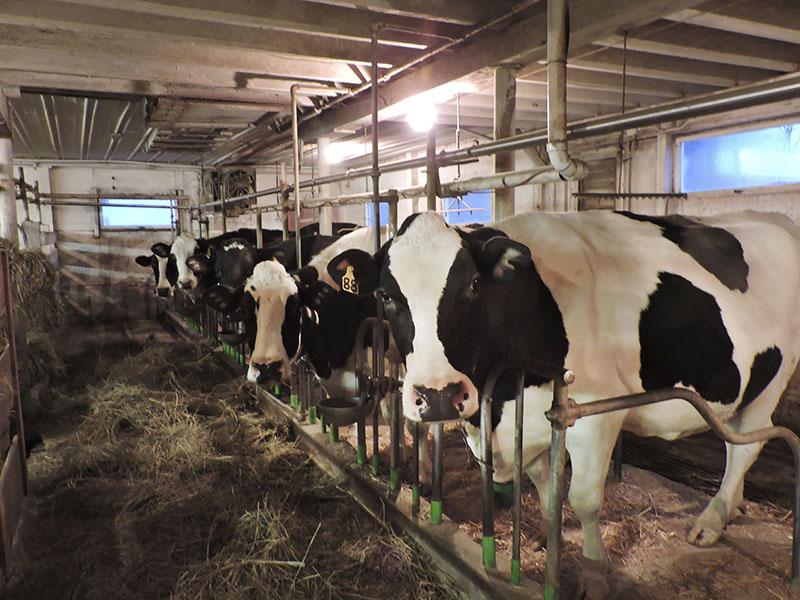 Along with helping with the calves, Ruth Sonnek helps with many of the other farm chores during the planting and harvest seasons. Kelly Wassenberg/Albert Lea Tribune 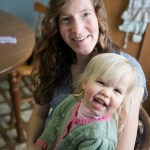 Stacie Madson, pictured with her daughter, Evelyn, lives on a farm in Hartland with her husband. Colleen Harrison/Albert Lea Tribune 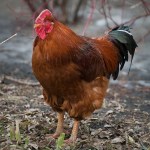 The Madsons have chickens and pigs on their farm in Hartland. Colleen Harrison/Albert Lea Tribune 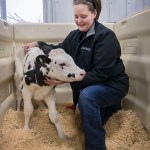 Ann Larson and her husband raise Holstein cows on their farm in Emmons. The calf pictured with Larson was born the same day the photo was taken on Jan. 24. Colleen Harrison/Albert Lea Tribune 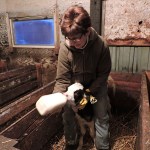 Ruth Sonnek works on the family’s dairy farm on weekends and when her husband is busy in the fields. Kelly Wassenberg/Albert Lea Tribune 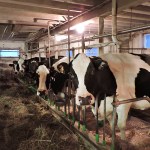 Along with helping with the calves, Ruth Sonnek helps with many of the other farm chores during the planting and harvest seasons. Kelly Wassenberg/Albert Lea Tribune

As the dynamics of farming evolve from generation to generation, so have farm families.

Advances in machinery have made farming more productive, allowing farmers to run larger operations with less help. These advances have made it easier for the wives of men who farm to pursue work elsewhere, yet some have chosen to stay.

Some may tell you it’s because they love the work, despite there undoubtedly being easier pursuits in life. Others may tell you they’re drawn to the tight-knit farming community in which neighbors help neighbors.

At least three women will tell you it’s a little bit of both. Here are their stories.

Stacie Madson, 30, of Hartland grew up on a farm and always knew that is where she wanted to stay. Even after graduating from NRHEG and Mayo School of Health with a histology degree, she never stopped enjoying working on the farm with her husband, Casey, who she married in 2012.

She worked the second shift at Mayo Clinic in Rochester, which allowed her to do morning chores before her commute to Rochester. The couple reevaluated their situation when daughter Evelyn, now 2, came along.

“We thought it would just be better if I was home, if we could make a go of it anyways,” Madson said.

The prospect of giving up her job outside the home was a sacrifice she was willing to make for her family and the farm life she loves, she said.

While motherhood makes it a little bit more of a challenge, Madson still helps out when she can.

The couple farms with Madson’s father and uncle, as well. If her husband is in the fields or helping one of them, Madson picks up some of the extra duties. She helps out in the fields — where they grow soybeans and corn — or helps in the hog barn.

“It’s just the country life that I really enjoy,” she said, thinking back to the farm she lived on as a child.

She grew up helping out with animals, but was happiest when she could finally start using the machinery.

“When I was 12 I was finally tall enough to run the tractor,” she said, noting the first thing her father taught her to do was bail hay, but she couldn’t stop the tractor on her own. “He’d have to jump off the bail rack and run past the bailer to jump on the tractor to stop it.”

Madson said as she grew she would be able to use the machinery on her own, and loved bathing in the serenity of being alone — listening to the radio and taking in the scenery.

“I just fell in love with that right away,” she said.

Madson was due to have a second child in March as of press time. She said she cherishes that her children will be able to have those same experiences and grow up in the same type of environment that she did.

“Being farmers, we work a lot with our families and our neighbors and it’s the community that (they get)to grow up in,” Madson said. “Everybody watches out for everybody, and I think that’s important.”

Ann Larson, 48, of rural Albert Lea is co-owner of Larcrest Holsteins with her husband, Jon.

While Larson grew up in the country, she wasn’t introduced to the farm life until shortly before the couple was married in 1993.

The country life gave her an opportunity to see just how supportive the farming community is of one another, she said, and she became a part of it as she was shown the ropes to the life she was about to embrace.

“They had to teach me everything,” the Glenville native admitted.

The family-run company was established by David and Raymona Larson in 1960, and has grown considerably since the eight original Holsteins their current stock is descended from. The farm consists of 500 acres of land, which produces corn and alfalfa that is used to feed the livestock. There are about 140 milking cows and hundreds of heifers.

Larson’s particular area of focus in the business is the calves.

As part of their business, the couple not only has a milking operation, but is a part of a flushing program that produces embryos implanted in their own stock and sold overseas.

Larson feeds the newborn calves twice daily and makes sure they’re properly taken care of in a heated shed before they are moved to the calving barn, which houses about 70 other calves she also cares for.

She also manages the books for the business, helps with the business’s marketing and registers each of the animals. Needless to say, Larson’s work is a full-time job that reaches far beyond a 9-to-5 schedule. She doesn’t get sick days or a day off unless it’s planned far in advance.

“Sometimes there’s just no choice, you just have to get it done,” Larson said, noting that amount of work does have its benefits. “I have found that sometimes the busier I am, the more organized I am.”

Her work on the farm is done out of desire and not necessity, as Larson noted that her husband would be supportive of her if she wanted to do something else; she just chooses not to.

“I love the animals,” she said. “The thing that I was most surprised when I first came out here was their personalities. Each one has a different personality.”

Even after all these years, the beauty of watching a calf being born has never grown old, Larson said, and she becomes more attached with every generation.

The couple’s dedication to breeding the highest quality Holsteins has paid off. Larcrest Holsteins has produced a number of winning cows over the years, including Crimson, who won the title of 2016 Global Cow of the Year from Holstein International.

Ruth Sonnek, 57, of Easton has been on dairy farms her entire life.

The St. Peter native was the youngest of five children with four older brothers, the oldest of which bought the family farm before Sonnek was old enough to pitch in. As a result, her work with the animals didn’t start until after she married her husband, Russell, who took over his family’s dairy farm.

Sonnek has worked outside the home throughout their marriage — mostly at the Faribault County Farm Service Agency in Blue Earth — but she still helps out with taking care of the calves and other barn duties on weekends and during the spring and fall when her husband and brother-in-law, Terry, are preoccupied with crops they grow.

“You never know how many hours you’re going to work on a farm,” Sonnek said. “You just put in the time you need to put in until the chores are done.”

Despite the amount of work, Sonnek hasn’t had a problem finding balance between her duties on and off the farm.

“They balance each other,” she said. “My work at the office is very much brain power, computers and paperwork, so then being able to come home to the physical, outdoor, fresh air is super balanced.

“I love farming. I’m blessed to be able to do all the things I love. I love cattle. I love my job in the office, which is also working with farmers,” she said. “And I get to do it with the people I love — my family here and then my family with FSA that I’ve worked with for 34 years.”

Working with her family expands beyond the bonds created by blood or marriage, Sonnek said.

“There’s a certain camaraderie amongst farmers,” she said, speaking of her farming community. “Because it’s a specific way of life that a lot of people don’t understand anymore.”

The Sonneks have three adult children — Peter, Kelly and Sarah — and serve as presidents of the Faribault County Dairy Association. In addition, Sonnek serves as president of the area Council of Catholic Women for the Winona Diocese, is a board member for her local American Legion Auxiliary and is captain of an American Cancer Society Relay for Life team, among other community service activities.