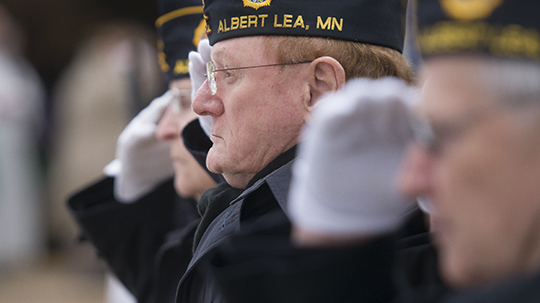 Members of Albert Lea Veterans of Foreign Wars Post 447 and American Legion Post 56 work together to provide an honor guard for every single area veteran's funeral throughout the year. Colleen Harrison/Albert Lea Tribune 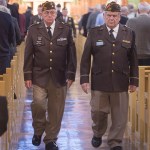 Members of Albert Lea VFW Post 447 escort the colors at the end of a funeral service in January. Colleen Harrison/Albert Lea Tribune 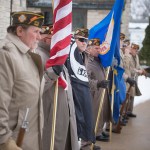 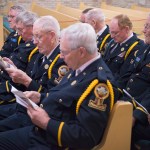 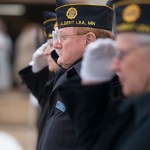 Members of Albert Lea Veterans of Foreign Wars Post 447 and American Legion Post 56 work together to provide an honor guard for every single area veteran’s funeral throughout the year. Colleen Harrison/Albert Lea Tribune

More than respect, obligation or duty; it’s an honor.

Albert Lea Veterans of Foreign Wars Post 447 and Albert Lea American Legion Post 56 have been working together to pay tribute to veterans during funerals, parades and other community events for over 60 years.

The group is referred to as an honor guard during funerals and memorial services, and is a color guard when it’s escorting the flag during such events as the Third of July Parade and area sporting events. The VFW — whose members are those who have served in combat zones — handle the colors while the Legion — whose members served in support but not necessarily in a combat zone — handles the rifles for the three-volley salute.

“The VFW and the Legion, we work together as one,” Donahue said.

Chairman Billy Christianson has been the coordinator of the partnership since 1956, and both Legion and VFW members said he has been an integral part of keeping the tradition going all these years.

Donahue said the honor guard usually serves about 70 to 80 funerals each year, and some members have served over 2,000 funerals during their time with the honor guard. Funeral military honors include the organization members going to the service and giving the veteran his or her final salute, whether it be at the church or at a cemetery. They escort the colors and present a folded flag to the veteran’s next of kin. Taps is played and a three-volley salute is fired, with the firing squad always being to the right of the American flag.

Donahue said each service has a military bearing, and much of that is due to the example Christianson has always set for others. According to Donahue, it has also been a great example of coordination and community through the cooperation of not only the VFW and Legion, but the various pastors and funeral homes as well.

According to Donahue and Goett, a funeral takes on average three to five hours of volunteering. The honor guard has served funerals not only in Albert Lea, but also in Alden, Clarks Grove, parts of Iowa and other rural areas.

There have been times when the volunteers have driven up to 40 miles for funerals, and some services have taken as many as seven hours. The honor guard has also had as many as three funerals in one day to serve, and have split up volunteers when there has been more than one funeral at the same time.

Goett said being a part of the honor guard upholds what he feels are the core values of the organizations’ patriotic brotherhood: country, God and family.

“It’s an honor,” he said. “The act of being in the honor guard has probably been one of the most rewarding things I’ve done with my life.”

Donahue and Goett said they’ve been thanked many times by family and friends of the veterans whose funerals they’ve served, and that they’ve been stopped on the street and thanked for the tribute as well. Both men said that at times they’ve been emotional themselves during a service, especially when it has been for someone they knew, and that the playing of taps is always very meaningful to them.

Both Goett and Donahue said that, for them, paying tribute to veterans is what they’re supposed to do.

‘It’s an honor they have coming,” Donahue said. “Each veteran deserves this honor.”

“I took my oath of being in the military very seriously,” Goett said. “Being a veteran, it’s with you always. It’s an opportunity for me and for us to pay that respect.”