Supporting in times of need 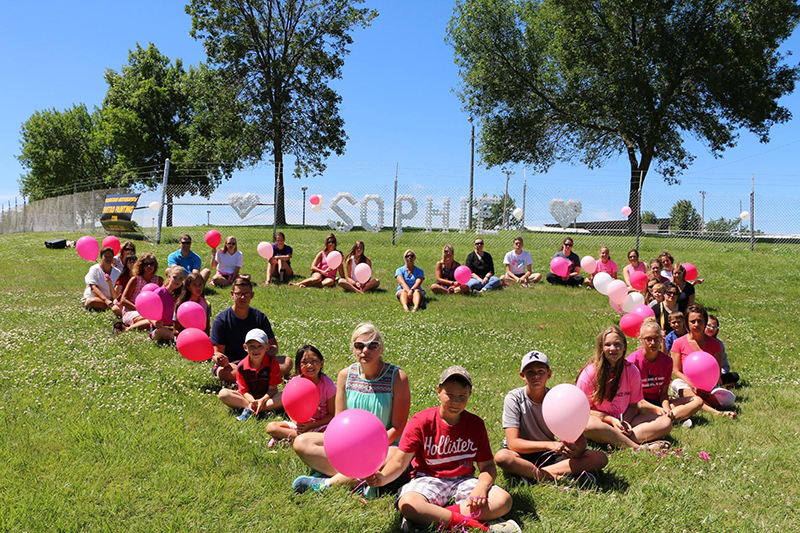 Kiki Christensen's daughter, Kailey Christensen, helped conceive the idea of using cups to spell out Sophie's name in a fence by Albert Lea High School and her friend, Megan Vogt, made sure the task was complete while she attended the funeral service. Many others who partiipated in the project formed a human heart that stayed firmly tethered in place as the procession drove by. - Dan Borland/Albert Lea Tribune 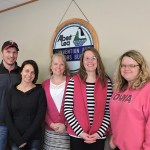 Aaron and Jeanette Phillips, Kiki Christensen, Andrea Harves and Jennifer Hegel were just a few of the area residents who helped line the procession route for the funeral of 8-year-old Sophie Stultz. – Kelly Wassenberg/Albert Lea Tribune 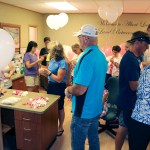 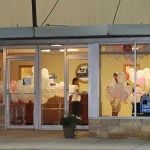 The Albert Lea Convention and Visitor’s Bureau was one of a few locations where balloons were readied the evening prior to Sophie Stultz’s funeral service. Balloons were then moved to more strategic places along the route for easy access the next morning. Dan Borland/Albert Lea Tribune 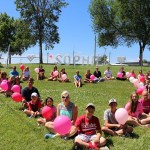 Kiki Christensen’s daughter, Kailey Christensen, helped conceive the idea of using cups to spell out Sophie’s name in a fence by Albert Lea High School and her friend, Megan Vogt, made sure the task was complete while she attended the funeral service. Many others who partiipated in the project formed a human heart that stayed firmly tethered in place as the procession drove by. – Dan Borland/Albert Lea Tribune

Balloons honoring 8-year-old began with an idea; over 100 people volunteered

Like a cracked window or a shattered mirror — the hearts of the Stultz family were irrevocably broken when 8-year-old Sophie Stultz died last July.

In the wake of such overwhelming grief, the family could have drowned in a sea of sorrow. Instead, they have managed to stay afloat due to their strong faith and the overwhelming amount of support shown to them by the community of Albert Lea.

This support has been shown in many ways — kind words, warm embraces and with hundreds of pink balloons.

Like many who heard of the child’s passing — but didn’t know the family personally — Albert Lea resident Jeanette Phillips felt compelled to do something to show the Stultz family her support.

The first thing that came to her mind was a video her mother-in-law had shared with her in which a funeral procession route was lined with balloons.

“I thought, ‘Why can’t Albert Lea come together and do something like this?’” Phillips said.

So she went to work. It was July 5 and she was on a field trip to Valley Fair with her husband and three of her children who were in the marching band. With limited access to Wi-Fi, she sent out a call for volunteers to help with the project from the bus through Facebook Messenger. The response, she said, was instantaneous. Within minutes, she had received over 20 messages, which spiraled into over 100 by the time she was returned home that night.

The flurry of donations of time and materials had Phillips creating a spreadsheet to keep track of much of the information, yet she admits some things were undoubtedly missed. The project branched out far beyond those on her friends list to make it hard to nail down the exact number of volunteers who ended up working to complete the task without fear of leaving someone out.

Her husband, Aaron, speculated the numbers could be anywhere between 100 to 150 people.

Was she surprised with the response?

While there were a few different groups working to fill balloons the night before the funeral, Phillips worked at the Albert Lea Convention and Visitors Bureau, where she met volunteer Dori Etheridge for the first time.

“I saw Sophie almost every day walking past my house or playing in the park,” said Etheridge, one of the Stultz family’s neighbors. “She was such a beautiful little girl filled with so much joy and spunk.”

Etheridge said the balloon event was a way for those feeling helpless and saddened by Sophie’s loss to get together and share something that in a small way would show the Stultz family how much the community was grieving with them.

“Our neighborhood will never be the same,” she said. “It will always be a little emptier and missing one big, bright, beautiful smile.”

Another location that hosted a balloon-filling event was the home of Andrea Harves. While she did not know the family, her husband, Albert Lea police officer Tim Harves, knew Sophie ever so briefly. He was one of the first to respond to the scene of the crash the day Sophie died.

With a group comprised of her husband, parents, sister and her sister’s boyfriend, Harves’s group blew up 800 balloons. With a few extra sets of hands, they lined their assigned route on Lakewood Avenue.

When the work was done and they had a chance to view the route afterwards, Harves said they all began to cry.

“And I haven’t stopped thinking about (the family) since,” Harves said. “You just don’t forget.”

As painful as the memories may be, the staff at Lakeview Elementary School have memories too dear to ever dream of letting go of.

“Sophie was in my class, and she was a beautiful spirit that just lit up the classroom,” said Kiki Christensen, Sophie’s second-grade teacher.

Phillips had personally called her to ask her if she wanted to be a part of the project, to which she said, “Absolutely.”

Christensen hosted a group of about 15 Lakeview teachers and support staff who were assigned to cover Richway Drive. The group did so in advance so they could still attend Sophie’s funeral service.

For Christensen, participating in the project served a dual purpose. While she definitely wanted to support the family and let them know how much Sophie meant to so many people, she also needed a way to focus her energy on something positive.

“When you teach, those kids become yours, and it’s like losing one of your own.”

These individuals represent just a handful of those who worked to make the balloon event a success.

“I’m honored to be a part of the community that they are a part of,” Phillips said of everyone who participated.

Speaking on behalf of her family, Sarah Stultz, Sophie’s mother, said she is grateful for the efforts of Phillips and everyone else who chose to be a part of the project.

“During such an emotionally draining and shocking experience of Sophie’s death, we found comfort in the actions of the community through these balloons,” Stultz said. “It touched our hearts knowing how thoughtful people were to do this and to find out all the work that went into preparing and getting the balloons in place.”

The family had caught glimpses of the balloons on the way to the funeral service and assumed they were there in honor of Sophie. However, the full extent of the effort was not felt until they were riding in the funeral procession.

Stultz’s memory of that day demonstrates the balloon event had its intended effect.

“Thinking back about those balloons brings back all the overwhelming memories from that week,” Stultz said. “We felt and still feel so much love from the community. It has, without a doubt, made our journey easier to bear.”

And she too has a message for all those who participated.

“Thank you,” she said. “In the middle of a heartbreaking experience, it was such a sweet experience to be the recipient of all of this love and caring. It is something we will never forget.”