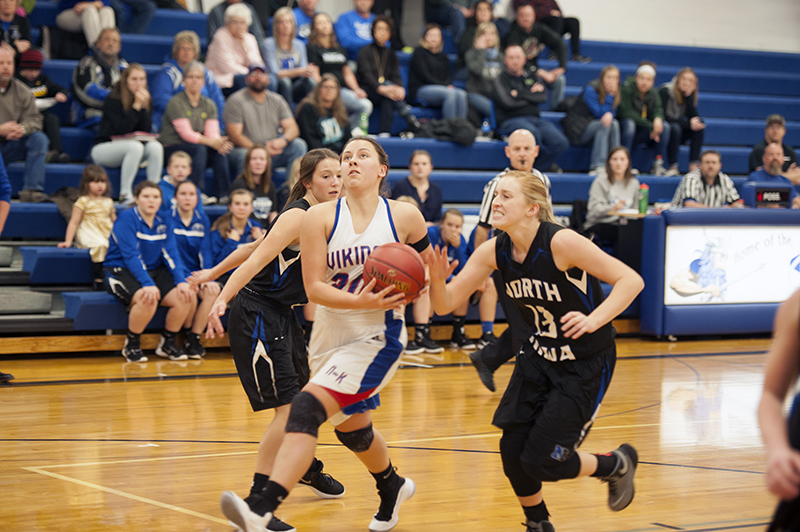 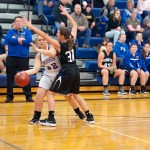 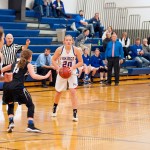 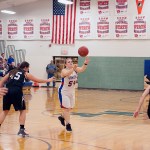 Northwood-Kensett senior Dusti Bratrud passes the ball off to a teammate in the second half of the game against North Iowa. The Vikings would drop the game, 28-38. – Tyler Julson/Albert Lea Tribune 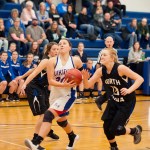 NORTHWOOD — The Northwood-Kensett girls’ basketball team opened its season at home Tuesday night against North Iowa. The Vikings went back and forth with the Bison for most of the first half, but eventually the Bison pulled away, beating the Vikings 28-38.

The second quarter saw much of the same from both teams. However, this time it would be the Vikings committing the turnovers at the end of the half. With under 30 seconds to play in the second quarter, the Vikings led 20-15. An and-one opportunity for the Bison pulled them to within two points. After some miscommunication and a turnover by the VIkings, the Bison would again find an and-one opportunity, tying the game at 20 just before the buzzer.

The Vikings got out to a slow start coming out after the break. The Bison went on a 10-0 run to start the third quarter and would not give up the lead from then on. The Vikings went on a small run of their own to end the quarter, but would need to find more to have any chance of pulling off the comeback.

Heading into the final quarter of play, Northwood Kensett trailed 32-24. The team rallied to cut the lead to just five points, but it would prove to not be enough as Northwood-Kensett fell to North Iowa in its home opener.

The Vikings were led in scoring by junior Laura Hopperstad with seven points. She was followed closely by Einertson, who finished with six points. Julia Quisley, Clara Davidson and Brianna Hepperly each had four points for Northwood-Kensett. Paige Olson had two and Dusti Bratrud finished with one point.

Northwood-Kensett drops to 0-1 on the season and will host North Butler on Tuesday to try and even the team’s record.