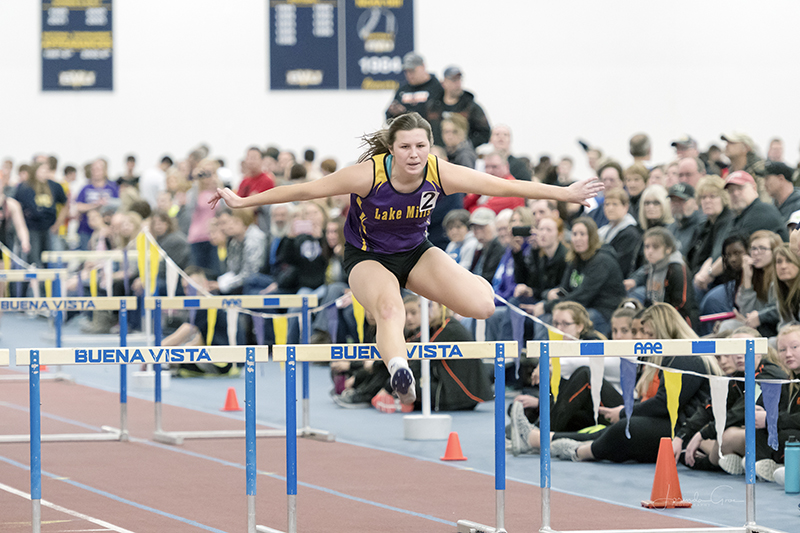 Lake Mills senior Mallory Wilhelm competes in her leg of the shuttle hurdle relay. Wilhelm and her teammates would come in fourth in the event and Wilhelm would go on to finish third in the high jump. - Lory Groe/For Albert Lea Tribune

The Lake Mills boys’ and girls’  track teams traveled to Storm Lake, Iowa, on Saturday for their first meet of the season on the campus of Buena Vista University.

The boys’ team walked away with eight medal-winning events, while the girls’ team took home one medal.

Seniors Alex Albert and Grant Fjelstad and juniors Tommy Kaktis and Cael Boehmer would take first place in the 60-meter shuttle hurdle relay with a time of 36.20. 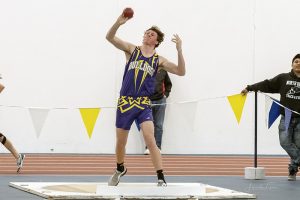 Lake Mills senior Gabe Irons throws the shot put Saturday at the Bulldog’s first meet of the year at Buena Vista University. Irons would take fourth in the event with a throw of 45′ 8”. – Lory Groe/For Albert Lea Tribune

Albert would also win third place in his second hurdle event of the day. He finished with a time of 9.34 in the 60-meter high hurdles.

Sophomore Logan Prescott would win the 60-meter dash, edging out his opponent by just .01 seconds.

Prescott would also finish second in the 200-meter dash with a time of 26.59.

The final first-place finish for the boys’ team was the 4×200-meter relay team of sophomores Garrett Hanna, Bennett Eaton and Blake Storby and freshman Carson Eaton. They won with a time of 1:40.04.

In the 4×400-meter relay the team of Fjelstad, Albert, Kaktis and junior Dylan Renneker came in third place with a time of 3:41.26.

On the girls’ side of the meet, senior Mallory Wilhelm was the sole Bulldog to come away with a medal. She finished in third place in the high jump with a jump of 4’8’’.

The next meet for the boys’ team will be March 29, when they travel to Central Springs High School.

The girls’ will be back in action April 2, when they compete at West Hancock High School.