Top 10 editorials, columns and letters to the editor of 2018 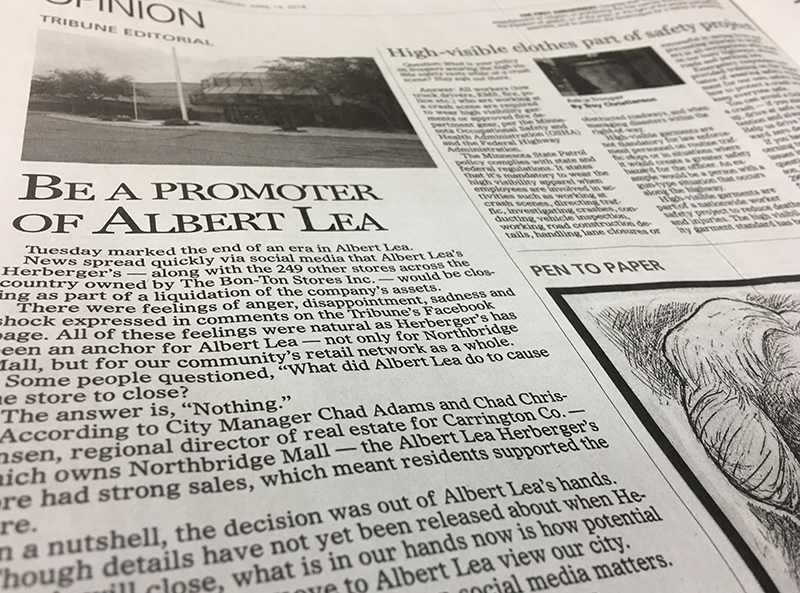 The Tribune's editorial following the announcement that Herberger's would close was the most read piece on the Opinion page in 2018.

Besides the front page of the newspaper, one of the most read sections in the paper each day and online is the opinion page. People enjoy reading others’ opinions, whether in the forms of columns, letters to the editor or editorials.

The Tribune encourages dialogue in the community and welcomes letters via mail to Letters to the Editor, Albert Lea Tribune, 808 W. Front St., Albert Lea, MN 56007, or via email to letters@albertleatribune.com.

Here are the top 10 most read columns, editorials and letters to the editor from 2018 online:

1. Editorial: Be a promoter of Albert Lea

Tuesday marked the end of an era in Albert Lea.

News spread quickly via social media that Albert Lea’s Herberger’s — along with the 249 other stores across the country owned by The Bon-Ton Stores Inc. — would be closing as part of a liquidation of the company’s assets.

There were feelings of anger, disappointment, sadness and shock expressed in comments on the Tribune’s Facebook page. All of these feelings were natural as Herberger’s has been an anchor for Albert Lea — not only for Northbridge Mall, but for our community’s retail network as a whole.

Some people questioned, “What did Albert Lea do to cause the store to close?

The answer is, “Nothing.”

“People deal too much with the negative, with what’s wrong. Why not try and see positive things, to just touch those things and make them bloom”— Nhat Hanh.

Negativity, it’s everywhere. It seems to be a contagious disease spreading around the community these days. I find it hard to go online without the negativity smacking me in the face. When people have a negative experience or encounter, they’re quick to tell anyone who will listen. Imagine if this were true of positive experiences and encounters? Lately, I have seen lots of chatter online about how Albert Lea is a dying town, businesses are leaving, people are leaving — with comments like “will the last one to leave turn the lights off.” It’s enough to dishearten anyone; it’s everywhere, so it must be true, right?

When plans for hospital optimization were announced, I was as upset and frustrated as anyone. I was worried my job might be in jeopardy. I got on board with the Save Our Hospital campaign, hoping they could do something to keep my job here.

I’m having a hard time standing behind the SOH group. It has become evident they are not in support of the employees at the clinic/hospital, rather “sticking it to Mayo.” They seemed so concerned about Mayo employees whose jobs were being transferred but are now willing to jump ship and abandon those left working, so desperately counting on patients to keep coming. I find it shameful that a community group would use their influence to steer patients to seek treatment in a community far from here, essentially taking from this community and giving to another. Their Facebook site has become a place for people complaining about services they have received here and telling people about services they are now getting in other communities.

I have tried to stay neutral in the discussions about Mayo Clinic and the Save Our Hospital initiative.  However, I continue to be shocked at some of the rhetoric. I think it is time to stop attacking our community’s largest employer for everything it does. Some folks seem inclined to take even good news and spin it so that it is unrecognizable. Mayo screwed up last year — badly — by virtue of its poor announcement strategy. However, from my perspective, they have greatly improved since that time. In addition, they are clearly still here, still committed to delivering excellent health care to this community, and via their recent staff announcement, responsive to the concerns expressed by their staff.

5. Letter: “Mayo should cancel its plan”

As someone who has worked at the Albert Lea hospital for 20 years, the events of the last year have been very disheartening. It is a sad situation that Mayo is closing services that our community needs, and even worse when I have seen firsthand that these changes aren’t working. What those of us in the hospital have seen over the last few months came out in the news recently when Mayo announced they weren’t ready to make these harmful changes. No kidding.

6. Column: “Support local family today and in days to come”

Many thoughts have gone through my mind in the last week since I found out that another precious child in our community suffered a terrible tragedy and ultimately passed away while on vacation with his family in Florida.

The news of little 1-year-old Easton LaFrance struck a chord with me as his death came the same week as the 1 1/2-year anniversary since my daughter, Sophie, died in 2016.

7. Letter: “Entire city is being hurt by Mayo’s decision”

To whom it may concern:

Thank you for giving me the opportunity to give to your organization. However, even if I had the funds, after what you are doing to Albert Lea I would never give a dime. Closing my hometown hospital, taking many jobs from my friends, giving many of my friends (my age of 89) not knowing what to do in case of emergency. They cannot drive those miles to Austin. By the way, they don’t drive there for their ice cream cones.

8.Letter: “Turbines will take away a way of life”

Have you heard the big news? Our friends at Invenergy, Freeborn Wind Farm and Xcel are going to put 500-foot tall turbines in Fountain Lake. They will be spaced along the perimeter of the entire lake. These new 500-foot tall turbines are a technological wonder. An expansion area is proposed for East and West Main and the Farmstead property. Many homes somewhere in the Xcel properties will receive the power generated.

This announcement has not happened, yet, but how did you feel reading it? How do you suppose homeowners around Fountain Lake would feel with their full view of the lake being blocked? How would much of Albert Lea feel with the changed ambient noise level of the town 24/7, 365 days a year? How would they feel about the shadows that would loom and flicker over the city, the view that is loved by so many of the lake being gone forever. Homeowners who bought their homes for the view will have that view taken from them with no consent given.

9. Letter: “Stop complaining and get involved”

As you’re out and about in the community, read comments on various news articles or generally interact in public, you hear a few comments about our community being a dying community and chasing off commerce. There is usually one question I ask that gets to the bottom of the matter. “What have you done to improve our community?”

Albert Lea has almost 20,000 residents, the majority of whom are decent, hard-working, friendly  and generally good people. They are our town’s greatest asset. And many, many people have taken up various causes in our community to make it better. They may have taken up a role in Save Our Healthcare or the holiday lights committee. Many are involved in ALEAP to get the tools to start, or build, their business and provide jobs and commerce. Others have run for office or applied to the various committees and commissions in our local government. Many others donate their time and efforts to local causes they believe in, such as the Humane Society or through service organizations like the Rotary Club. The list of causes is endless, and all contribute to a better community.

This is a followup to Catherine Buboltz’s letter on April 26 about Mayo posting “100 open positions” in its nursing department. I’m hearing from nurses that many of the job postings were not comparable to current positions. For example, the posted nursing positions were .6 or .75 FTE (full time equivalent), and they were all rotating shifts (days/nights) or nights only. In addition, Austin nurses were given first pick over Albert Lea nurses.

Some senior nurses have worked day positions for 20-plus years, and some nurses can’t make rotating shifts and reduced hours work for their families.