‘As long as you’re doing something, it helps’ 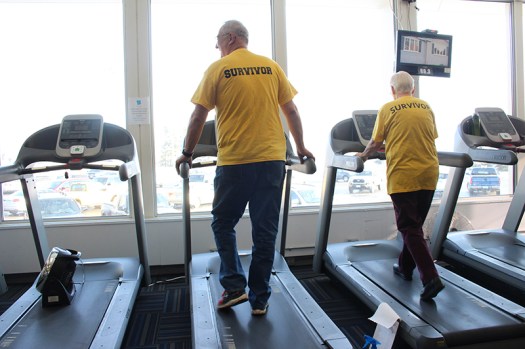 Lynn Berven, left, and Anita Hendrickson walk on the treadmills together. Both also enjoy walking outside in good weather. They are wearing their Livestrong shirts for the photo. - Sarah Kocher/Albert Lea Tribune 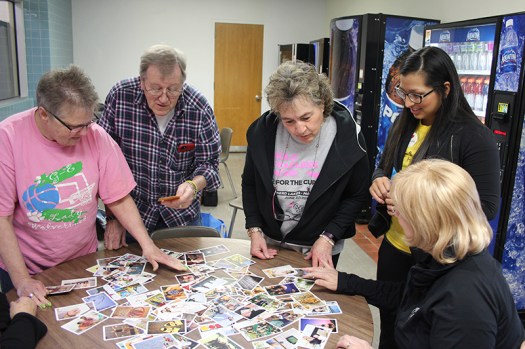 At the beginning of each session, Livestrong participants answer a question about their lives outside of the class. At Tuesday's session, they chose a picture that best represented their careers. - Sarah Kocher/Albert Lea Tribune 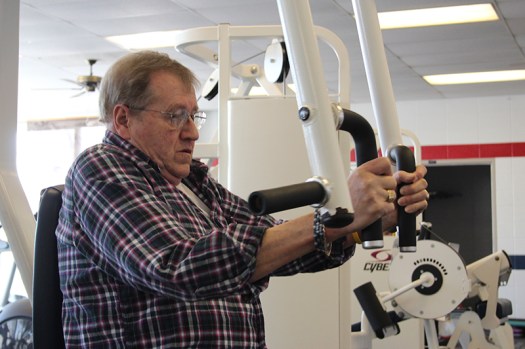 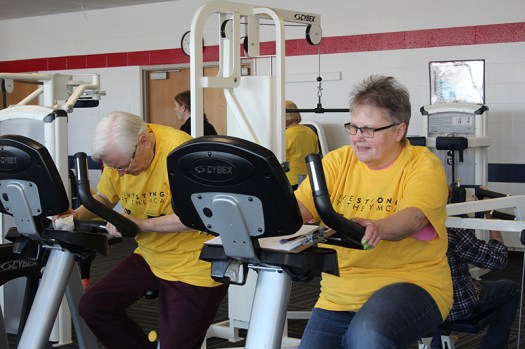 Anita Hendrickson joins a fellow cancer survivor on the bikes Tuesday morning at the Albert Lea Family Y. They are wearing their Livestrong shirts for the photo. - Sarah Kocher/Albert Lea Tribune 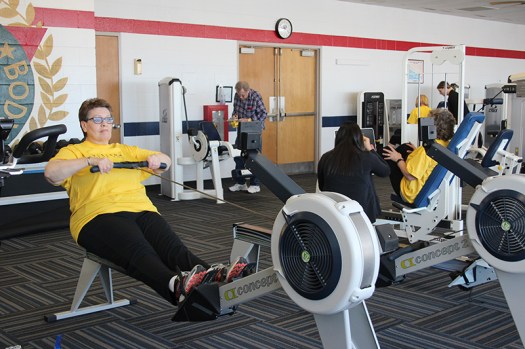 Livestrong participants work out together Tuesday morning. The class is largely freestyle, with participants choosing their own machine and receiving advice or instruction as instructors move through the room. They are wearing their Livestrong shirts for the photo. - Sarah Kocher/Albert Lea Tribune 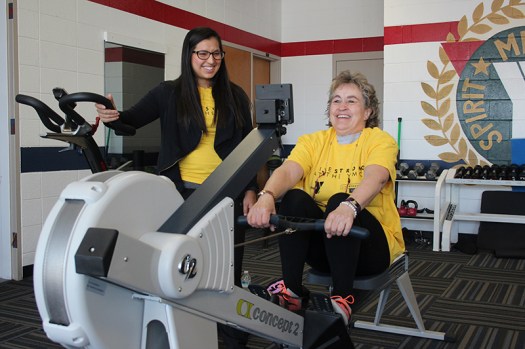 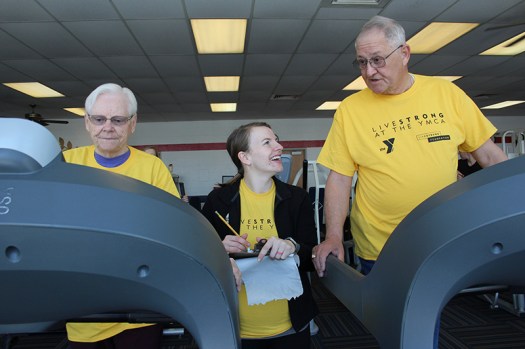 After class, Anita Hendrickson hikes up her pant leg a few inches so the others can see: On the side of her white ankle socks is a soft pink ribbon. She has had these socks ordered for her by a relative since 2007.

On Tuesday, she wore them to work out with six of her Livestrong at the YMCA classmates. The group, led by Alicia Schumaker, Emily Golbuff and Brett Boss, is a 12-week exercise program exclusively for cancer survivors or those currently undergoing treatment and offered at the Albert Lea Family Y twice a year. The class involves cardio work and use of strength-training machines for up to 12 people, a cap intended to allow continued individual attention with those who participate, Schumaker said. The current class has eight participants, who meet from 8:30 to 9:30 a.m. Tuesday and Thursday.

It is a relaxed class structure. Individuals largely direct their own workouts with input and help from instructors, who move around the room from participant to participant, answering questions and demonstrating how to work machines if necessary.

“We kind of give them freedom,” Schumaker said.

Golbuff said the purpose of the class is really to get individuals used to working out again and to empower them to use the machines so they are equipped to continue with a healthy lifestyle after the class is over. Each program participant can attend for free thanks to a grant, Golbuff said, and also gets a free Y membership during the 12 weeks they attend, Schumaker said.

Each participant does assessments at the beginning of the class and then again at the end.

“It’s very exciting just to see people that are able to walk at a faster pace or they’re able to lift more weights or feel more confident with it I would say even, too,” Schumaker said.

But the group develops more than good exercise habits, she said. There is also the camaraderie of shared experience.

“They build a whole new support group within the program,” Schumaker said.

Before they work out together, members of the group gather in the room by the pool to answer a question of the day.

“You get to know people on a more personal basis,” she said.

Both Schumaker and Golbuff used to teach other classes at the Y, but now Livestrong is the only one they lead there. Golbuff said the class has a community aspect about it both she and Schumaker like to be a part of.

“You get to know these people, and you get to celebrate their successes,” Golbuff said.

Boss’s introduction to the class started on the other side of the weight machine. He was a participant of the first class in 2015 following his treatment for Stage 4 Ewing Sarcoma.

It started with hip pain, but he shrugged it off. It took six months for them to figure out Boss, who was healthy with no history of cancer in his family, had bone cancer, he said.

“I was glad to have an answer, but not the one I wanted,” Boss said.

Boss, a member of the Albert Lea Fire Department, said he was active before his diagnosis. He ran half-marathons. But after treatment, it was hard to get back to the gym. He started attending the Livestrong program because he knew the instructors at the time.

“It helped motivate you to get back into it,” he said.

It served as a push, and somewhere to go to get back into the routine.

Now, he has personal experience with what those who attend the class are going through and has the opportunity to motivate other survivors, he said.

“As long as you’re doing something, it helps,” he said.

While Hendrickson said she has not noticed a change in her body, five weeks into the program, current attendee and breast cancer survivor Lynn Berven said he has noticed a change. He has lost over 10 pounds put on over the winter, and his chest feels different.

“I can feel the strength coming back a little bit,” he said of the area under his right arm, where he received surgery to treat his cancer.

Berven heard about the Livestrong program through a cancer support group, which is also where he met Hendrickson. At first, he was not interested, he said, but he spoke to past participants who said it was worthwhile.

“I begged her to go,” Berven said.

Hendrickson, who is in remission from separate battles with breast cancer, Non-Hodgkin Lymphoma and thyroid cancer, agreed to try it.

Berven walks his dog when the weather is nice out, and Hendrickson uses the pedaling machine at Anytime Fitness, she said. But Berven said his doctor told him he needed more activity in the winter, and Hendrickson wanted more strength in her arms and the rest of her body.

The only bad thing about the class, Berven said, is what it takes to be a member.

“When I had my diagnosis, I was pretty down in the dumps,” he said.

Now, he said, he has an obligation as a survivor to tell others diagnosed with cancer that it can — and does — get better. He encouraged cancer survivors to find a support group when they are ready.

“You need other people and you think you’re alone in it,” said breast cancer survivor and Livestrong at the YMCA participant Karen Stoltz.

Stoltz said she felt discouraged when she met some other cancer survivors who did not have a positive outlook about their own survival.

“I don’t want to be one of those people,” she said.

She wants to count the years it has been since she beat cancer. She wants to feel strong again. Fundraising for Relay for Life gave her a purpose again, and the class has given her the encouragement to get back into shape, she said.

“I’m not gonna have cancer define who I am anymore,” she said.