Bicycles — they’re not just a fad 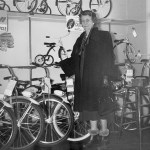 In 1953 during a trip to Albert Lea, Mabel (Stenerson) Jacks visited Kaplan’s Sporting Goods. The store was at 128 E. Main St., the same location as her father’s gun and bicycle shop. 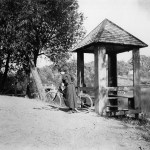 A young woman leaves a shelter along Fountain Lake’s shoreline near Oakwood Park and continues her bicycle ride in 1898. 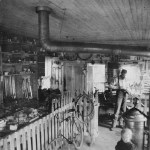 Henry Stenerson is pictured in his Gun & Bicycle Shop on East Main Street. He operated the shop from the early 1890s until 1903 when the family moved to California. 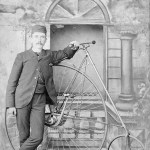 Henry Grinager poses with a high-wheel bicycle in 1882. 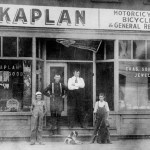 E. L. Kaplan Sporting Goods, 128 E. Main St., was operated by Emil L. Kaplan starting in the early 1910s. His grandson, Robert Kaplan, owned and operated the store for several years until it closed in about 1963. 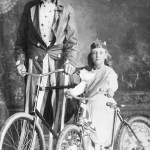 Henry Stenerson and his daughter, Mabel, dressed for an Independence Day parade in the late 1890s.

As the 19th century exited, bicycles were no longer considered just a fad but a form of transportation, recreation and sport. Local businesses were offering bicycles, supplies and repairs.

Henry Stenerson, a machinist, operated a gun and bicycle shop at 128 E. Main St. in Albert Lea. A newspaper advertisement from 1896 indicated Henry was selling new bikes for $28 to $33 and could make repairs in the case of an accident.

As the use of bicycles increased, many more options became available. Wulff Manufacturing Co. handled “The Cycle Whistle,” described as the most perfect bicycle alarm on the market. The company also offered gas lamps and a variety of bicycle supplies. It built new wheels to order and repaired broken frames.

In 1901, the Bee Hive store proudly announced it would soon be equipped with a bicycle delivery cart. The Freeborn County Fair and other community events added bicycle races to their activities. The 1895 county fair featured five bicycle races with distances of a half mile, 1 mile and 2 miles. All the races were governed by the Albert Lea Cycle Club rules. Prizes of cash and merchandise were awarded.