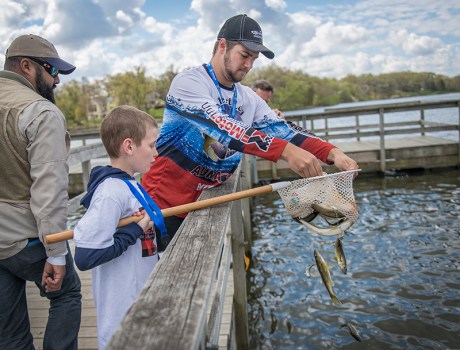 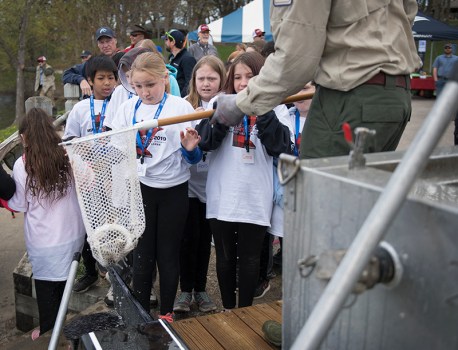 Minnesota Department of Natural Resources personnel load children — some of them reluctant — up with nets of walleye fingerlings to put into Fountain Lake. - Colleen Harrison/Albert Lea Tribune 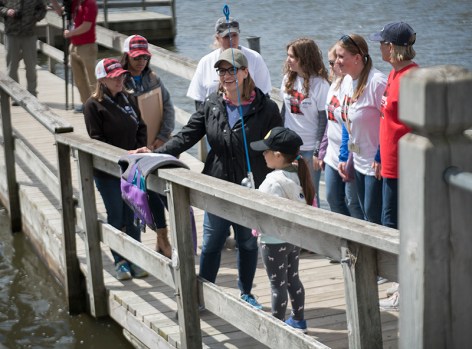 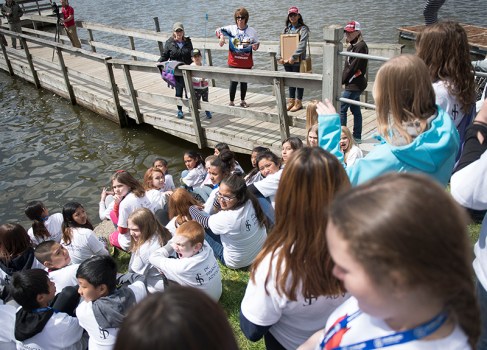 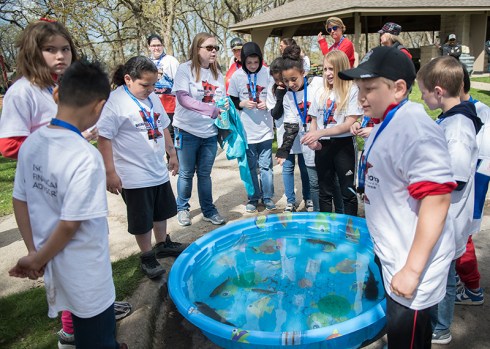 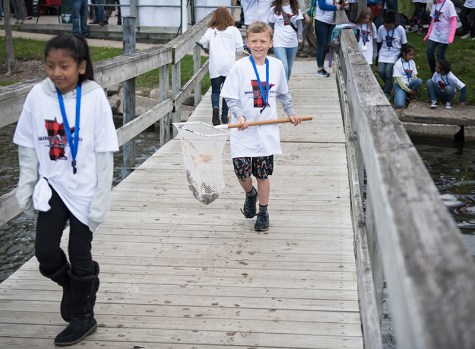 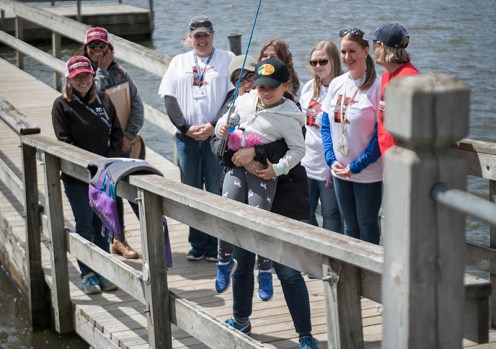 Lt. Gov. Peggy Flanagan had several questions for Halverson Elementary School fifth graders Friday when she joined them for the children’s fishing event at Edgewater Park.

Students had just finished helping the Minnesota Department of Natural Resources stock fingerling walleye into Edgewater Bay, hauling nets of squirming, fish — heavy ones, fifth grader Jiana Gonzales said — from the tank in the parking lot to the fishing pier, where Albert Lea Anglers helped the fifth graders dump the walleye into the water. Students then lined up along the bank as Flanagan stood on the pier in the south end of the park. She started with the most important question first.

How did the fish smell?

Fifth grader Mariam Zeferino Mendez said she enjoyed seeing the live turtles and fish and helping the DNR stock the lake.
“It was a great experience,” she said.

Halverson Elementary School Principal Tonya Franks said she was appreciative of the opportunity to give her school’s students a real-world learning experience.

Normally, the education day associated with the fishing opener allows about 30 students, Franks said. The school worked to have all 56 Halverson fifth graders attend. The major takeaway from the day is a connection to the science standards students are learning in school — and having some fun along the way.

“Today has been a great day so far and I think today is gonna be a once-in-a-lifetime experience for me and everyone else in Halverson,” Halverson fifth grader Levi Griggs said.

Before the students walked down the hill from the pavilion to the water’s edge to help the DNR stock fingerlings, a group of them stood around a yellow circle drawn on the pavement. In the center, a group of small painted turtles began moving outward toward the ring of fifth graders offering them encouragement.

Before he placed his turtle in the starting ring, Griggs gave it a pep talk.

“A lot of people just named the turtles, and that you can believe in all of them even if they don’t win,” Griggs said after the race. “A close second is great.”

Griggs has fished a few times with the Cub Scouts before Friday’s education day.

“Fishing is pretty relaxing for me,” he said.

When students fished Friday, they took part in what Gov. Tim Walz declared Fishing Education Day in the state of Minnesota. Flanagan read the resolution to the fifth graders, which said the Albert Lea fifth grade students, by learning fishing skills, aquatic biology and how they can help keep Minnesota’s waters fishable and swimmable, helped sustain an important Minnesota tradition of fishing, conservation and appreciation of natural resources.

According to the proclamation, teachers, volunteers, partners and sponsors of the Governor’s Fishing Opener “work together to create the next generation of Minnesota conservationists and anglers, not only in the Albert Lea area, but throughout the state.”

According to Ray Ruiz, a fishing and hunting specialist and community liaison for the DNR who helped lead the station on the food chain and life cycle, DNR educators tried to emphasize the narrative of what it takes for a fish to exist in a place, and for an angler to be able to catch it.

There’s another thing the event did, according to Albert Lea Anglers member Taylor Lacher.

“I think it’s a great way to show what Minnesotans are really about,” she said.