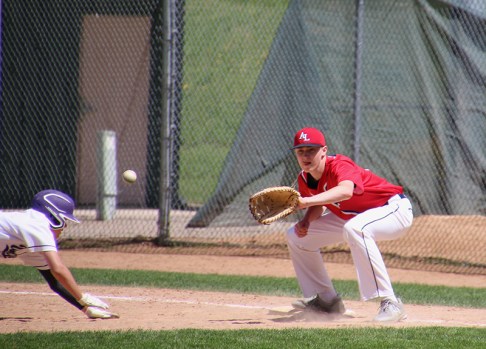 Albert Lea junior Koby Hendrickson lays down the tag to pick off a Red Wing runner Saturday afternoon. Hendrickson started on the mound for the Tigers, allowing zero runs on four hits and four walks, while striking out two in the 2-0 win. - Provided 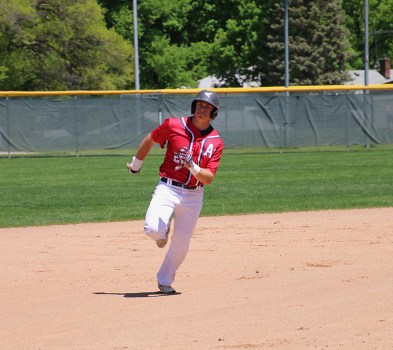 Albert Lea senior Ian Ball rounds third to score on a triple hit by senior Carter Simon. Ball was 1-3 in the victory, scoring one run and walking once. - Provided 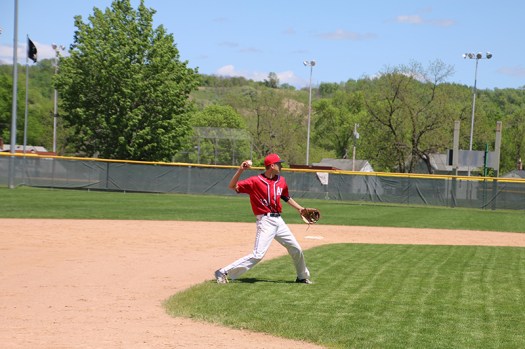 Albert Lea sophomore Jack Jellinger fires a throw to first base for an out Saturday afternoon in Red Wing. - Provided 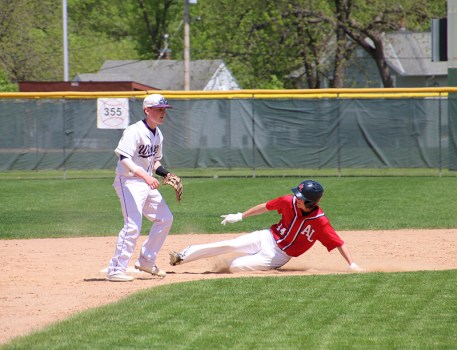 Albert Lea junior Caden Gardner safely steals second base in Saturday’s 2-0 win over Red Wing in the first round of the Section 1AAA playoffs. - Provided

The Albert Lea baseball team came together and played some of its best baseball of the season when it was most needed Saturday afternoon in Red Wing in the first round of the Section 1AAA playoffs.

The Tigers played some gritty baseball as they grinded out two runs and held the Wingers scoreless to come out on top, 2-0.

Starting on the mound for Albert Lea was junior Koby Hendrickson, who had a stellar outing — pitching five full innings and allowing zero runs on four hits and four walks. Hendrickson also struck out two in the outing. Senior Brock Hammer came in for the save over the final two innings of play. Hammer also allowed zero runs on no hits and struck out one.

Five different players notched hits for the Tigers. Seniors Hammer, Carter Simon, Ian Ball and Parker Andersen and sophomore Jack Jellinger each recorded one hit. Simon knocked in one of the runs with an RBI triple and scored a run himself. Jellinger hit a double for the only other mutli-base hit of the game.

“The game was amazing to be a part of today,” said head coach Sean Gaston. “This is the type of game the boys have always been capable of playing and it was exciting to watch. Koby and Brock were awesome. Koby just competed his butt off and willed us through five innings, until Brock slammed the door.

“Our defense was huge today from the great play of Jellinger at third, Jake (Ball) and Carter rolling a huge double play, our outfield making huge plays and solid work behind the plate by Cody (Yokiel). We played one great day of baseball where we trusted and played for the guy beside us. We need to do that for three more days.”

The Tigers move on to the second round Tuesday night when they will meet the Winhawks of Winona on the road. The Tigers lost 2-0 to the Wingers in their only other matchup this season.