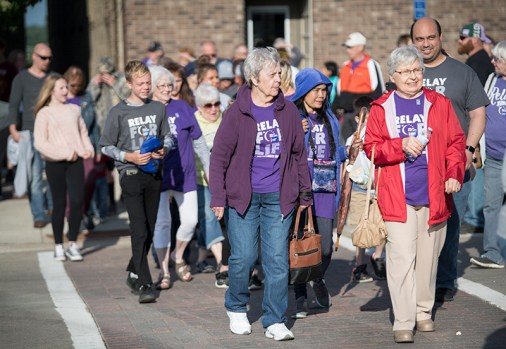 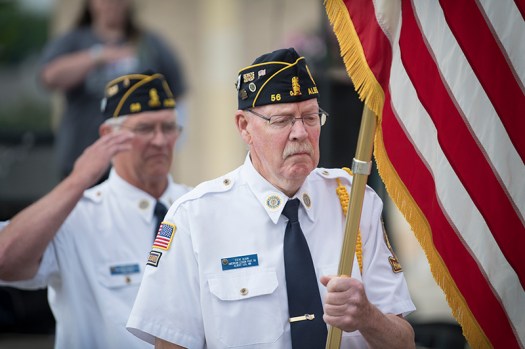 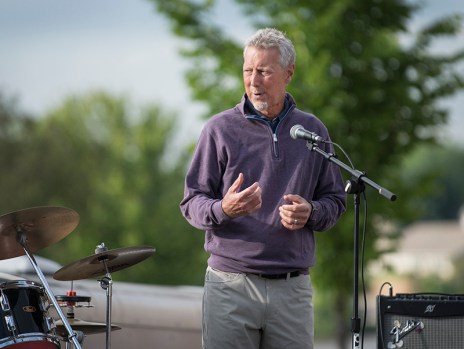 Honorary survivor Doug Peterson speaks during the opening ceremony of the Freeborn County Relay for Life. Peterson is in remission after being diagnosed with advanced prostate cancer in 2017. - Colleen Harrison/Albert Lea Tribune 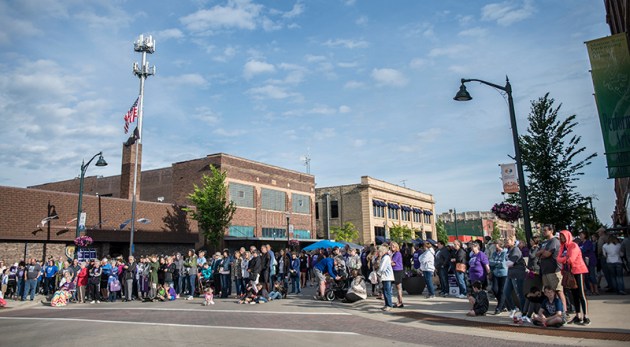 Out of the mass of heterogeneous shirts came a trickle of purple that transformed quickly into a stream. Together, walking down North Broadway Avenue Friday afternoon, the group was united by one label: survivors.

This was a large part of the goal for this year, she said. There was the $45,000 mark set for fundraising, too, but more so, Helmers Nelson said the biggest thing was making the relay a community event.

Seltun lost an eye to melanoma in 2009. When the cancer was discovered, his eye was removed almost immediately.

“Like, ‘what are you doing tomorrow?’” Mary Seltun said.

“The next morning,” he said.

Larry and Mary Seltun have attended Relay for Life for at least 10 years. Their son, unable to attend the event due to prior plans, also battled cancer — both testicular and thyroid.

“It’s always a good night to be with friends and family,” Mary Seltun said.

Relay for Life committee member and oncology nurse Kellie Peterson said she sees firsthand what the American Cancer Society does, not only with education and research but also in helping those battling cancer, she said. At the event, she can reconnect with former patients.

She said she hopes the event will grow in its new venue.

The sidewalks were dotted with luminaries along part of the walking route. Live music, karaoke and food vendors were also present.

In addition to leading the survivors lap, lawyer and honorary survivor Doug Peterson encouraged fellow cancer survivors to accept their diagnoses and then do something about it.

Peterson was diagnosed in 2017 after an X-ray for a back problem came back with a telling spot on it. One test led to another until within a week to 10 days, he was diagnosed.

He fought his advanced prostate cancer, which he said is now undetectable on scans after chemotherapy treatment and medication.

“I decided that … I wasn’t really satisfied,” Peterson said. “I had to do more.”

So he started meditating. He prays and reads spiritual books. He exercises daily. He eats a plant-based diet, with occasional wild-caught fish but no dairy and no other meat.

He encouraged survivors to look beyond one path for dealing with cancer.

“Don’t just rely on the medical response,” he said. “Do it all. Take care of yourself.”

Part of that is thinking positively, as Peterson said a positive mindset is so important.

According to cancer survivor Joy Bryson, so is finding a cure.

Bryson has attended Relay for Life since she was diagnosed with Stage 3 breast cancer four years ago, she said. She has been cancer free for almost that amount of time.

She said Relay for Life raises awareness not just for breast cancer, but also for the other cancers people survive. No matter where it is held, she said she hopes the event continues.