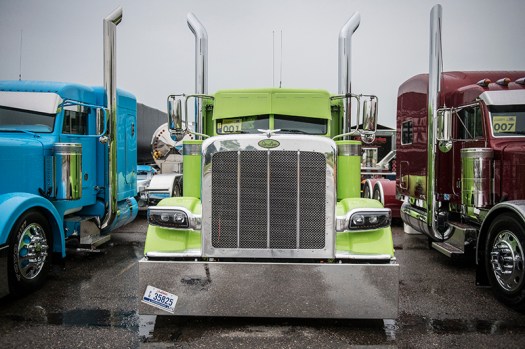 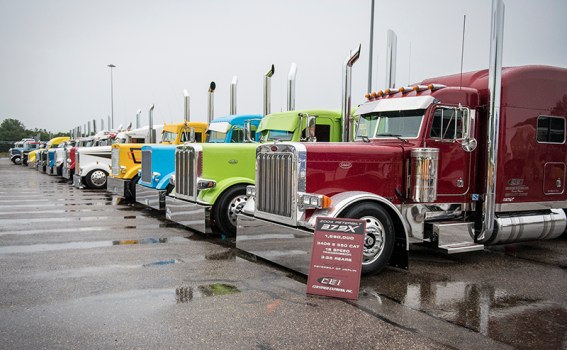 According to a press release, the SuperRigs competition is “the premier truck beauty contest for actively working trucks.” - Colleen Harrison/Albert Lea Tribune 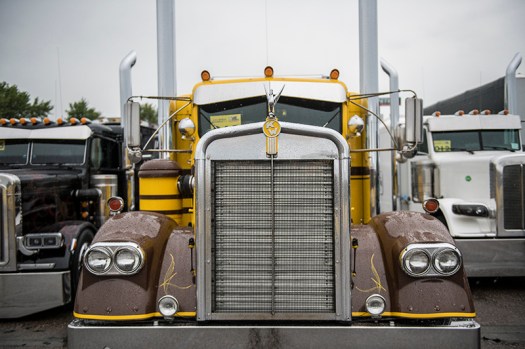 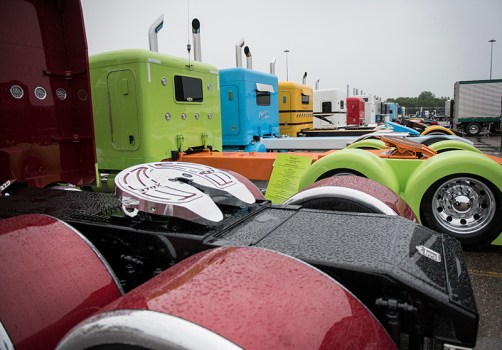 According to a press release, the SuperRigs competition is “the premier truck beauty contest for actively working trucks.” - Colleen Harrison/Albert Lea Tribune

Owners of big rigs vie for a chance at $25K in cash, prizes

The highly anticipated Shell Rotella SuperRigs event got off to a loaded start Thursday morning at Trail’s Travel Center.

The owners of semi trucks of all different shapes, sizes, makes, models and colors lined the parking lot, waiting to have their rigs judged for a chance to win $25,000-worth of cash and prizes.

The fun started at 7 a.m. Thursday with a DJ playing music throughout the day, while the trucks awaited their turn to be judged. Truck judging took place all day and concluded at 5 p.m. Some trucks were scheduled to depart Trail’s in a convoy and make an appearance at Thursday’s on Fountain; however, adverse weather kept them from making the trip.

While the event didn’t officially start until Thursday morning, competitors have been camping out at the site for most of the week and more will pull in through Saturday.

“It’s been a very strong turnout,” said Shell Rotella’s North American Brand Manager Annie Peter. “We’ve had trucks show up on Tuesday and Wednesday, and people have been saying it’s the most trucks that have shown up on those two days in a long time. The expectation is the turnout will be very strong.”

Hundreds of trucks from all over the country enter the event each year. However, for one first-time competitor, the trip was not too far. Matt Cichon is an Albert Lea resident and was overjoyed when he heard the SuperRigs event was coming to town.

“I got excited,” Cichon said. “I asked my employer to put the truck I drive for them in it right away.”

Cichon said he started getting the truck ready for the competition about two weeks ago and was finally able to put the finishing touches on it when he arrived in the parking lot. Meeting new people and getting to know the ins and outs of showing from the other competitors was the best part, according to Cichon. He plans to keep showing after the event as well, taking the truck to the Big Iron Classic on Sept. 6 and 7 in Kasson.

While Cichon is new to showing, some competitors have been in the game for many years. Tod Job has been showing his truck for 24 years. Job said he got started because it was just something to do and he has loved doing it ever since. He said he used to participate in 10 to 12 shows every year, but has recently trimmed down his total to three each year. All the upkeep is a challenge, according to Job, but it’s all worth it when he gets to see all the friends he has made over the years.

Truck judging continues into Friday with a best lights contest scheduled to start at 8 p.m. Casi Joy will perform a show at 8:45 p.m., and fireworks will start at 10 p.m. Entry to the event and all the festivities inside are free to the public.

Awards will be given out during a ceremony at 2:30 p.m. Saturday. Categories include Best of Show, Tractor/Trailer, Classic, Best Chrome, Best Interior and more. Twelve trucks will also be selected to be featured in the 2020 Shell Rotella SuperRigs calendar.

Although winning cash and prizes is a big perk for the contestants, many agreed coming to the event was about much more than the money.

“It’s about the friendships,” said competitor Barry Kasdorf. “Basically, after you’ve done it for a year or two, you start saying ‘Oh yeah, I remember seeing you at this show’ and it becomes like a reunion. It becomes not just about showing anymore, but who all is going to show up.”