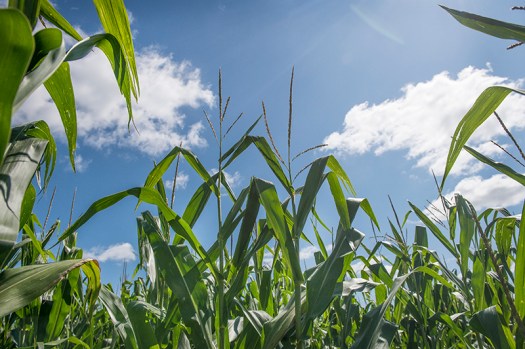 A wet spring and summer along with bouts of strong wind storms have thrown a wrench in some area farmers' schedules. - Colleen Harrison/Albert Lea Tribune 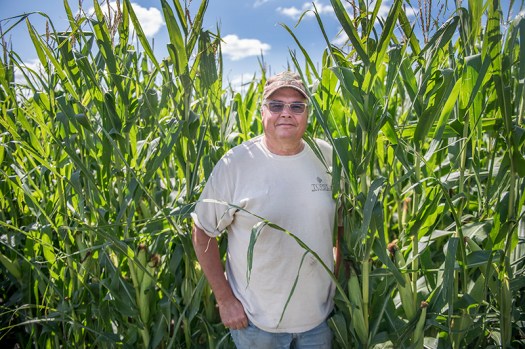 Brad Nelson, who farms between Albert Lea and Clarks Grove, stands in one of his corn fields Thursday. - Colleen Harrison/Albert Lea Tribune 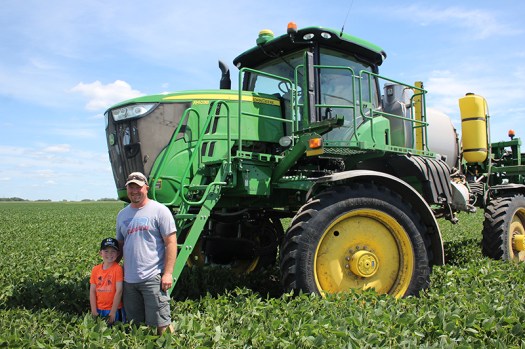 Joey Greibrok and his 6-year-old son, Cullen, were out in the field Friday spraying soybeans. Greibrok said the soybean crop does not look great right now, but that farmers in the Lyle area are expecting a better-than-average yield for their corn. - Sarah Kocher/Albert Lea Tribune 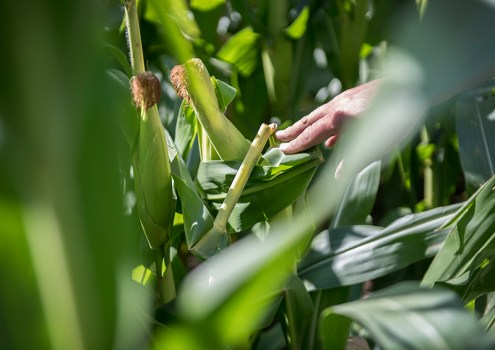 Brad Nelson points to one of his corn plants that was damaged by strong winds, leading to green-snap — or breaking at the stalk. - Colleen Harrison/Albert Lea Tribune 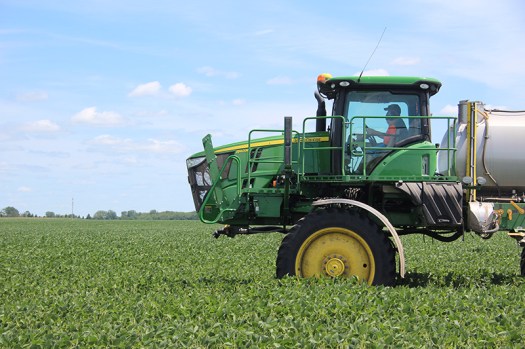 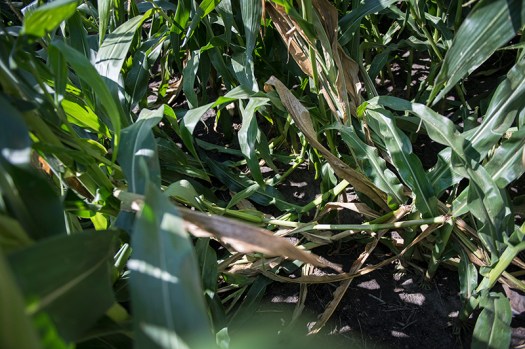 Though in some varieties his loss was minimal, Brad Nelson estimated the high winds and storms that hit the area took out over 40% of some varieties of corn. - Colleen Harrison/Albert Lea Tribune

An early frost could squeeze farmers on both ends of the summer after a wet spring has many of them running a few weeks behind the intended schedule.

David and Diane Schewe, who grow corn and soybeans about three miles east of Hayward, said they were delayed two to three weeks due to a wet spring but were fortunate enough to plant all their crops, Diane Schewe said.

Brad Nelson, who farms between Albert Lea and Clarks Grove, planted relatively on time and close to full capacity, though two to three acres were too wet to work with.

“This past week or 10 days has been the first time the fields have really dried out this year,” Nelson said Thursday.

Joey Greibrok, an Oakland-based farmer who raises corn and soybeans in both Freeborn and Mower counties, also left some land sitting, unplanted, because of the moisture.

But the distance between Nelson and Greibrok is enough space for a change in corn production outlook. Though in some varieties his loss was minimal, Nelson estimated the high winds and storms that hit the area took out over 40% of some varieties of corn. They green-snapped — broke at the stalk.

This is why he plants a mix of varieties.

“Having different varieties, different companies spreads out your risk of different weather events, different pests — stuff like that,” Nelson said.

He expects no better than an average corn crop this year.

But closer to Lyle, where Greibrok was out in the field Friday with his son, Cullen, farmers are expecting more for their corn.

“The corn looks like it could be the best, or above average for sure. … You probably noticed all the airplanes and helicopters flying around all over. People are spraying their corn for bugs and diseases just because the corn markets, the price of corn is better today than it’s been in the last few years just because of the late planting across the whole country, so we’re optimistic that the price is going to keep going up and we can cash in on that. So, we’re spending a little extra money to hopefully increase our yield a little bit.”

Greibrok said his fields were in a sweet spot left largely undamaged by the weather that hit those not much further north and west.

From this point, farmers need 70s and 80s weather, David Schewe said, and about one bout of rain a week, Nelson and Greibrok said.

“For the most part I’m optimistic on the way the crop looks,” Greibrok said. “It just needs time to finish.”

A frost-free start to October would be ideal, too, Schewe said — though unrealistic for the area.

Schewe’s normal soybean harvest is the first week of October.

“I’m thinking we’re probably going to be quite a bit later than that,” he said.

He said a killing frost would be devastating.

“We’d have such immature plants, you know, both the corn and the soybeans that our yield and production would be very, very low,” Schewe said.

But weather is not the only factor in this year’s growing season. Both Schewe and Greibrok are thinking of the trade war.

In general, farmers are happy President Donald Trump is doing something to even out trade between the U.S. and China, a trade relationship in which China can typically manipulate the market, Greibrok said. But the trade war is dragging out longer than he expected.

“I guess we’ll just kind of have to wait and see,” Schewe said.