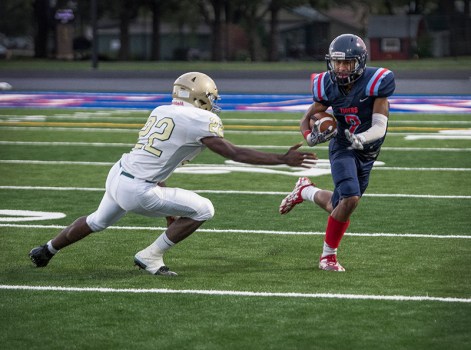 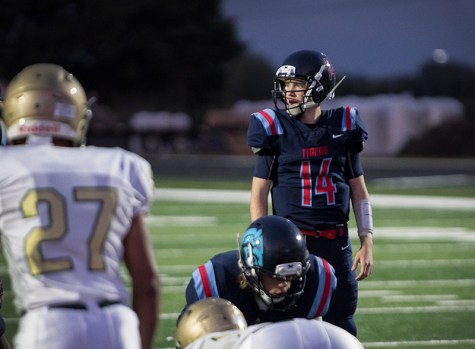 Tigers quarterback Logan Howe looks to the sideline before running a play during the first half of Albert Lea's 49-20 loss to Rochester Mayo on Friday. - Colleen Harrison/Albert Lea Tribune 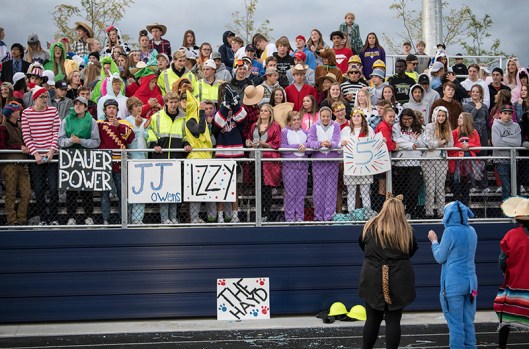 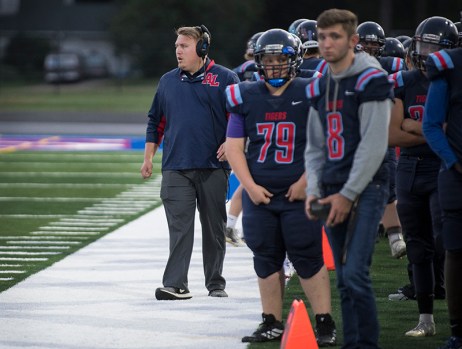 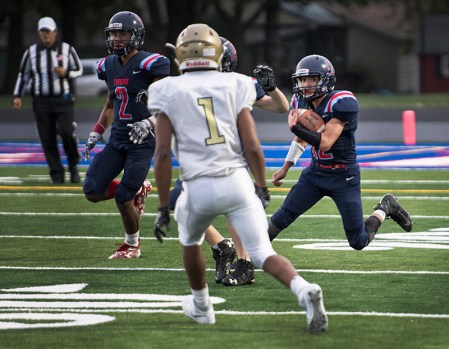 Tucker Eriksmoen of the Tigers carries a return during Friday's game against the Spartans at Hammer Complex in Albert Lea. - Colleen Harrison/Albert Lea Tribune

The Spartans spoiled the grand opening of the new field, as the Tigers failed to gain any momentum offensively. The Spartans took a commanding lead in the first half and never looked back, beating the Tigers 49-20.

The Tigers kicked off to start the game and the Spartans wasted little time, scoring on a six-yard pass less than two minutes into the game. Rochester senior quarterback Cade Sheehan connected with senior Ethan Loehrer for the score.

Albert Lea’s offense got off to a rocky start by turning the ball over on its first offensive possession. Senior quarterback Logan Howe escaped a sack but was quickly pressured and threw a ball into tight coverage.

Starting at the Tigers’ 31-yard line, the Spartans scored to take a 14-0 lead. The score came on a 12-yard pass from Sheehan to sophomore Cayden Holcomb.

The Tigers fared slightly better on their second drive, however, picking up a first down before being forced to punt.

Albert Lea head coach Corey Black talked about the explosiveness of the Mayo offense before the game and it was showcased Friday night. Sheehan connected on a 55-yard touchdown on the next Mayo drive, going ahead of Albert Lea 21-0 with under two minutes left in the first quarter.

After a punt to start the second quarter, the Tigers were given a breath of life when senior J.J. Mucha-Owens intercepted a pass and returned it 74 yards, putting the Tigers three yards away from scoring. Mucha-Owens put the ball in the endzone three plays later on a one-yard rush up the middle. A blocked PAT cut the Spartans’ lead to 21-6.

Albert Lea nearly caught another huge break on the ensuing kickoff when Mayo fumbled the ball, but ended up falling back on top of it.

The Tigers forced a punt and Mucha-Owens once again put the team in good position, returning the punt into Spartan territory. The Tigers were unable to capitalize, however, punting after a four-and-out.

Mayo marched down the field on the next drive and stifled any momentum that had swung in Albert Lea’s favor. Sheehan connected for his fourth touchdown of the night, this time to Loehrer for his third score.

Albert Lea hoped to end the quarter with as little damage as possible, but Mayo was not done quite yet. Sheehan connected on another 55-yard touchdown pass with 19 seconds left on the clock.

The Tigers went to the halftime break trailing the Spartans 35-6.

The woes continued into the second half for Albert Lea. After an Albert Lea punt to open the half, Mayo took its opening play from scrimmage for a 57-yard rushing touchdown.

The Tigers got another boost of energy on the next drive when Mucha-Owens rushed for a 62-yard touchdown to make the score 42-13 after a successful PAT by senior Izzy Cabezas.

The Spartans took the ball back and scored once again, this time on a 22-yard pass.

Albert Lea ended the third quarter knocking on the door of the goalline, and Mucha-Owens punched it in on the first play of the fourth. Another made PAT from Cabezas made the score 49-20 with 11:56 left in the game.

As the clock continued to run through the fourth quarter, the Tigers failed to find the endzone again.

Mucha-Owens and Howe compiled for nearly all the Tigers’ offense on the ground. Black talked about what it was that allowed them to find the open field.

“It was us getting our assignments correct up front and making sure we were winning at the point of attack,” Black said. “We made little adjustments schematically to be able to get better matchups on the interior and not give their linebackers such an easy run at our running backs.”

He said for the first time tonight, they started to get pushed back a little bit at the line of scrimmage and once they figured that out, they were able to create a little more room.

The Tigers defense showed signs of being able to penetrate the line and cause chaos in the backfield. The defensive line made a handful of plays resulting in negative yards for the Spartans.

“Our defense is great when we’re in the right position and make some plays,” Black said. “Tonight we just didn’t really tackle very well and let them slip a tackle and pick up another five or six yards. What we really need to do is start focusing on the little things and our techniques to make sure that we are as efficient as possible when we’re on defense.”

The Tigers fall to 1-2 on the season and will play again Friday when they host the Falcons of Faribault.