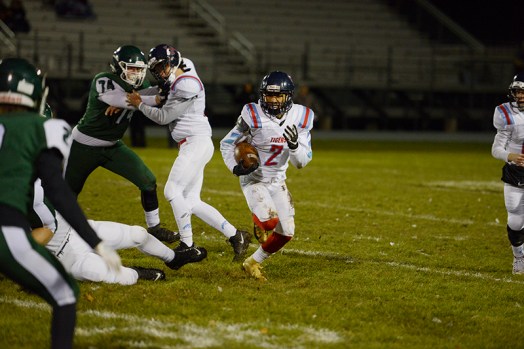 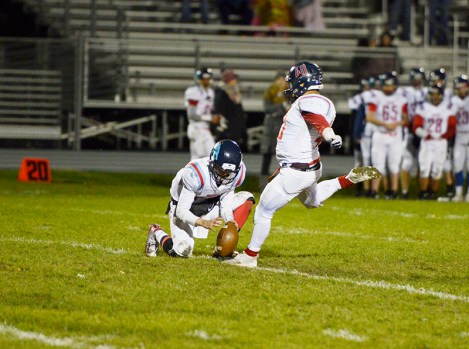 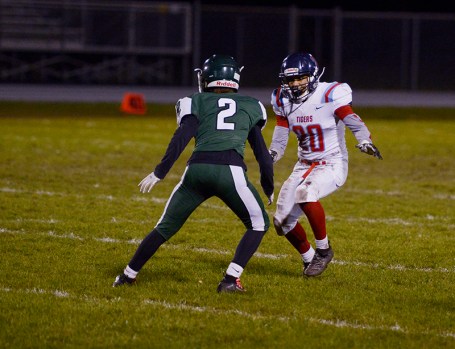 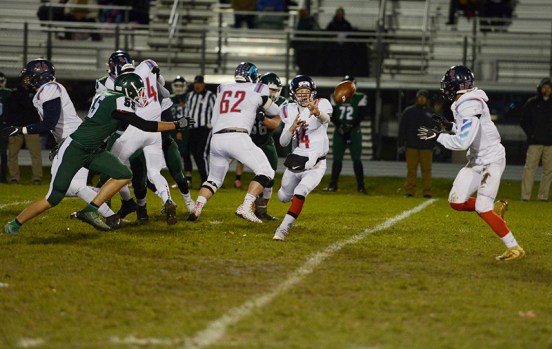 Albert Lea senior quarterback Logan Howe tosses the ball on an option play in the first quarter of Tuesday night's game in Faribault. The Tigers lost the game to the Falcons 21-14, ending their season. - Tyler Julson/Albert Lea Tribune

FARIBAULT — The Albert Lea football team traveled to Faribault Tuesday night for the first round of the Section 1AAAA tournament.

Despite trailing 21-0 in the second half, the Tigers battled back to make it a one-score game late in the fourth quarter. However, the comeback attempt came up just short in the end, as the Falcons hung on to win 21-14.

The Tigers started the game with possession of the ball, and moved down the field rather convincingly before a pair of penalties halted the drive and the Tigers turned it over on downs deep in Falcons territory.

Faribault took over possession and marched down the field to score and take a 7-0 lead. Albert Lea followed that up with a three and out, while Faribault scored on its second straight drive to take a 15-0 lead in the first quarter.

The Tigers offense sputtered after another three and out gave the ball back to the Falcons. However, this time the Tigers defense stepped up and forced a Falcons three and out.

Again, the Tigers started moving the ball well to start their next possession, but an interception near midfield halted all progress. Just before the halftime break, the Falcons failed on a fourth down and short to give the ball back to the Tigers.

Faribault took its 15-0 lead into the locker rooms at halftime.

The Falcons came out in the second half and marched down the field to score on a seven-yard run that put them up by a commanding 21 points.

Albert Lea got on the board on its next possession when senior Janyjor Ruei ran for a five-yard score and senior Izzy Cabezas kicked the PAT to make it 21-7.

The Tigers defense came up big again and forced a Falcons three and out. The wind also played a big factor on the drive, as the Falcons punt was downed at their own 29-yard line. Eventually the Tigers made it down to the one-yard line and on fourth and one, finally punched it in on a J.J. Mucha-Owens run.

Suddenly back in the game, Albert Lea forced yet another three and out from the Faribault offense and took over possession with around six minutes left in the game.

Unfortunately for the Tigers, the magic ended there as they turned the ball over on downs after picking up one first down.

“We stress that all the time and the biggest thing we talk about is learning how to win,” Black said. “Learning how to win is putting your full effort into every single play no matter what the score is at that point and time. When we do that, we play very well. When we make adjustments and guys execute it, we’re playing with every single team in our district.”

The Tigers end their season with a 2-7 record and will lose a host of talented players next season. The likes of Mucha-Owens, Ruei, Hayden Johnston, Brody Dauer and Logan Howe will all graduate in the spring.

“There’s not a whole lot of other players I will get to coach in my life like Hayden Johnston,” Black said. “On and off the field he’s a great leader. … With him, Javarus (Mucha-Owens), Logan (Howe) and Brady (Dauer) for sure all built a culture of togetherness and a team. They’ve really taken the one team, one fight moniker we had and ran with it.

“I guarantee you that in 10 years there’s going to be people saying ‘I played with Hayden Johnston’ or ‘I blocked for J.J. Mucha-Owens’ and that’s something they should be proud of.”