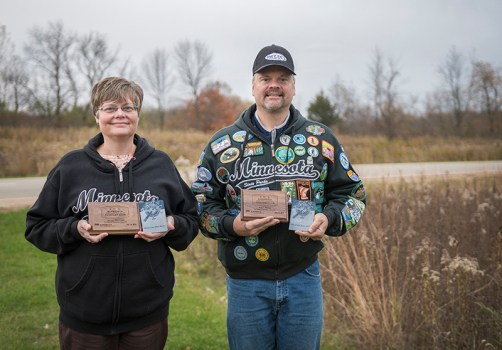 Siblings Scott Peterson and Elaine Learn set a goal to travel to all Minnesota’s state parks back in May 2011, and completed it this summer. - Colleen Harrison/Albert Lea Tribune 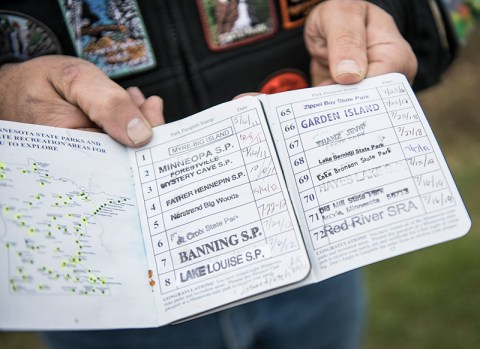 The siblings got their first stamp May 5, 2011, at Myre-Big Island State Park and their last July 16 at Red River State Recreation Area. - Colleen Harrison/Albert Lea Tribune 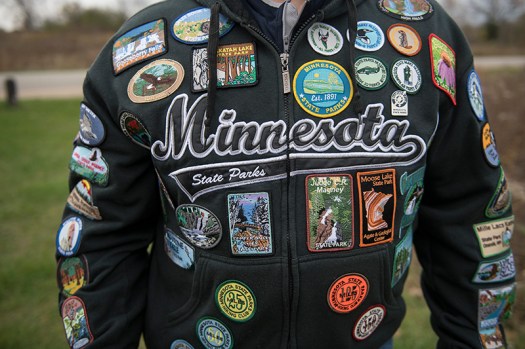 Scott Peterson sewed the different patches he got from each state park onto a Minnesota state parks hoodie. - Colleen Harrison/Albert Lea Tribune 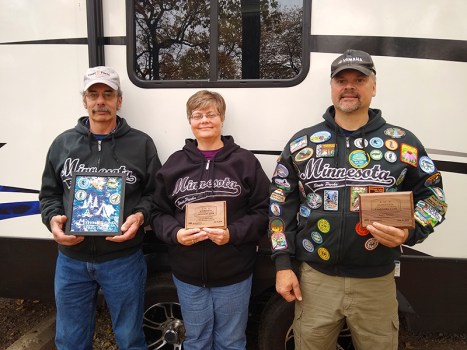 Cecil and Elaine Learn went to all of the Minnesota state parks with Elaine Learn's brother, Scott Peterson. - Provided

Brother and sister visit each of Minnesota’s state parks

Back in May 2011, siblings Scott Peterson and Elaine Learn set a goal to travel to all Minnesota’s state parks. On July 16 of this year, they achieved that goal, reaching their 72nd and final state park.

Peterson said their inspiration to set the goal came after they bought a camper and stayed at Albert Lea’s own Myre-Big Island State Park. Peterson noticed a book available in the park office that allowed visitors to place customized stamps for each park they attend. On May 5, 2011, they got their first stamp at Myre-Big Island.

“It was almost like a challenge when we started,” Learn said. “It was like, ‘Well, we started it and now we’ve got to finish it.’”

“Our goal right when we got the books was to get them all in there,” Peterson said. “We weren’t sure how many years it would take and it ended up taking eight years.”

Peterson and Learn, along with Learn’s husband, Cecil, attempted to get to 10 state parks a year, but according to Peterson it varied by year.

Learn said they sectioned off the state and tried to get to multiple state parks one week. Their biggest trip was when they visited nine state parks on the north shore in one week.

To get their books stamped, all they needed to do was pay a visit to each park, but Peterson and Learn said they stayed the night at at least 50 of the parks. Their favorite activity at each park was hiking around on the various trails, but neither could put a finger on just one as their favorite park.

At various stages throughout their journey, Peterson and Leach earned badges based on the number of parks they attended and when they visited their last park, they were awarded with a commemorative plaque. Their last park was Red River State Recreation Area on July 16.

“It felt so good,” Learn said. “It was like ‘We finally did it.’ I think learning about the whole state of Minnesota was the best part for me, just learning the history here.”

Now that they have accomplished their goal, Peterson and Learn plan to return to a few of their favorite parks and do some more hiking. They have visited a few of the state parks in Iowa, but they don’t have the same programs as Minnesota for visiting the parks, according to Peterson.