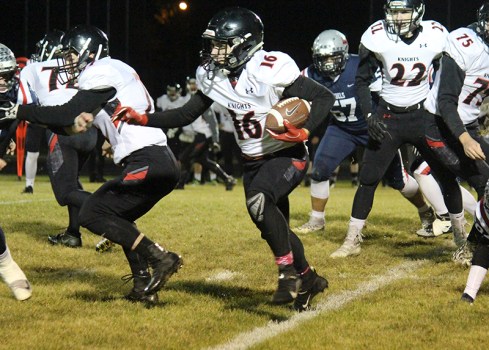 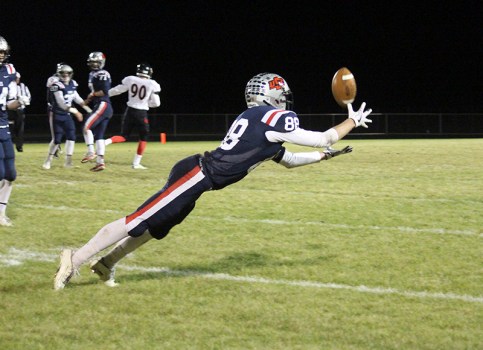 United South Central junior Riley Staloch lays out to grab a catch Tuesday night at home against Alden-Conger/Glenville-Emmons. The Rebels beat the Knights 51-13 to move on to the second round of the Section 2A playoffs. - Photo courtesy South Central News 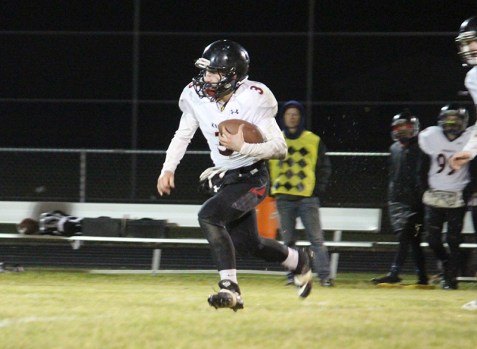 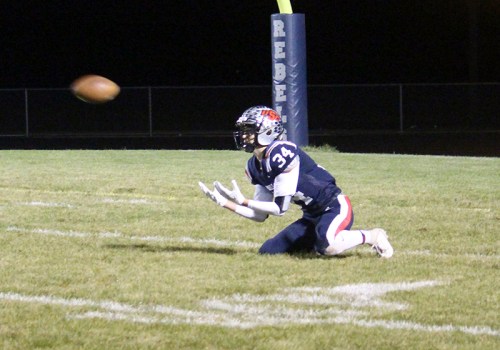 United South Central senior Mark Bushlack drops to his knees to catch a pass Tuesday in the first round of the Section 2A tournament. - Photo courtesy South Central News

The No. 1 seed United South Central football team hosted No. 8 seed Alden-Conger/Glenville-Emmons on Tuesday night in the first round of the Section 2A tournament.

While the Knights were the first team on the scoreboard, the Rebels bounced back in a big way to win the game 51-13, moving on to the second round of the playoffs.

In the first drive of the game, Knights senior Dawson Dahlum threw a short pass to junior Isaac Burgett, who took the ball into the endzone for a 70-yard score.

The Knights’ lead did not last long, however, as the Rebels marched down the field and scored on their first possession. Junior Ethan Dallman threw a six-yard pass to senior AJ Kloos for the score and senior Zach Niebuhr ran in the two-point conversion to give the Rebels a 8-6 lead.

The Rebels scored twice more before the end of the first quarter. Niebuhr ran one in from seven yards out and Dallman ran one himself from 18 yards out. Senior Brevan Linder and Nieuhr each added a two-point conversion after the scores.

Niebuhr found the endzone two more times in the second quarter, one an eight-yard score and the other a nine-yard run. Senior Mark Bushlack kicked both extra points through the uprights.

The Rebels led the Knights 37-6 at halftime.

Dallman scored on a two-yard run and senior Carson Wegner scored on a one-yard run in the third quarter to shore up the game for the Rebels. Bushlack kicked in both PATs.

The Knights scored again in the fourth quarter when junior Isaac Burgett rushed for a 10-yard touchdown. Junior Ethan Greenfield kicked the successful point after attempt.

The loss ends the Knights’ season at 0-9. The Rebels move to 9-0 on the season and move on to face the 3-6 Cardinals of Bethlehem Academy at 7 p.m. Saturday at home.