Much ado about water 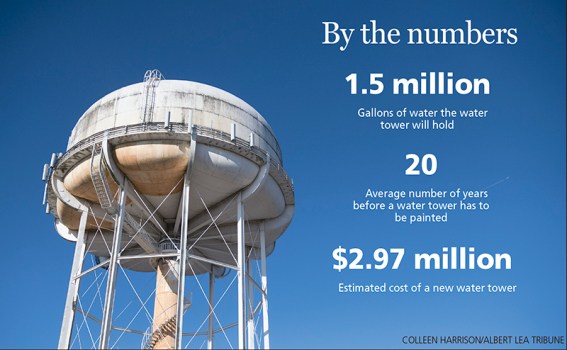 Pictured is the current water tower at the corner of Newton Avenue and Fountain Street in downtown Albert Lea. - Colleen Harrison/Albert Lea Tribune 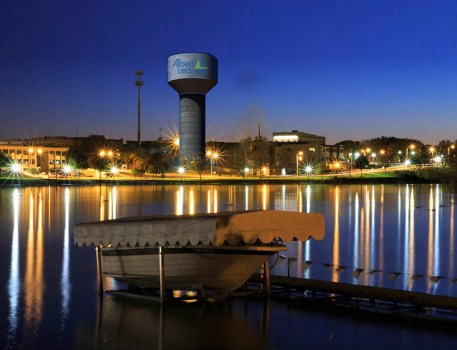 An example of the composite water tower against the Albert Lea skyline. The tower will be 35 feet taller than the existing structure. - Provided 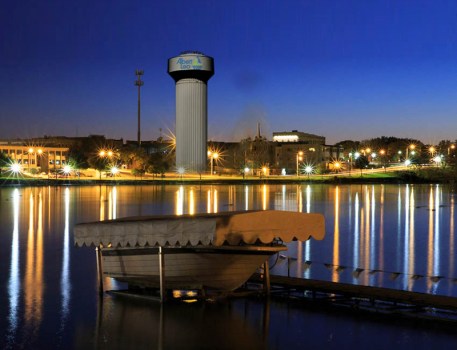 The hydropillar design is made up of a steel base and a steel tank. - Provided 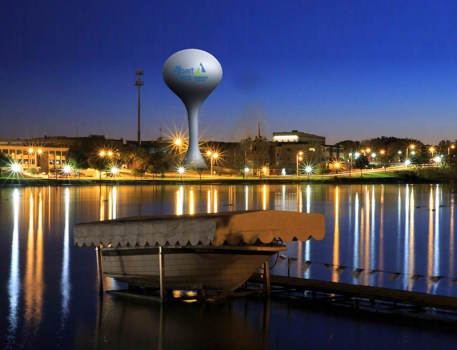 The new water tower built near the intersection of Newton Avenue and Fountain Street will be spherical in shape. The old tower is tentatively planned to be demolished this fall with construction on the new tower being completed in 2022 and the painting complete by June 2023. Provided 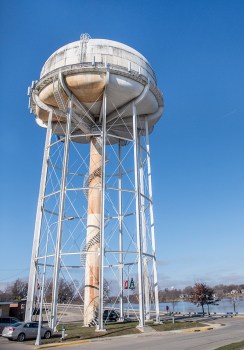 The Albert Lea City Council is looking for feedback Tuesday about the proposed style and location for a new water tower in Albert Lea.

The decision comes as the downtown water tower, which is off of Fountain Street north of Newton Avenue, is deteriorating and needs to be replaced, according to city officials.

The City Council has heard presentations about the possible sites for a new tower but hopes to hear opinions from residents before making a decision, said City Manager David Todd.

An open house begins at 5:30 p.m. and will include a presentation about the pros and cons of various options, along with time for people to share their opinions.

The main question aside from design is whether to build the new tower on the same site — in what some consider prime real estate — or whether to build it in a different location — and if so, where?

The cost of the tower replacement will come from city water funds, with money set aside from within the capital improvement plan, Todd said. The construction is slated for 2021.

The city is considering three styles: composite, hydropillar or spheroid. The tower itself is expected to cost about $2.97 million and would hold 1.5 million gallons of water, said Chris Lowe, a civil engineer with the city engineering department.

Lowe said water towers have to be painted roughly every 20 years — costing about $700,000 each time, depending on the design —  and the lifespan of a water tower is 75 to 80 years. The current tower was built in the 1920s, he said.

City staff in October expressed top support for replacing the new tower at its same location, though seven other sites are also being considered. Lowe said the tower will be have to be built 35 feet higher than the existing tower to fully contribute to the water system.

The current site is also next to a well and treatment system and would have the lowest parking impacts. On the opposing side, it could be a barrier to development in the area if the city wanted to market that property.

“There is an appetite for property on the lake,” Todd said.

If the land were to ever sell, it would cost the city an additional $1.5 million to $2 million to drill in a well and put in a plant at a new location.

Next in ranking are the municipal parking lot between the Department of Human Services and the Eagles Club and the parking lot near the intersection of Main Street and Washington Avenue. Both of these choices would impact parking.

The locations to rank last in the recommendations were the North Broadway parking lot and Central Park.

Todd said he hopes people will attend the open house and share their opinions with the councilors.