Rebels’ season comes to an end 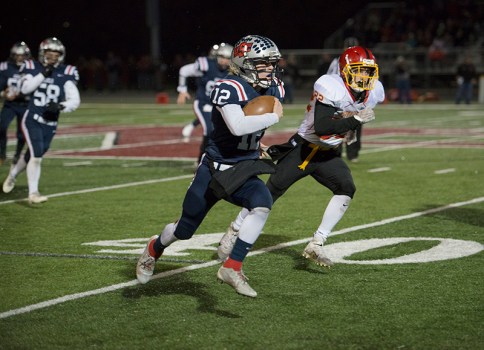 United South Central junior Ethan Dallman scrambles out of the pocket Friday night in the Section 2A championship game against Gibbon-Fairfax-Winthrop. The Rebels lost the game to the Thunderbirds 48-26. - Tyler Julson/Albert Lea Tribune 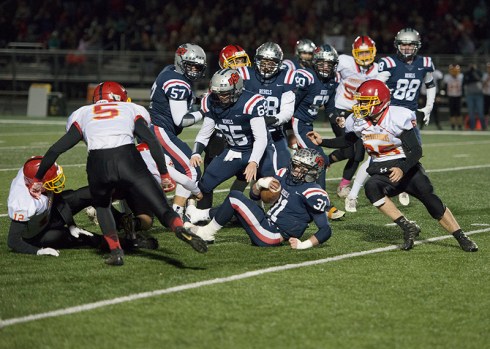 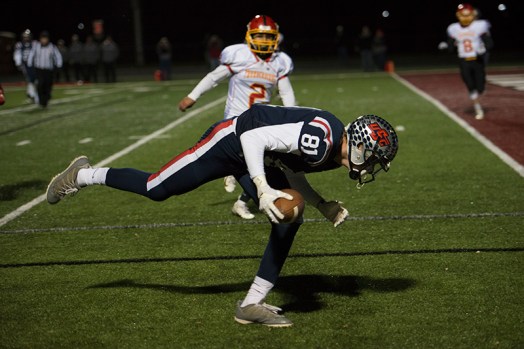 The Rebels fell victim to multiple big plays by the Thunderbirds that resulted in touchdowns. The Rebels offense was unable to match the production, falling 48-26.

The Rebels deferred to the Thunderbirds after winning the opening coin toss. The Thunderbirds took advantage of getting the ball first and took the third play of the game for a 56-yard touchdown run. A successful two-point conversion put the Thunderbirds on top 8-0 less than two minutes into the game.

United South Central answered right back after GFW tried an onside kick, but failed to recover it. Starting on the 50-yard line, United South Central took its time and marched down the field before senior AJ Kloos took a pass from junior Ethan Dallman 12 yards into the endzone. United South Central came up short in the two-point attempt, and trailed 8-6 after each team had one possession.

The Rebels started in great field position on their next drive after another short kick. They marched down the field again, but stalled out inside the redzone. On fourth down, Dallman threw to Kloos in the back of the endzone, but Kloos was unable to hang onto the ball after falling to the ground, giving the Thunderbirds the ball back at the six-yard line.

GFW continued its offensive onslaught on its next drive, moving from the six-yard line and scoring a few plays later on a 66-yard rush. A successful two-point conversion put the Thunderbirds up 22-6 early in the second quarter.

The Rebels cut into the lead on their next drive after Kloos found the endzone for the second time of the game. This score was a 14-yard catch and run from Dallman.

GFW took its fourth possession of the game and soon found the endzone for the fourth time, this time on a five-yard rush.

United South Central again got close to the endzone on its next drive, but a redzone interception ended the drive with no points to show for it.

The Thunderbirds went into the halftime break with a 30-12 lead over the Rebels. Through the first half, with the exception of the drive than ended the half, the Thunderbirds scored on all four of their offensive possessions. The Rebels had two touchdowns, a dropped pass in the endzone and an interception in the redzone.

United South Central scored on its first possession of the second half, using four minutes of clock before senior Zach Niebuhr found the endzone on a three-yard run.

Unfortunately for the Rebels, the Thunderbirds took less than a minute to score again to make it a 36-20 game with seven minutes left in the third quarter.

As the rain and snow started to come down, the Rebels could not gain any momentum on offense as their drive ended when they failed to convert on a fourth and 14 near midfield. The Thunderbirds scored their fourth 50-plus yard touchdown a few plays later on a run up the middle and went up 42-20.

GFW ran nearly seven minutes off the clock before scoring yet again and taking a 48-26 lead with under four minutes left in the game.

United South Central came close to scoring again, but the drive stalled and ended inside the GFW 10-yard line. The Thunderbirds took over with less than two minutes to go in the game and ran the clock to zero.

The Rebels end their season with a 10-1 record and will lose a host of seniors who have been huge contributors to the team the past two years.