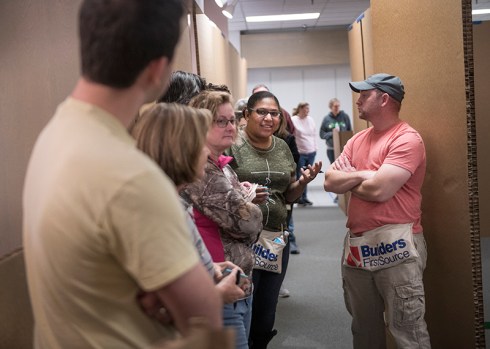 Plans for the clinic have been put into place in life-size walls made out of cardboard, so employees can walk through different scenarios and pick out which design — or combination of designs — will work best for patients and staff. - Colleen Harrison/Albert Lea Tribune 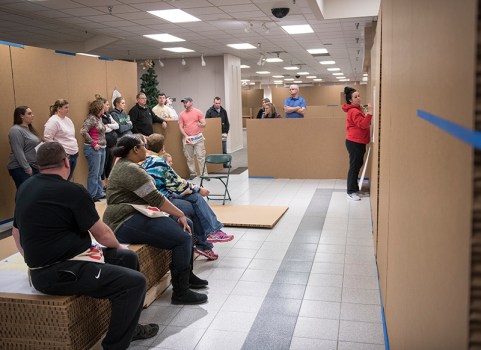 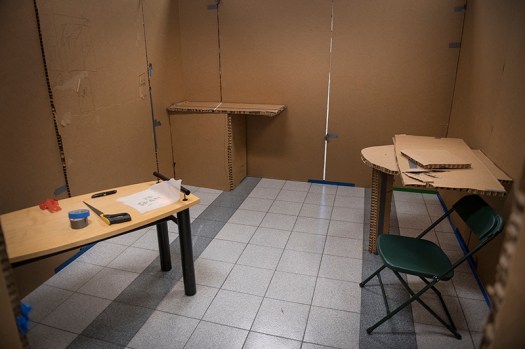 A possible exam room setup was a part of the employee walkthrough Wednesday at the site of the future Albert Lea MercyOne clinic. - Colleen Harrison/Albert Lea Tribune 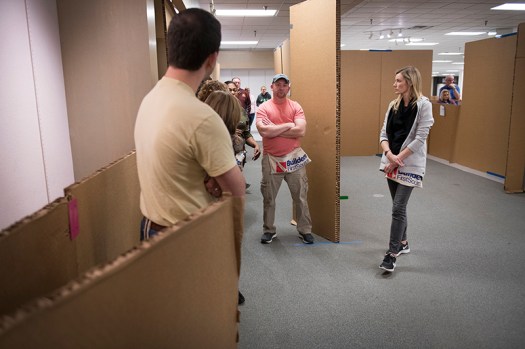 MercyOne staff have gone through the same process with other clinics and have found that after the process, it is seldom that changes have to be made. - Colleen Harrison/Albert Lea Tribune 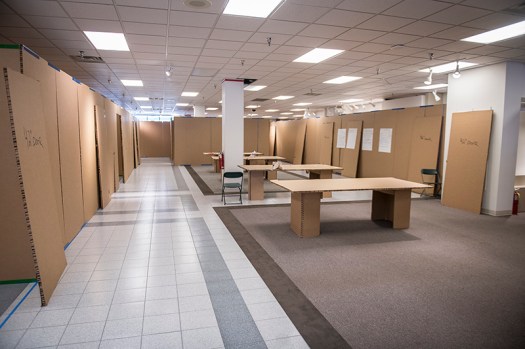 After hours of brainstorming, conducting simulations and weighing out the pros and cons, MercyOne employees, architects and construction workers are finalizing the plans this week for the new clinic at Northbridge Mall.

The process started out with six possible designs and was narrowed to two by Wednesday morning, said Teresa Mock, senior vice president of MercyOne Medical Group — North Iowa. While the plans started on paper, they were put into place in life-size walls made out of cardboard, so the employees could walk through different scenarios and pick out which design — or combination of designs — will work best for patients and staff.

The process, referred to as 3P, incorporates people, preparation and process, Mock said.

“It’s a hard process to do this, but you have to be creative,” she said.

Prior to this week, cardboard walls were put up with the boundaries for each of the expected five phases of the project. The goal this week has been how to get the various elements in each phase within the confines of those spaces. Once the fifth phase is in place, the clinic will occupy 40,000 square feet.

MercyOne staff have gone through the same process with other clinics and have found that after the process, it is seldom that changes have to be made, she said.

Mock said the point is to bring together the people who will be working in the clinic. After brainstorming, the groups of employees share their ideas, talk over the pros and cons, put forward options and then ultimately narrow down to one design.

The final design was expected to be selected later Wednesday and will be in place with cardboard for an open house for the public from 10 a.m. to 3 p.m. Saturday.

The process has provided an opportunity for employees from a variety of backgrounds to offer feedback, including employees in process excellence department, surgery and information technology, along with X-ray and lab technicians, nurses, registration, marketing, clinic managers and directors, among others.

After the design is finalized, it will be turned over to architects who will make official architectural drawings, and then the project will be sent out for bids.

Mock said the hope is for the project be put out for bids by the first of 2020. Construction is expected to take six months.

Tim Mason, who works in the behavioral health unit at MercyOne in Mason City, described the experience as “an amazing process” that involved incorporating ideas from a large group of people and then narrowing it down to one.

Some give and take is required, he said, but in the end, the ultimate goal is to do what’s best for the patient.

Participants each wore tool belts with tape, nails, a tape measure and a pen to utilize as they built and adjusted the clinic out of cardboard.

Robin Retterath, clinic quality and practice leader, who is also a registered nurse, said she loves that the process pulls colleagues from different perspectives to build the best possible clinic possible. She described it as “eye-opening” and said it encourages creativity from all involved.

“I see things from the clinical side, but others might see things differently,” she said.

She said though there is typically some struggling in the middle of the process, the final outcome is always rewarding.

“It’s so great when you see it built and know your perspective was taken into consideration,” she said.

During the open house, there will be several photo booths available at the event, where people can take their picture. The photos will be used to create a large mosaic that will be on display in the new clinic.

The Albert Lea Healthcare Coalition, which will own the building, will also be in attendance at the open house fundraising. The group is asking residents to purchase a “square foot ” of the new MercyOne clinic site.