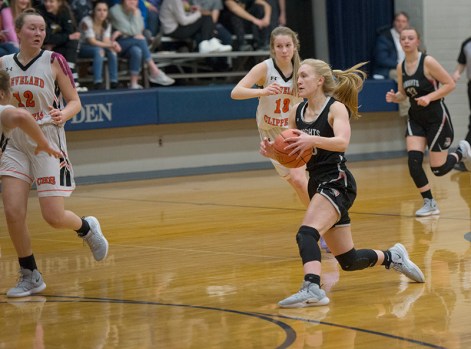 Junior Abbie Theusch brings the ball upcourt Friday night in a game against Cleveland. Theusch was on the bench for much of the first half due to foul trouble. - Tyler Julson/Albert Lea Tribune 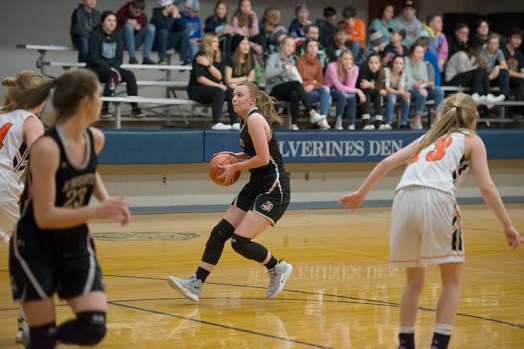 Junior Shay Sailor pulls up behind the three-point line to attempt a shot in the first half against Cleveland. - Tyler Julson/Albert Lea Tribune 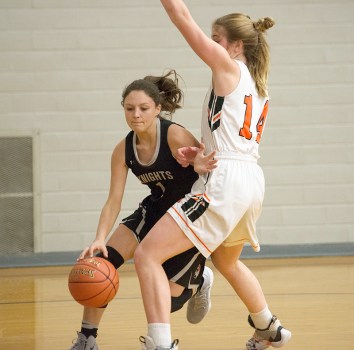 Junior Kylie Korman gets around a defender Friday night in Glenville. Korman scored seven points in the first half and played a big part in the Knights' offense. - Tyler Julson/Albert Lea Tribune 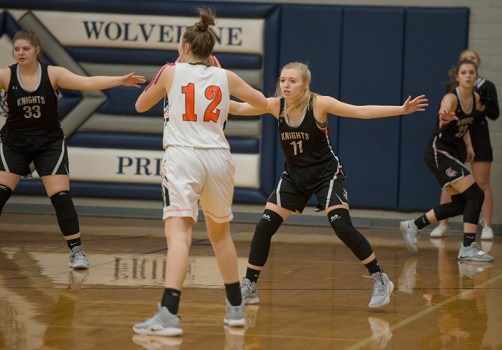 Alden-Conger/Glenville-Emmons senior Chloe Anderson gets her hands up on defense early in the first half against Cleveland. - Tyler Julson/Albert Lea Tribune

Knights hold off rally from the Clippers to win

Despite the Clippers hanging on through a majority of the first half and pulling ahead in the second half, the Knights dominated the last four minutes of play to win 65-45.

Scoring was scarce for both teams through the opening minutes of the first half. Nearly five minutes into the game, the score was 7-3 in favor of the Clippers. Those three points came via a converted and-one opportunity from junior Abbie Theusch. The Knights had no trouble finding open shots and getting into the paint; they were just unable to put the ball through the basket.

A large part of the Knights’ lack of offense was due to Theusch sitting on the bench due to foul trouble; she ended the first half with three fouls.

However, senior Sara Allison stepped up in place of Theusch and scored nine points through the first half. Junior Kylie Korman also played a big role in the offense, scoring seven points in the opening half.

Despite trailing early in the game, Alden-Conger/Glenville-Emmons found its stride and pulled ahead to take a 31-21 lead heading into the halftime break.

The Knights came out to another slow start in the second half, but so did the Clippers. Theusch picked up a quick foul in the opening minutes of the half to land her back on the bench until there were six minutes left in the game.

The Knights relied heavily on the three-point shots throughout the entirety of the game, taking multiple shots from deep, but only converting on a handful. The first three made field goals in the second half were all three-point baskets.

The Clippers gave their best effort in a comeback attempt in the second half, pulling ahead with just over seven minutes remaining. Through 11 minutes of play in the period, the Clippers outscored the Knights 22-11.

Theusch reentered the game in hopes of swinging the momentum back in favor of the Knights. It paid off almost right away, as she took the lead back after her second converted and-one opportunity of the game.

After a timeout by Cleveland, Theusch came up big again with two rebounds that led to assists at the other end as Korman made consecutive shot attempts to give the Knights a 49-43 lead with just over four minutes remaining.

The Knights used that momentum to pull away and win their fourth game of the season.

A host of players scored for the Knights throughout the game, with six different players contributing. Korman led with 16 points, while Theusch was right behind with 15. Allison scored 11.

The Knights move to 4-6 on the season and will play again Monday when they host the Raiders of Nicollet/Loyola.