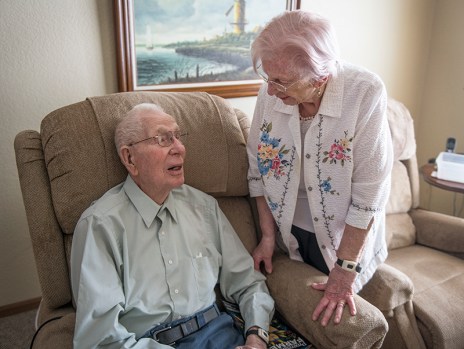 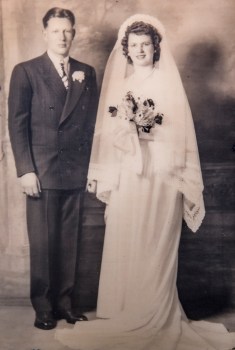 The Reynens were married March 23, 1945, at Hollandale Reformed Church. - Provided 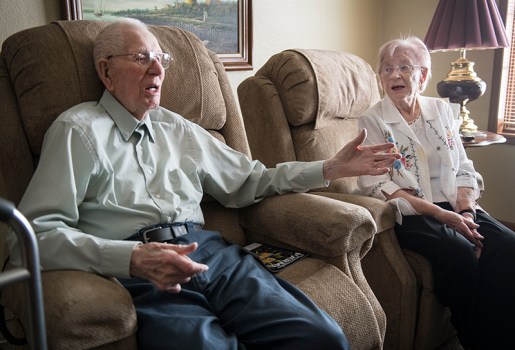 Doris Reynen looks at her husband of nearly 75 years, Albert, as he talks about the first time he saw her at a roller skating rink. - Colleen Harrison/Albert Lea Tribune 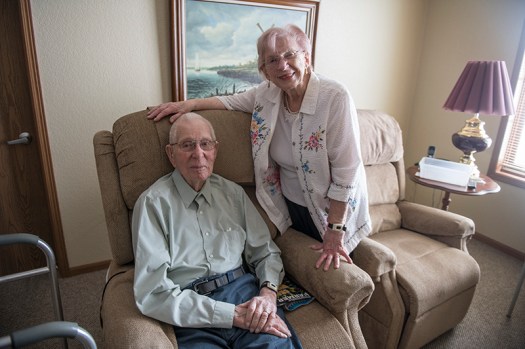 Couple spent most of married years living in Hollandale

An Albert Lea couple is preparing to celebrate their 75th wedding anniversary next month.

Albert and Doris Reynen, 96 and 94, respectively, were married March 23, 1945, at Hollandale Reformed Church in Hollandale.

Doris Reynen said their wedding was the first formal wedding in the church, and they each had one attendant, along with two flower girls.

“I was in love, and things just progressed,” Albert Reynen said about what initially attracted him to his wife.

They said they met through church.

A South Dakota native, Doris Reynen came to the Albert Lea area with her sister. Together, they would go with some of their other friends to church, where she met her future husband, who had lived in Hollandale since 1925.

Albert Reynen said he recalled actually seeing his wife for the first time at a roller skating rink, but said he didn’t ask her out then.

They dated for about two years before they were married, and then lived in Hollandale afterward.

The couple had six children, one of whom died after getting hit by a car when she was 3, and housed several exchange students.

“Having six children was a lot of memories,” Doris Reynen said.

She said they were 4-H leaders until all of the children completed school.

Alfred Reynen farmed — everything from potatoes, onions, sweet corn, field corn and peppermint to  spinach and string beans — and was a member of several boards over the years, including the National Onion Association and the Bayview/Freeborn Funeral Home board.

Doris Reynen was a member of a women’s chorus and was honored for her service to the community. She recently compiled a book with diary entries from her mother’s mother.

Though they don’t remember everything over the years, they said they have lived interesting lives.

Since they retired, they said they have enjoyed traveling and have been to Africa three times, as well as England, Scotland, Germany and Wales, to name a few, as part of tour groups.

They have five grandchildren and two great-grandchildren and have lived at Hidden Creek since October 2018. Though they’ve had a few health issues to deal with over the years, their health overall has been “not too bad,” Doris Reynen said.

When asked what they did to reach 75 years of marriage, she said they worked through their disagreements and didn’t break up at every little argument.

The couple said their children are planning to come to town for a party in March to celebrate their anniversary, along with some of their living siblings.