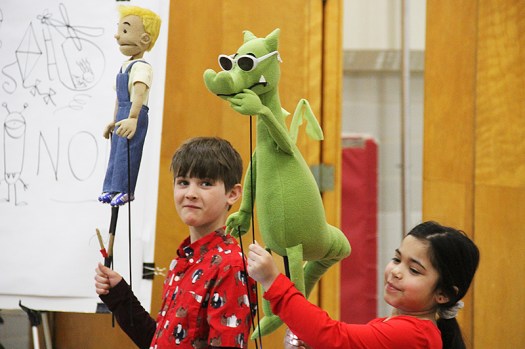 Two students at Sibley Elementary School volunteer to hold puppets made from characters in David LaRochelle's "The Best Pet of All," during LaRochelle's visit to the school on Thursday. Sarah Stultz/Albert Lea Tribune 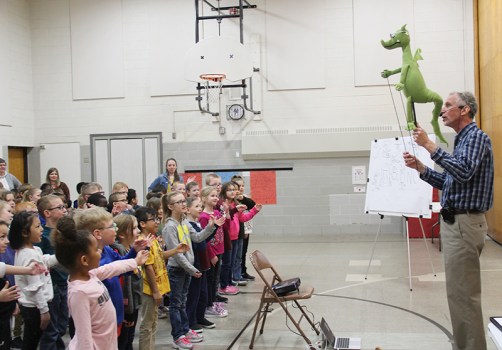 Children's book author David LaRochelle leads a group of Sibley Elementary School students Thursday in exercises with the help of a dragon puppet made to represent one of the characters from his book "The Best Pet of All." Sarah Stultz/Albert Lea Tribune 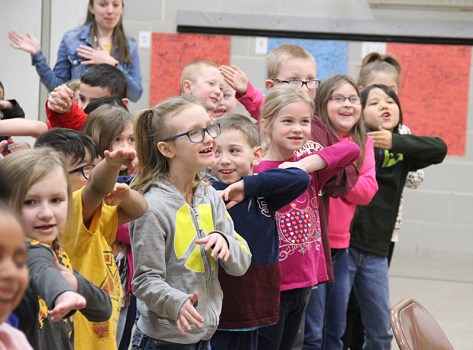 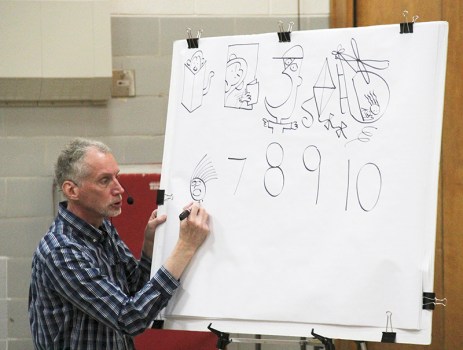 Author David LaRochelle tells and illustrates a story out of 10 numbers at the start of his presentation Thursday at Sibley Elementary School. Sarah Stultz/Albert Lea Tribune

A former fourth-grade teacher from White Bear Lake is sharing his passion as an author with elementary schoolers across Albert Lea this week.

David LaRochelle, who has created children’s books for over 25 years and has had 30 books published, is making presentations at all of the elementary schools in the Albert Lea school district, talking about his experiences as an author and what it takes to get books published.

He is the recipient of  multiple children’s choice awards and is a three-time winner of the Minnesota Book Award.

LaRochelle, whose picture book titles include “How Martha Saved Her Parents from Green Beans,” “Moo!” and “It’s a Tiger,” shared the story of how he got his book “The Best Pet of All” published 6 1/2 years after he first sent his story to an editor.

He said he started with a rough draft and then reworked the story a second and third time before he typed it up and submitted it to an editor.

A month after sending it in, he heard back from the editor, stating she was thinking of publishing it but wanted him to make a few changes.

He said he made the changes and sent it back, but six months passed without hearing anything from the editor. He sent a reminder letter, and two more years passed until he received a letter in the mail stating the editor wanted to publish the story after all, but that she had chosen another person instead of him to be the illustrator.

Two years after that, he received the sketches from the illustrator to go along with his story, and then finally 6 1/2 years after the story was initially submitted, the book was published.

He said in the end he was glad the other illustrator was chosen, and his book has since been translated into other languages.

As an author, he said sometimes he works really hard on his stories and editors still say no to publishing them. He showed a pile of rejection letters he had received from editors.

He said if he had said it was too hard and given up, he never would have had 30 stories published.

LaRochelle gave the students the chance to practice their creativity during his presentation as he told various stories and essentially had them create their own story at the end.

“Sometimes students have a hard time realizing that authors and illustrators are people who used to be kids just like them who had a love for drawing or writing at a young age,” said Kristen Seeger, library media specialist and building technology integration coach at Sibley and Lakeview elementary schools, who helped organize the visit. “It’s fun for our kids to see how someone can grow up to make a living doing what they love.”

She said she also appreciates how authors and illustrators that speak to the students discuss how books are written, illustrated and published, and point out that it takes more energy and time than they may realize.

LaRochelle said he visits about 40 schools a year, most of which are in the Midwest.

LaRochelle’s visits were sponsored by the parent-teacher organizations at each school.