Change happens inside the voting booth 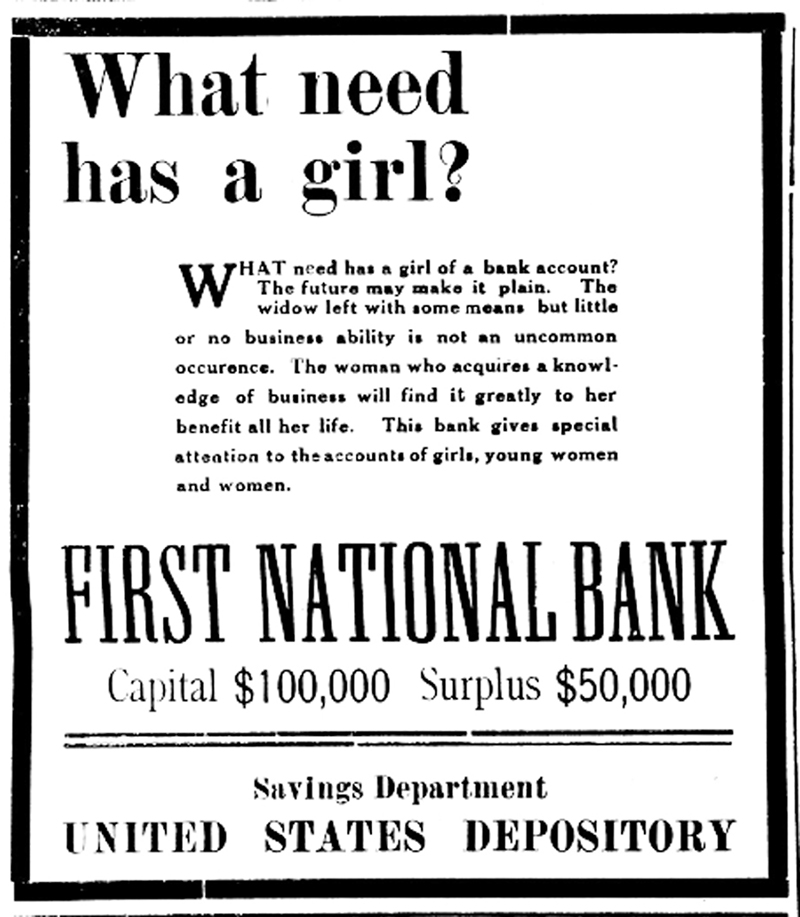 This 1913 bank advertisement encourages women to gain financial independence for the most practical of reasons. - Image from Freeborn County Standard

The surprising power in using your own name

What’s in a name? For American women 100 years ago, just about everything.

For one, if a woman had her portrait taken, it was for a rite of passage like graduation or marriage, and these weren’t usually printed in small town papers before 1920, which makes it a lot harder to uncover photographs of the women whose names dot the landscape of the local  newspaper pages.

Furthermore, women are filed by their husbands’ first and last name in most archives, with only the generic title of “Mrs.” to differentiate them from their spouse. So in some cases the first research hurdle is simply in figuring out these married ladies’  first names, a piece of identification that has seemed so basic for decades now. As such, there is much that remains mysterious about the women in this piece.

The League of Women Voters, as part of their goal to educate the newly enfranchised on the voting process, found it necessary to address the convention of replacing one’s own first name with that of her husband’s.

Women were instructed to use their own first names at the polling place. When it came to voting, a woman’s title did not matter, her marriage status did not matter and her husband’s first name was absolutely inconsequential. The only thing that mattered in the voting booth was her vote, and to access the ballot required her name alone.

Stating her age, however, was not required.  The attorney general advised that age needed confirmation only if the prospective voter looked younger than the voting age of 21, which surely relieved the parties who feared that stating an exact age would keep masses of women from the polls. The League of Women Voters clarified this after receiving inquiries.

Katherine Meighen was an extraordinary woman who lived a rich life full of service and adventure. 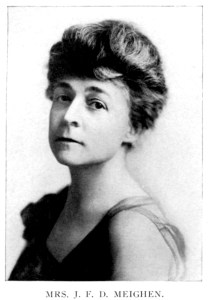 The timeline accompanying this story starts with her first marriage at age 20 to the much older and very wealthy William A. Morin and with her efforts to organize Mower County’s League of Women Voters in Austin.

During the 30 years in between, she raised two sons, buried her first husband at age 40, married her second at age 44 and traveled the globe at a time when most folks were lucky to venture a few hundred miles in a lifetime. With boys grown, rather than luxuriate lakeside between travels, Katherine set about serving her community and country.

The rapid expansion of the Red Cross during World War I gave her a worthy organization to join. J.F.D. Meighen, the man who was not yet her husband, was also heavily involved. 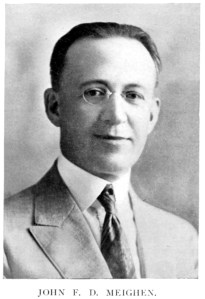 In July 1917, she is listed as an assistant to the Red Cross secretary under the name Katherine T. Morin. (Widows used their first names, perhaps another indication of status via title.)

By the end of the year, she has married highly respected lawyer J. F. D. Meighen, and the following spring her new name, Mrs. J. F. D. Meighen, is on the list as head of the Salvage Department for the local Red Cross. Mr. Meighen is listed as chairman, a position he held for many years.

When the League of Women Voters sprang up in 1920, she was elected chairwoman for the Freeborn County chapter and swiftly set up committees to organize throughout the county, and pulled off a tremendously successful first attempt at voter education in the form of citizenship school. All of this happened in less than three months. 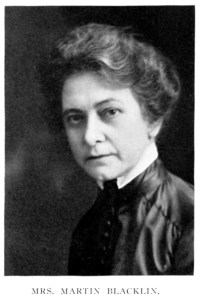 Emily Benson married Martin Blacklin in June 1901. Their wedding announcement in the Standard is full of praise, “one of Albert Lea’s best and most popular young men, and his charming bride was at one time a resident of this city and has many friends to welcome her here.”

Indeed, they remain a popular pair from the sounds of a 1908 Standard article that tells of the Blacklins leading a grand march of 120 couples at the hospital charity gala. Emily Blacklin was credited for the success of the event, which raised $200 for the hospital.

Her work on behalf of the hospital and community intensified during World War I, and continued on for the rest of her life. She is regularly mentioned in articles about the League of Women Voters, but left the leadership to others. 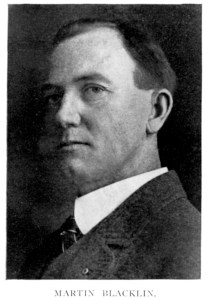 While Martin Blacklin was active in community affairs, he appeared to take a more casual approach. For Registration Day  committee assignments, he is listed as a clubs and lodges  representative under committees on marching. His former righthand gal in the corset business, Bess Tingley, happened to be on the same committee. Subsequent organization listings often show Emily Blacklin as one of the people in charge, and  his name included among the regular volunteers.

Red Cross Appointments published in November 1917 list Emily Blacklin as superintendent of the Hospital Garment Department, a role for which she was highly commended. The above photo was published in a hardcover book documenting the greatness of Freeborn County people during The Great War. It shows a woman who knows much more than the young lady who first came to Albert Lea as a trimmer for Caroline Narveson’s millinery shop.

In 1908, when  Anna Marx with the chic name and modern career turned 40, she became Mrs. H. J. Harm and her new name stayed mostly in the social columns for several years, with the exception being reports of accompanying her husband on business trips.

H.J. Harm served a term as mayor of Albert Lea not long after they married, and in the early years of their marriage he is the more politically active of the two, but by the end of the decade, her civic zeal surpassed his.

His political leanings are less clear than his support for women’s political participation. In June 1912, a letter published in the Standard thanks H. J. Harm for helping her procure a ticket to the Republican convention in Chicago where she found great inspiration in witnessing so many women engaged in the political process.

The Standard on Sept. 4, 1912, lists H.J. Harm as having just attended the Progressive Party’s state committee meeting in St. Paul — this being Teddy Roosevelt’s Bull Moose party, and the only major party during that year’s presidential election to support women’s suffrage.

Anna Harm, like many of her contemporaries, became involved in civic leadership during The Great War.  For the big Registration Day preparations in June 1917, she’s listed on the Ladies Auxiliary Committee. In November she is listed as a member of the pressing committee for the Red Cross. A few months later in January 1918, she is elected vice president of the Woman’s Hospital Auxiliary.

The following September, the Standard credits her in a front-page article for the successful execution of a flower sale that raised $402 for the Red Cross.

In April 1920, several months before she could vote, Anna Harm is listed as a delegate to the Democratic State Convention in St. Paul, along with E.E. Dame, J.F.D. Meighen and the elder Mary Meighen. By this point, the Democratic platform did support full suffrage for women.

Two years later, in March 1922, Anna Harm again serves as Freeborn County delegate at the Democratic state convention. Dame had moved to Michigan by this time, and thus is absent from the delegate list, as is J.F.D. Meighen; however, his mother, Mary Meighen, is among the Albert Lea delegates listed.

Evalyn Eliza Dame, was a force among women and integral to the local suffrage movement.

In spite of her oversized personality and active role in local civics and business, a photo has yet to make itself known. Fortunately, as a prolific writer, speaker and activist, her words are easily found, even if her visage is not. And so, she is represented here by quote in leiu of portrait.

Born in Minnesota around 1856,  she grew up in Shakopee as Eva Brown, her attorney father active in local politics with a reputation for fierce independence — a trait she came by honestly.

Census data from 1900 places her in Chicago, widowed with a daughter, Bessie, born around 1886. The details of her marriage remain a mystery, including her husband’s first name. At the very least, her husband should be credited for supplying such an appropropriate last name, given her great passion for women’s suffrage.

To fairly tell of E. E. Dame and her ideas and adventures requires a book-length chapter, at least. As a supporter of woman’s suffrage, she spoke all over the Midwest, wrote op-eds that display an impressive intelligence and wit and even traveled as a delegate to the Democratic National Convention in San Francisco, with the elder Mary Meighen as her  alternate.

Her interest in politics went far beyond suffrage, and she was a popular surrogate on the campaign trail for democratic candidates even before she could vote.

She left the area in 1921 at  65 to be with her daughter in Ann Arbor. But Michigan was far from her final resting place. She had another 20 years of living to do, and it included California. So far, the only image found of E.E. Dame is a modest gravestone in Los Angeles County; her epitaph simply reads Mother. 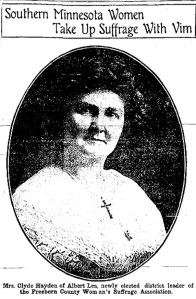 Mrs. Clyde Hayden received much acclaim for her leadership in the suffrage movement. The above photo of her was printed in the Minneapolis Morning Tribune, in an era when women’s portraits were seldom published in newspapers, especially regarding politics and business.

While she garnered the most media coverage for local suffragette activity, she also left the fewest tracks in Freeborn County. In spite of her press attention, it proved difficult to learn so much as Hayden’s first name, let alone details about her life before and after her time in Albert Lea, which by all accounts was a brief but bright chapter.

The first mention of her in the Freeborn County Standard is a social brief from April 1913. In July 1914, Mrs. Hayden is listed as secretary and librarian of the local Child Life chapter. She hit the big time in May 1915 when elected president of the Freeborn County Woman’s Suffrage Association,  prompting the newspaper photo.

Only months later in October 1915, a going away party for Hayden is announced, but she stayed long enough for Albert Lea to host the Minnesota Women’s Suffrage Conference in January 1916. She also traveled in the spring to give suffrage talks throughout Minnesota and Iowa.

In July 1916, The Standard reported one last time on Mr. and Mrs. Clyde Hayden as they had reached their new Montana home.