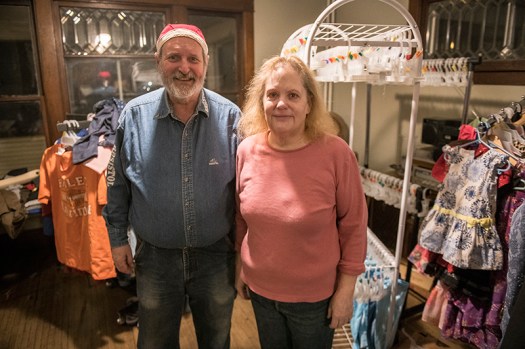 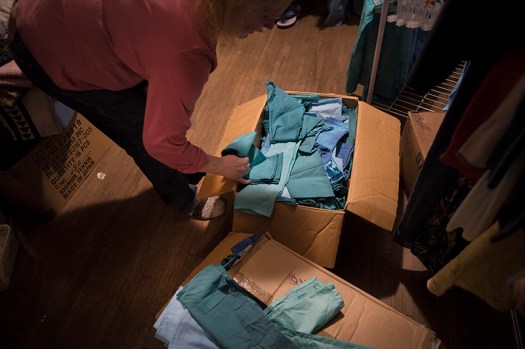 The couple goes around to different hotels and motels in the area as well as different parts of the country to pick up used sheets that would otherwise be thrown away. The Millers take the sheets and wash them, dye them and tear or cut them into different bandannas and do-rags to give to those in need. - Colleen Harrison/Albert Lea Tribune 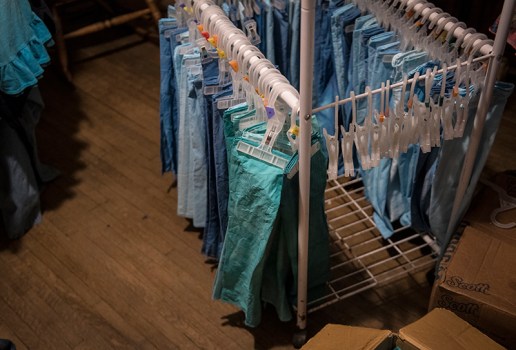 The couple started Ministries of Project Happiness when they lived in Colorado, and then restarted it when they moved to Minnesota a few years ago. - Colleen Harrison/Albert Lea Tribune 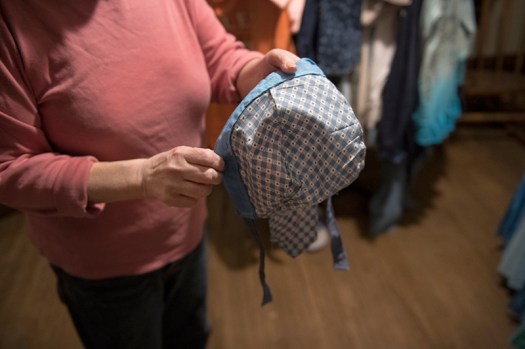 While initially the bandannas and do-rags were given out to homeless people, the do-rags have become popular for those going through cancer treatment, according to the Millers. - Colleen Harrison/Albert Lea Tribune 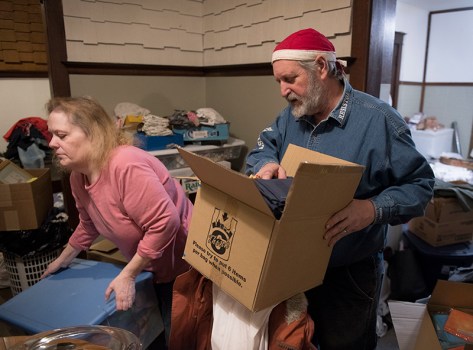 The Millers make everything in their Albert Lea home, and also have pen hours at the house where they sell items to fundraise for the supplies they use to make the do-rags, bandannas, purses and other items. - Colleen Harrison/Albert Lea Tribune

Ninety percent of hotel sheets end up in landfills, according to one Albert Lea couple. So they decided to do something about it.

Richard and Jane Miller lived in Colorado and were on a trip to donate socks and other items to the homeless when they realized that many hotels and motels throw away their used sheets after only a few months. Some might be stained, but otherwise there’s nothing wrong with the sheets. The couple decided there had to be a use for the materials, and eventually found out they could make bandannas by tearing the sheets and then hemming them. They started dying them as well to offer different colors to the homeless people they gave the items to, and eventually started making do-rags to donate as well. It was while they were living in Colorado that they started the nonprofit Ministries of Project Happiness, and also led a nondenominational Bible study and a homeless ministry out of their home, as Richard Miller is a certified pastor.

When the couple moved to Minnesota about four years ago, they found that while there wasn’t as much of a homeless population in the Albert Lea area, there were still people who could benefit from the items, and once again started a Ministries of Project Happiness nonprofit.

“Then we came up here and were here for over a year, and I thought, ‘I want to do something,’” Jane Miller said. “I’m not used to just not doing anything.”

A number of cancer centers in the region now await the deliveries from the nonprofit for patients going through chemotherapy and other cancer treatments.

The couple has made delivery runs around the region, including to Iowa, South Dakota, Missouri, Kansas and up in the Twin Cities and other northern parts of Minnesota. They also have an arrangement where if they bring items to a local McDonald’s, they’ll get them to a woman at a Wisconsin Ronald McDonald House who will distribute the items. The couple has also started working with Make-A-Wish, and they donate do-rags and bandannas to summer camps for children fighting cancer.

“About 12.7 million people a year are diagnosed with cancer in the U.S.,” Richard Miller said.

“That’s an awful lot of people. If we can get this expanded enough, we could maybe help all of them.”

The couple goes on trips out West to distribute items, as well as pick up more sheets. On their last trip, they went through South Dakota, Montana, Seattle, down past San Francisco and back through Utah, stopping at 52 different places to give out bandannas, do-rags and socks to the homeless or to cancer centers. They took 9,000 items to hand out, which they said cost $2,700 to make. Shipping the items would’ve added too much of a cost on, they said, as opposed to driving out and delivering the items themselves.

When the Millers get feedback from someone in need who has received one of their items, it helps motivate them to produce more. They love getting pictures of people enjoying their donations.

“(One woman) sent us a message. She said she was really depressed when she lost her hair and couldn’t find anything that she could wear,” Jane Miller said. “When she was at the cancer center, they gave her a do-rag or a bandanna and it really brightened her day.”

The Millers have also made some purses out of donated items, such as jeans, and fill the purses with toiletries and other hygiene items to give out to homeless women.

Richard Miller was able to obtain a grant from Freeborn-Mower Cooperative Services that has gone toward thread and dye. The couple plans to keep applying for other grants, as their goal is to be able to work full time on the nonprofit. Currently, Richard Miller works part time at Walmart and delivers for the Freeborn County Shopper. He has also been a professional clown for over 30 years, and sometimes is hired for events or parties. Jane Miller said she cannot work due to medical issues.

The couple is hoping to build up a network of financial support where people and businesses can donate sheets and other items to Ministries of Project Happiness. They also are starting to offer sales out of their home from 1 to 6 p.m. Monday through Saturday, where items are for sale at a reduced price. All the proceeds go toward thread and dye for the items the Millers make to donate to others, the tags they print and attach to items and then to gas for the distribution trips they go on. Richard Miller always has a stand at the Freeborn County Relay for Life where he sells bandannas and do-rags as well. They also do some sewing and mending for people at a reduced cost to put more money back into the nonprofit. Those services and the sales are another way to help others locally.

“It helps the community, people that can’t afford a lot,” Jane Miller said. “That gives people a chance to donate if they just have clothing, or even when they don’t have a lot and they come in and buy a piece of clothing for $1, it helps.”

If nothing else, the project fights waste, the Millers said.

“Otherwise, 90% of those sheets are going in the landfill,” Richard Miller said.

At the end of the day, being able to help others makes everything worth it for the Millers.

“It’s so overwhelming, especially when we go out on a trip, to be able to actually get out and do it, I can’t even describe it,” Jane Miller said. “It’s really touching.”

“When you can go to a cancer center that’s seeing thousands of patients, it really means a lot to know that you’re able to help some of them,” Richard Miller said.

Ministries of Project Happiness is at 807 S. Newton Ave. in Albert Lea. It can be reached on the nonprofit’s Facebook page by the same name, and can also be reached on Richard Miller’s cell phone at 719-289-4805.