Members of an exclusive club 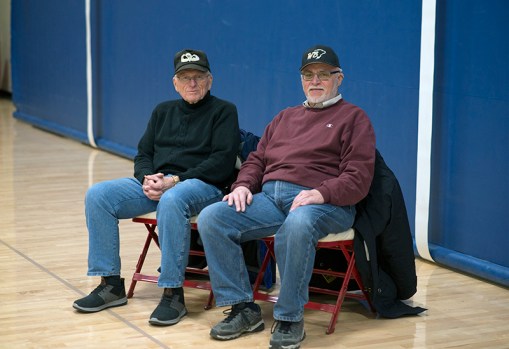 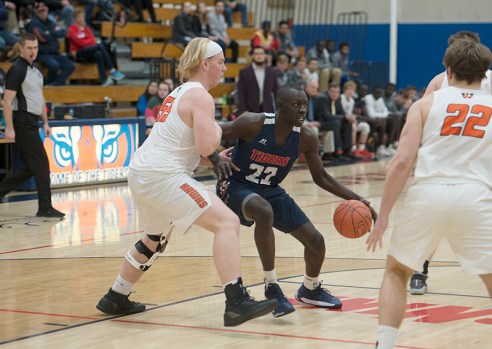 Albert Lea senior Chay Guen fights for position in the lane at a game against Winona. Guen had 16 points, including three big dunks in the 63-61 win over the Winhawks. - Tyler Julson/Albert Lea Tribune 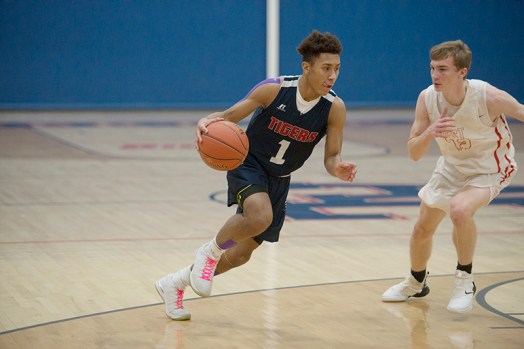 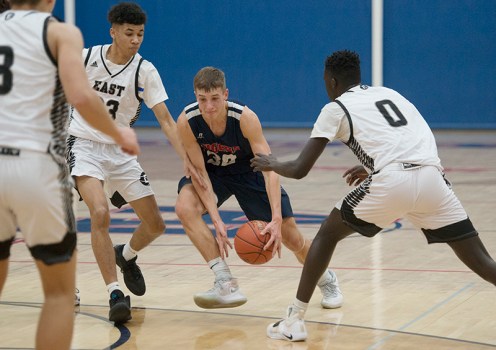 For anyone who has regularly attended home Albert Lea basketball games, one sight has become a staple of the events. A row of folding chairs reserved for a few former Albert Lea educators can always be found along the Tigers baseline.

The chairs have once been the seats of many former Albert Lea coaches, teachers and administrators, including Orrie Jirele, Jim Gustafson, Dick Nielsen, Jerry Kaphers, Davis Gilbertson, Leo Holl and Jim Munyer. 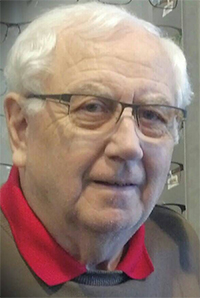 The tradition started in the mid-’80s when many of the school’s faculty were required to take shifts at basketball games checking tickets of spectators who entered. When the games were played at Southwest Middle School, before the construction of the current high school, Holl said some of the staff would pull up chairs to rest on where they would stay for the remainder of the games.

When the new gymnasium was built, although some of the staff did not have to work the events, Munyer said the tradition followed.

“When we went from Southwest to here it was just kind of a transition,” Munyer said. “We walked in before the first time, and the custodians already had chairs set up for us, so we sat there.”

Although the exclusive club had many members sit in the chairs in the past, the group is now down to Holl and Munyer.

Gilbertson, or “Gilby” as he was known within the community, was always a face on the sidelines at the basketball games before his passing last fall.

Munyer talked about the impact Gilbertson had, even when he was not in a traditional coaching role.

“Even when he wasn’t actually coaching, he was coaching from that chair,” Munyer said. “He would yell at the players to get over here or over there. He wasn’t the coach. The school wasn’t paying him anything, but he was still trying to coach. You couldn’t take that out of him.”

The group has seen nearly everything over the past 35 years. Many different players have passed through, and Holl and Munyer named Ben Woodside, Paul Woodside, Mark Neilsen, Jay Gustafson and Mike Peterson as just a few of their favorite players to watch.

They have also seen teams struggle to win games in the past, which makes seeing the success this year’s team has had all the more enjoyable.

“You’ve got to support them, win or lose,” Munyer said. “You’ve got to be able to say ‘next game is another game, let’s go out and try it again.’ We’re just happy to see them doing well this year. But whether they win or lose, the important part is that they’re learning to play the game, they’re getting along with other people and learning to become a better person.”

While they have their own reserved seating at the basketball game, Holl and Munyer said they like to attend other Albert Lea sporting events as well.

“We’re just a bunch of ex-teachers that like to come up and watch the kids play,” Holl said. “As a teacher, kids liked to see you at the games. We like sports, so we’ll come and watch. You get to know the kids and you want to support them.”