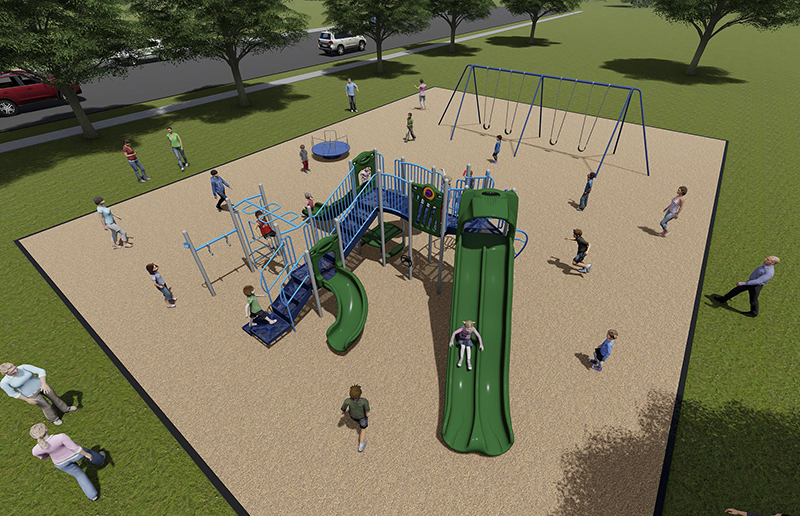 This rendering shows what the new playground in Freeborn is expected to look like. - Provided

FREEBORN — After more than three years of fundraising by a group of volunteers, the city of Freeborn will soon benefit from new playground equipment for area children.

He estimated there were about 40 children in the small community in northwestern Freeborn County.

Beach said the city previously had decent playground equipment, but it was worn out and next to the old Freeborn school, which has had break-ins and vandalism over the years.

“The equipment over there didn’t meet the standards we need now,” Beach said.

A group of volunteers decided to meet every Wednesday starting in July 2016 for a meat raffle at TB3’s and has faithfully done so ever since, raising about $40,000, as of mid-January with raffle sales and donations.

Sharon Honstad, one of the volunteers, said the cost of the new GameTime commercial park equipment and ground work to get it in place is $60,000 through Minnesota Wisconsin Playground. She said the city agreed to purchase the equipment early at a cheaper winter price, so the equipment has already been ordered as the group continues to fundraise for the remaining funds.

The meat raffles have included 10 to 15 meat packs a week, rotating between meet from Conger Meat Market in Conger and Morgan’s Meat Market in New Richland.

“We have had some really good supporters,” Honstad said.

In addition to the raffle, TB3’s also typically has a burger or taco special each Wednesday night to help bring in more people to support the cause.

Honstad and Beach said the volunteers would love to eventually raise money for a shelter at the park as well, to provide a space for parents to sit out of the sun and for families to utilize for picnics or parties.

Beach and Honstad encouraged people to come out to the meat raffles at 5:30 p.m. every Wednesday night indefinitely at TB3’s to help raise the remaining needed money.

Donations are also still being accepted via check made out to the city of Freeborn, designated for playground equipment, at Freeborn City Hall.