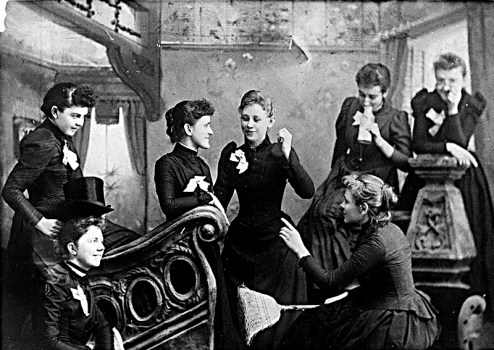 This photo of students at Albert Lea College was taken in 1886. The school was a boarding preparatory school for young women whose families could afford a private high school education. A young Katherine Truesdell (who would become Katherine Morin and then Katherine Meighen) attended the academy not long after the photo. - Photo courtesy Freeborn County Historical Society 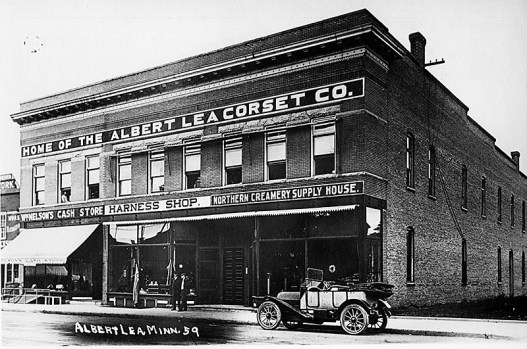 This exterior photo above shows The Albert Lea Corset Company as it looked, circa 1910. The interior shot below is most likely the second-floor sewing workroom. - Photo courtesy Freeborn County Historical Society 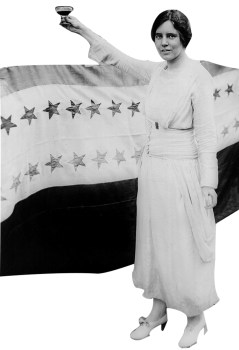 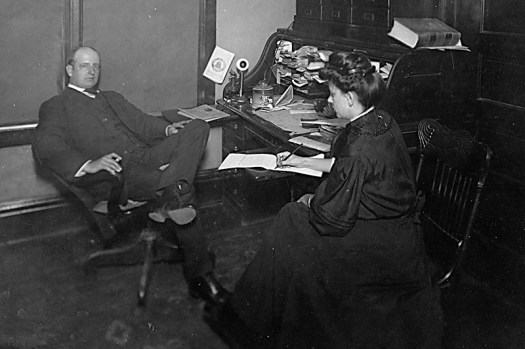 At right, Bert Skinner and one of his employees at work in his office. The identity of the woman is unknown. She could be Bessie Olson or Anna Marx or someone else entirely. - Photo courtesy Freeborn County Historical Society 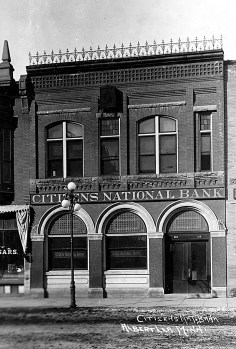 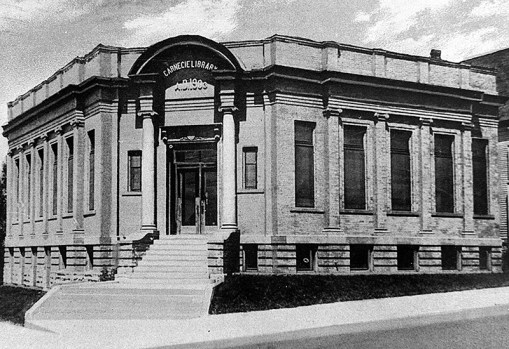 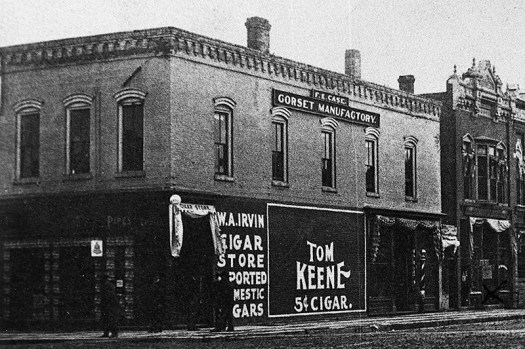 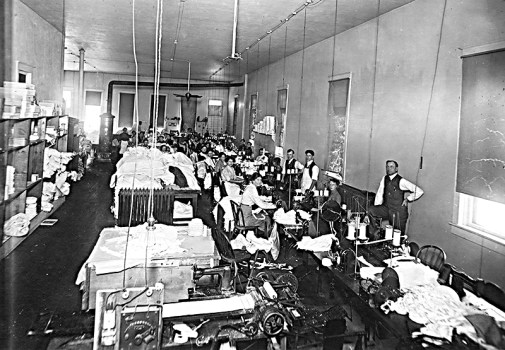 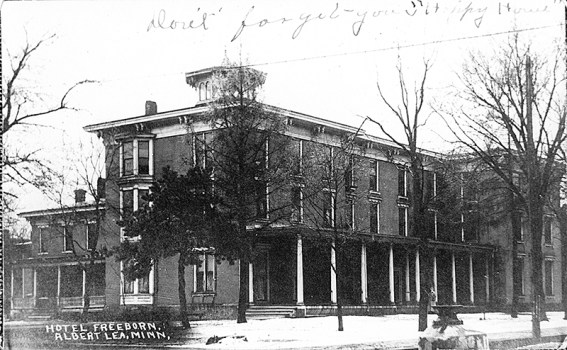 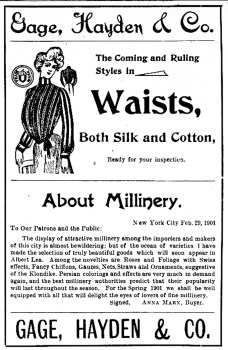 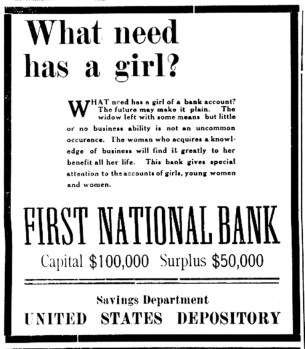 This 1913 bank advertisement encourages women to gain financial independence for the most practical of reasons. - Image from Freeborn County Standard

The women of Albert Lea were a vital organizing force for woman’s suffrage, first at home in Freeborn County and then in neighboring counties and beyond.

Enthusiastic warriors for fair representation under the law, their work was lauded by leaders at both the state and national level. The most devoted suffragists went on to represent Minnesota in national political conventions.

The area’s most influential citizens led the way. The women were educated and had experienced some measure of independence, whether through extensive career experience before marriage, or after being widowed or simply because their education and income level allowed them to participate in the mind-expanding, spine-building experience of world travel.

The women featured in this story were fortunate to have men in their lives who supported their participation in the suffrage movement. These were Albert Lea’s esteemed gentlemen, the most engaged members of the community — successful businessmen, lawyers, judges and at least one mayor, those men whose names mark the buildings and streets of Albert Lea to this day.

Part of the success for women’s suffrage in Albert Lea was due to an atmosphere that allowed women to participate, if not shine, in the business community. Women were encouraged to get an education, to pursue a career, to participate in civil affairs and even to get their own bank accounts.

Albert Lea College was a preparatory school that educated women in the traditional domestic arts but also science and sports, preparing them for a secondary education. The mere presence of such an institution made Albert Lea a friendly place for women who wanted to pursue ambitions beyond the domestic sphere.

There were a handful of women-owned businesses such as Caroline Narveson’s Millinary Shop and Mrs. Evalyn Dame’s Common Sense Improvement Shop, as well as women employed by larger firms and praised in the papers for their accomplishments.

Women and the war

Women in business were still rare, but their energy and skill had always been welcome when it came to charity work. The massive citizen effort to support the country during World War I provided a national platform for women to show their fellow citizens just how well they could get things done.

Women were key to supporting the war effort at home. This was true across the country, and also very much so in Albert Lea, where their work for the local Red Cross was so effective, they temporarily ran themselves out of work. There is a significant overlap between the leaders, organizers and supporters of the Freeborn County Red Cross with those of women’s suffrage.

The suffragists in Freeborn County were practical, whip-smart,  hard-working and fueled by optimism.

They believed in the value of participating in a democratic civil society, being involved in the process of governance, not only for the benefit of one’s own family, but for the good of the entire country.

The Freeborn County League of Women Voters that formed in the spring of 1920 was dedicated to providing a nonpartisan education about the privilege and responsibilities of participating in a democracy.  The group understood these ideas as existing outside of political party, and fundamental to freedom.

These are women who  understood that people must participate in a democracy in order for it to stay a democracy, still relevant after all these years.

Anna Marx, originally of Shakopee, arrived around the turn of the century in an Albert Lea that was swiftly growing from a country village to a bustling town.

She was, by all indications, a hustling businesswoman. In the span of seven years, she is mentioned in the Freeborn County Standard’s Curbside Chronicals section as having gone on at least six business trips.

As the millinery buyer for the local big four department stores, she traveled to New York City, Chicago and St. Paul.

The first mention, in March 1901, is paired with the advertisement for Gage, Hayden & Co below, which features a letter from Marx to the ladies of Albert Lea.

Marx was joined by a female colleague and the both store owners on her last retail buying trip to be written up in the Standard  Feb. 12, 1908, quoted in full below.

Suffrage leader Katherine Meighen, 48, of Albert Lea travels to Austin to help the women of Mower County organize a women’s voting league of their own.

Citizenship school, the first outreach event organized by the newly-formed Freeborn County League of Women Voters, took place over two afternoons and evenings in the Business Men’s League rooms with the of purpose educating women on the processes of government, elections and how to be an engaged citizen of a democracy.

As the league was strictly nonpartisan, it provided a platform for both major political parties to state their principles. Mrs. E. E. Dame spoke on why she was a Democrat. And Mrs. J.A. Fuller spoke on why she was a Republican. Child care was made available, and attendees were encouraged to bring notepads so they could share what they learned.

The school was such a success, it was written up in the Minneapolis Morning Tribune, which reported that more than 200 women  had attended.

The conference was a big enough deal to be written up in The Duluth Herald, The Minneapolis Sunday Tribune and even the Swedish American Post. Mrs. Clyde Hayden seemed to be the organizing and publicizing force behind the quarterly conference being held in Albert Lea.

Suffrage leaders, organiziers and activities  from all over Minnesota and further arrived by car and the Rock Island train to participate in the two-day event.

The bulk of the convention took place between The First Presbyterian Church and Carnegie Library. Students at the high school were also privy to a lecture about the movement from one of the visiting activists.

The conference happened a year and a half before the United States officially joined World War I. Most everyone’s energy would be taken up in supporting the nation’s war efforts until 1919 when the issue of woman’s suffrage again became a central issue in American politics.

For their honeymoon, they travel to the World’s Fair in Chicago to take in such novel delights as Tesla’s City of Lights and the Japanese gardens. It was the biggest spectacle of its kind to date.

This trip was the first of their many travels around the world together.

Among the many modern marvels on display, the world’s first ferris wheel premiered on the midway.

“Miss Anna Marx of the millinery department and Miss Bessie Olson of the ready-made dress goods department of Skinner, Chamberlain & Co. have gone to New York City where they will soon be joined by President Bert Skinner and W.G. Chamberlain of the company in buying spring goods for the big store.”

Several incarnations of a corset company operated in Albert Lea during the late 19th and early 20th century.  For much of this time, the man in charge of the whole affair was Mr. Martin Blacklin. Frequently named in the local papers as a man-about-town, informal photographs depict a sharply-dressed gent, hat cocked at a jaunty angle and cigar in hand. In the workroom photo at right, the man in the foreground  looks like Blacklin, sans accesssories. He is clearly in manager mode here.

Blacklin not only employed a large number of women to manufacture the garments, but for many years, his right-hand person was a woman. Miss Bessie Dame, daughter of local suffrage leader and businesswoman, Mrs. E. E. Dame. Miss Bessie Dame (who would become Mrs. L. E. Tingley) also enjoyed frequent mentions in the local paper, both in the social pages and as management at the corset company.

This excerpt from the Freeborn County Standard on March 4, 1914 typifies her numerous mentions over the years, “Miss Bessie Dame returned Thursday from a visit of three weeks to friends in New York City for the Luce Corset Co.” Even Mrs. E. E. Dame herself traveled on behalf of the corset company, once or twice.

Mr. Blacklin also put his wife to work traveling about the midwest, demonstrating the latest in corset fashions. A brief typical of the time, from the Standard on Sept. 18, 1907, reports that, “Mrs. Martin Blacklin, who has been giving demonstrations for the Albert Lea Corset Co. in southwestern Minnesota and South Dakota, has returned home. The business of the company is increasing at such a surprising rate that they find it almost impossible to fill the orders without more help in their factory. They need nearly a score more of girls and are finding it almost impossible to obtain them.”

Although Mrs. Emily Blacklin’s entry in the 1905 census lists no occupation, she traveled extensively with her husband on business for Albert Lea Corset Co. well into the 1910s.